Issue no. 2, 2012 of Royalty Digest Quarterly, "a jo[u]rnal devoted to the history, genealogy and images of the Royal Families of Europe", arrived in my mailbox on 29 June, but I haven't had much time to have a look at it before now. As usual there is plenty of reading material, and I plan to bring it with me to read during my vacation.

Prince August (1867-1922), or Prince Augusto as he is also known as, reappears in the opening article, These Princes who came from Brazil, which deals with his father, Prince August of Saxe-Coburg and Gotha (1845-1907) and the latter's cousin Prince Gaston d'Orleans, Count d'Eu (1842-1922), who married the Brazilian princesses Leopoldina and Isabel respectively in 1864. Their descendants are also well covered.

Next  one out is the traditional family album by Charlotte Zeepvat, titled Habsburg - A Family Album: Part II. Dukes of Teschen and Palatines of Hungary. Following a short introduction, the readers can enjoy 94 images of royals and palaces, as well as the customary 3 pages with genealogical charts.

The former Imperial throne of Brazil gets lots of attention in this issue. Claudia Thome Witte has contributed with the article Amelie - an unknown Empress, which of course deals with Empress Amelie (1812-1873), née Princess of Leuchtenberg, wife of Emperor Pedro I and sister of Josephine, who became Queen of Sweden.

Marion Wynn then follows up with an article about the marriage of Princess Marina of Greece (1906-1968), main-titled A Royal Romance. She married Prince George, Duke of Kent, in 1934.

There are also several book reviews and one book presentation to read. Diana Mandache has been allowed to present her book Patrie şi Destin. Principesa Moştenitoare a României ("Fatherland and Destiny. The Crown Princess of Romania"), published by Litera, Bucharest. The book covers the life so far of King Mihai of Romania's eldest daughter Margarita.

Information on Royalty Digest Quarterly can be found at its editor's website Royalbooks.se. See earler presentations of RDQ here.
Posted by Dag T. Hoelseth at 20:53 1 comment: 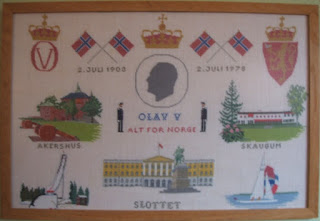 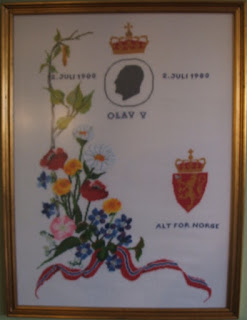 Embroideries with royal subjects are not an unusual sight, but still nice to see! The embroideries pictured above were made in connection with King Olav V of Norway's 75th birthday in 1978 (photo 1) and his 80th birthday in 1983 (photo 2 - a pity the photo quality was not better) and are displayed at Glomstad Guesthouse in Øyer municipality not far from the Olympic City of Lillehammer.

I don't think this King Harald V purse is for sale, but have to say that at least the embroidery is nicely done! The blog Linens and Royals shows photos of King George VI coronation samplers and has links to other embroidery-themed articles.
Posted by Dag T. Hoelseth at 21:31 No comments: