The christening of Prince Louis of Cambridge, son of The Duke and Duchess of Cambridge, took place in The Chapel Royal at St James’s Palace in London today, 9 July 2018. The ceremony was officiated by Archbishop of Canterbury, Justin Welby.

According to the press release the following guests attended the christening ceremony:
Prince George and Princess Charlotte were also present, while their great-grandparents Queen Elizabeth and Prince Philip, Duke of Edinburgh, were absent. As far as I know no explicit reason has been given, but it was not due to ill health.

Following the 40 minutes' long service, the guests were invited to tea at Clarence House. They were among others served slices of christening cake, which was a tier taken from The Duke and Duchess of Cambridge’s wedding cake. 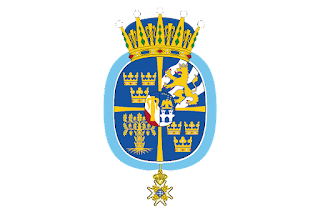 June 2018 is history. It has been a month full of royal events – among others a christening, a birth and several deaths. Normally I would have written blog articles about most of these events, if not all, but I just didn't find the time. What follows is a short summary of the most important events as I see them.

Princess Estelle was named in the guest list that was released, but had apparently got sick and was therefore absent.

From Germany HH Prince Andreas of Saxe-Coburg and Gotha, a first cousin of the king. In addition representatives of the official Sweden, court and staff as well as friends of Princess Madeleine and her husband were also present. Sponsors of Princess Adrienne were Anouska d'Abo, Coralie Charriol Paul, Nader Panahpour, Baron Gustav Thott, Charlotte Kreuger Cederlund andn Natalie Werner.

Archbishop Antje Jackelén officiated, assisted by Bishop and Chief Court Chaplain Johan Dalman and Court Chaplain and Rector of the Royal Court Parish Michael Bjerkhagen. Following the christening ceremony the guests were invited to a reception at Drottningholm Palace.

The arms of Princess Adrienne, Duchess of Blekinge: The four quarters of the arms show the lesser coat of arms of Sweden (field 1 and 4), the arms of Folkunga (field 2) and in field 3 the arms of Blekinge. The inescutcheon shows the arms of the House of Bernadotte. In addition the badge of the Order of the Seraphim.

9 June: Prince Georg-Constantin of Saxe-Weimar-Eisenach died in a riding accident near Apethorpe Palace in Northamptonshire, 41 years old. Georg-Constantin was the only son of Prince Wilhelm, a first cousin of the head of the family, Prince Michael. Georg-Constantin was survived by his parents, his wife Olivia, née Page and sister Désirée, Countess von und zu Hoensbroech. The late prince was the designated heir to the headship and his death means that the house will eventually die out in the male line.

11 June would have been Prince Henrik's 84th birthday. In his memory Queen Margrethe founded a medal which was given to members of the royal family, members of the court and staff and others who played a role in connection with Prince Henrik's illness, death and funeral. Prince Henrik's Memorial Medal is in silver and with a crown. Obverse: Queen Margrethe's profile faced right and the inscription «MARGARETA II – REGINA DANIÆ». Reverse: Prince Henrik's crowned monogram and the inscription «11.6.1934 – 13.2.2018». The medal is carried in a red cross ribbon with a wide middle stripe in white between two small stripes in gold. Go here for photos of the medal.

17 June: Prince Norodom Ranariddh of Cambodia was seriously injuried while his wife Ouk Phalla was killed in a road accident in Preah Sihanouk province's Prey Nub district in Cambodia. Former Prime Minister Prince Ranariddh (b. 1944) is the half-brother of King Norodom Sihamoni (b. 1953) and son of Norodom Sihanouk (1922–2012). Ranariddh married Ouk Phalla, his second wife, in 2010. The cremation of Ouk Phalla took place on 20 June.

18 June: Zara and Mike Tindall became parents to a daughter, who was born at the Maternity Unit of the Stroud General Hospital in Glouchestershire. According to the press release, «The Queen, The Duke of Edinburgh, The Princess Royal, Captain Mark Phillips and Mike’s parents, Mr Philip and Mrs Linda Tindall, have been informed and are delighted with the news.» Zara Tindall is the daughter of HRH The Princess Royal (Princess Anne) and Mark Phillips. Zara and Mike's first daughter, Mia Grace, was born in 2014. The baby girl, who is the fourth grandchild of The Princess Royal and the seventh great-grandchild of Queen Elizabeth and Prince Philip, Duke of Edinburgh, was later named Lena Elizabeth.

19 June: HH Princess Elisabeth of Denmark, the eldest daughter of Hereditary Prince Knud (1900–1976) and Hereditary Princess Caroline-Mathilde (1912–1995), died at 6.15 p.m. after a long illness, surrounded by her closest family, 83 years old. Princess Elisabeth, who for 45 years worked for the Danish Ministry of foreign affairs, was a first cousin of Queen Margrethe of Denmark and a second cousin of King Harald of Norway. Princess Elisabeth never married, but lived with filmmaker and director Claus Hermansen (1919–1997) for many years. Her younger brothers were Prince Ingolf (later Count of Rosenborg), b. 1940, and Prince Christian (later Count of Rosenborg) (1942–2013). They grew up at Sorgenfri Palace in Lyngby outside Copenhagen. Princess Elisabeth moved back to the palace in 2015. It has not been explicitly stated whether she died at home or in a local hospital.

The funeral service took place at Lyngby Church, where also her christening and confirmation took place, on 25 June. Queen Margrethe, Princess Benedikte and Queen Anne-Marie of the Hellenes were present, in addition to Count Ingolf and Countess Sussie of Rosenborg and Princess Elisabeth's niceses Josephine, Camilla and Feodora af Rosenborg (daughters of the late Count Christian of Rosenborg). See photos here. The urn with the ashes of the princess will be interred at Lyngby Cemetery next to the grave of Claus Hermansen.

20 June: It was announced that the christening of Prince Louis of Cambridge will take place on Monday 9 July 2018 in The Chapel Royal at St James’s Palace in London. Prince Louis will be christened by The Archbishop of Canterbury, the Most Reverend Justin Welby.