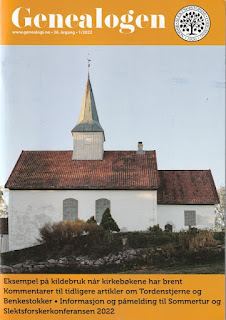 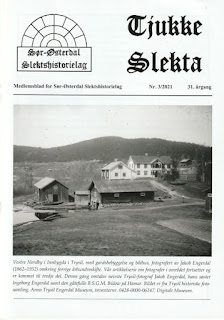 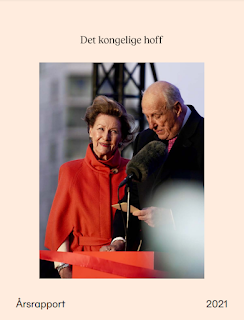 The Norwegian Royal Court's annual report for 2021 was published on 25 April 2022. It has been a while since last time I wrote about the release of the annual report. As I have commented on before, it is not always possible for me to write blog articles the same day (or the day after) something major or otherwise newsworthy has happened. There are so many other things I have to attend to as well. It is easier to review a genealogical periodical or a book as the time pressure is not that great. Anyway, commenting on an annual report 9 days after it has been published is not that bad, is it?

I have commented earlier that if it hadn't been for the perhaps less appealing accounts for the Civil List, the annual report is a good compensation for lack of the royal yearbooks which are not published anylonger. You get a good survey of the royal family's activities during the year in question.

The Lord Chamberlain, Gry Mølleskog, who will leave her position later this year, opens the report with a few words about the main events of 2021. Then we get a very detailed report on how the royal court is organised and their main activities last year. Other chapters include the Crown Prince couple's activities, the Royal Diary 2021, cultural heritage, the security project, the King and the Defense, the change of government, the state visit from the Netherlands, the events marking the 10th anniversary of the terror attacks in Norway in 2011, finances, and management, equality and environment, health and safety, royal orders and medals and royal trusts. The last page gives a list of explanations to various words and expressions one mets at the court, like the civil list and protocol.

From the press release one can read among others:

The report is intended to provide better information about and increase understanding of the activities of the Royal House of Norway and the Royal Court. [...]

Just as in society at large, the restrictions associated with the COVID-19 pandemic have continued to affect the activities of the Royal House of Norway and the Royal Court in 2021. Nonetheless, a high level of activity has been maintained. The Royal Family visited 8 counties and 31 municipalities in person and paid digital visits to 3 counties and 13 municipalities. There were 50 meetings of the King in Council of State held at the Royal Palace, and 27 formal audiences were given to receive ambassadors from other countries. In November, Their Majesties The King and Queen were the hosts for a State Visit by the King and Queen of the Netherlands, and His Royal Highness the Crown Prince paid an official visit to the US.

Activities under the project to enhance security at the Royal Palace and the other Royal residences were extensive in 2021, and major portions of the project were completed during the course of the year. The high level of activity has resulted in a planned budget deficit which is covered by previously set aside appropriations to the project. The project was commissioned in 2016 by the Ministry of Justice and Public Security in response to a security analysis carried out by the National Police Directorate from 2012 to 2015, and is expected to be completed in 2022.

The security project has a budget framework of NOK 623.8 million. As the project has progressed, a number of factors have proven to be more complicated than in the original specifications set out in the preliminary project. As a result the project has been somewhat delayed and has required greater outlay than planned. These factors were related both to geological conditions and to the management of cultural heritage. Alongside this, the COVID-19 pandemic has led to problems with the delivery to Norway of the materials needed, a rise in prices and a lack of qualified craftspeople. In the first quarter of 2022, one of the project’s three primary suppliers filed for bankruptcy, which also entailed greater costs. The cost projections are higher, and funding in excess of the cost framework will be required.

The planned deficit for the security project is NOK 129 144 266, which is covered by previously set aside appropriations. Per 31 December 2021, the project accounts show NOK 19.6 million in unused funds.

As anticipated by the Royal Court in its statement on the annual accounts submitted for 2020, there was a calculated deficit in the accounts for 2021. This deficit amounts to NOK 4 704 497. Due to the restrictions imposed during the COVID-19 pandemic, a number of measures could not be carried out during 2020, and these were completed in 2021. More than NOK 8 million have been used for renovation and maintenance projects in connection with the Royal residences and parks in 2021.

Operating costs for electricity were NOK 3.7 million higher than in 2020, which amounts to an increase of 111 %.

The annual report and accounts of the Royal Court for 2021 have been submitted to the Presidium of the Storting, the Ministry of Local Government and Regional Development, and the Office of the Auditor General of Norway.

As usual many orders and medals were awarded during 2021. The section for the recipients of the  Royal Norwegian Order of St. Olav lists 17 people, compared to 13 the previous year. King Willem Alexander received the Grand Cross during his visit here, while the Lord Chamberlain Gry Mølleskog was among the three recipients of the Commander with star. 56 people received the Royal Norwegian Order of Merit, all classes combined, compared to 89 in 2020 and 57 in 2019.  The Order of Merit «is conferred on foreign and Norwegian nationals as a reward for their outstanding service in the interest of Norway». Most of the recipients were diplomats, and some of the orders were awarded to representatives of the Dutch Royal Court in connection with the official visit. No-one received the Medal of St. Olav in 2021, while 47 persons received the King's Medal of Merit, compared to 46 in 2020. The medal is conferred as «a reward for service in the fields of art, science and industry and for outstanding public service».

The King's Commemorative Medal, which is conferred for particularly meritorious service to the king, was in 2021 given to 32 people, compared to only 9 people in 2020.

Previous articles on the subject of the Norwegian Royal Court's annual report: