The latest issue of Royalty Digest Quarterly (no. 4, 2012) was waiting for me in my mailbox when I returned from my Christmas break on Boxing Day (26 December). I enjoyed reading the magazine today, and my first impression was that the topics in this issue were much more varied and interesting than in the previous one.

The magazine's editor and publisher Ted Rosvall used his column to reflect on the British Queen Elizabeth II and the Duke of Edinburgh's 65th wedding anniversary earlier this year. A list of other long-lasting royal weddings was added.

Roger Lundgren, royal commentator and editor of Kungliga Magasinet, published in 2007 a biography about Princess Sibylla of Sweden, née Princess of Saxe-Coburg and Gotha, mother of King Carl XVI Gustaf (Albert Bonniers Förlag, ISBN: 978-91-0-011112-0). The biography is one of too many books in my library that I still haven't found the time to read (which says nothing about the biography, I must add). Lundgren has now written a short version for the magazine titled Princess Sibylla - A Royal Destiny.

The RDQ's historical consultant, Charlotte Zeepvat, has as usual made several contributions. Her first article is titled 'A cuttle  fish has been captured off Boffin Island' ... on the trail of a forgotten royal visit, and tells the story of the then Princes Albert Victor and George's tour of North Wales in June 1875. Zeepvat's second contribution is the part IV of Habsburg - A Family Album: The Emperors of Austria and Kings of Hungary. In addition to the traditional short introduction the reader can enjoy as many as 78 images as well as 5 pages with family tables.

Elizabeth Jane Timms, who according to the public part of her Facebook page is a writer and historian specialising in European royalty with a particular focus on the family of Queen Victoria, has written the article Elm Grove - The Battenberg House at Walton on Thames.

In RDQ no. 3, 2012, Edward W. Hanson wrote about the will of Queen Marie Amélie of Portugal, while he this time has chosen to focus on the will of Philippe, Duc d'Orléans. In my opinion one of the most interesting articles in this issue. The first prize should go to Christophe Vachaudez, however. He has interviewed HSH Princess Sophie of Hohenberg - a great granddaughter of Archduke Franz Ferdinand - about the confiscated castle of Konopiste and her struggle to get the property returned. Princess Sophie presents her case at her own website.

Ove Mogensen has traveled all over Europe to take photographs of royal graves, and his contribution to the Toms, Graves and Monuments section is on Tatoi and its Royal Burial Ground, i.e. the last-resting place for (as of today) 22 members of the Greek Royal Family.

Michael L. Nash focuses on the British Royal Family's Hannover roots and connections in his article The Prince of Hanover in Court. The article is absolutely worth reading, but I only wish a few errors could have been dealt with before the magazine was published. For instance, Prince Ludwig Rudolph (1955-1988) did not renounce "his rights of succession for himself and his descendants to the Throne of England" (!). He lost them automatically when he married the Catholic Countess Isabella von Thurn und Valsassina-Como-Vercelli in 1987. I am not sure if his son Prince Otto Heinrich has been raised Lutheran or Catholic, though.

Lucas Szkopinski has authored the obituary of Princess Maria Krystyna Habsburg (Princess of Altenburg) (1923-2012), the daughter of Archduke Karl Albrecht of Austria and Alice Ankarcrona, while Charlotte Zeepvat returns with her third contribution, this time dealing with Saxton Elizabeth Winter (1855-1936), who was a governness at the courts of the Netherlands (Princess Wilhelmina, later Queen), Wied (Princesses Luise and Elisabeth) and Romania (Prince Carol, later King Carol II).

In addition the readers will find the basic facts about the forthcoming 2013 Royalty Weekend, which will take place at Ticehurst, East Sussex, on 6-7 April 2013. I attended in 2011 and plan to attend again in 2013. You can also find advertisements for forthcoming titles from Rosvall Royal Books: Prince Michael of Greece' Eddy & Hélène ... an impossible match, Randi Buchwaldt's Axel & Margaretha. A Royal Couple and Harold Brown's Personalities. Royalty and Celebrity in the 1870s.

If you wonder, the front cover shows a photo of  Archduchess  Maria Josepha with her sons Archdukes  Maximilian (left) and Karl (the latter the last Emperor of Austria).

Information on Royalty Digest Quarterly can be found at its editor's website Royalbooks.se. See earlier presentations of RDQ here.
Posted by Dag T. Hoelseth at 21:30 No comments:

I left Oslo on Saturday 22 December in order to celebrate Christmas with my family in Sandefjord, and even though I was connected to the Internet most of the time (too often, perhaps) during the Christmas weekend, I had decided to take a break from blogging and website updating. I had long days at work on Thursday 27 and Friday 28 December, so here comes finally a short summary of the events I find worth mentioning. 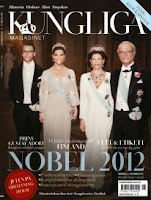 After long days at work it is great to have a little vacation and to celebrate Christmas with my dear ones. I hope to get some time to read during the Christmas weekend, and one of the items on my reading list will be the 5th issue of the Swedish royal magazine Kungliga Magasinet. I missed out on issue 3 and 4, so it will be interesting to see how the magazine has developed (go here for my comments on the magazine's first issue). In the latest issue you can read about the Nobel party, King Carl XVI Gustaf's father Prince Gustaf Adolf, Queen Silvia's visit to Finland, the Portuguese pretender Duarte Pio, Duke of Braganza, Princess Madeleine and Chris O'Neill's engagement, Prince Lakshyaraj Singh Mewar and much, much more!

I have also bought the latest issue of the Swedish ice hockey magazine Pro Hockey, which first of all deals with the National Hockey League. Oh, how annoying isn't the current NHL conflict!

In addition I have several books waiting to be read on my Kindle device, including several Rizzoli & Isles crime novels by Tess Gerritsen. Maybe I will get a book or two for Christmas as well? If not, I have 3 book gift cards ready to be used after Christmas. At my work we arrange a wine lottery at lunch every Friday. The person who wins the first draw gets one red wine and one white wine, while the third and last bottle of red wine goes to the winner of the second draw. But if you don't want any wine for whatever reason, you can get a book gift card instead. So, on the last two Fridays I have won 3 gift cards. Oh, there are so many books I would love to read, including the new Queen Sonja biography and Anders Heger's biography about Thorbjørn Egner.

I wish all my blog readers a Merry Christmas and all the best for the new year!
Posted by Dag T. Hoelseth at 10:43 2 comments:

Condolences from King Harald to the President of the USA

King Harald of Norway has in a letter to the President of the USA, Barack Obama, offered his condolences following the Sandy Hook Elementary School shooting last Friday (14 December):

The Honorable
Barack Obama
President of the United States of America
The White House
Washington, D.C.

I was shocked and saddened by hearing the news about the tragic loss of so many lives at the Sandy Hook elementary School in Newtown, Connecticut; and particularly that so many of the dead are children.

I extend to you, Mr. President, to the affected families and to the people of the United States of America my sincere condolences and my sympathy at this difficult time.

I have had another break from blogging, due to family events, Christmas preparations and genealogy work (read: The Norwegian Genealogical Society work). I will be very busy at work this and the next 2-3 weeks, but I still hope to post 2-3 more articles before the new year. There have been several news lately that I normally would have (or might have) covered, so I have decided to keep up the tradition by making a short summary:

UK: The Duke and Duchess of Cambridge to become parents

The British Royal Court announced today that the Duchess of Cambridge, to many better known as just Catherine or Kate, is pregnant. The announcement in full:


THE DUKE AND DUCHESS OF CAMBRIDGE ARE EXPECTING A BABY

The Queen, The Duke of Edinburgh, The Prince of Wales, The Duchess of Cornwall and Prince Harry and members of both families are delighted with the news.

The Duchess was admitted this afternoon to King Edward VII Hospital in Central London with Hyperemesis Gravidarum. As the pregnancy is in its very early stages, Her Royal Highness is expected to stay in hospital for several days and will require a period of rest thereafter.

The media and too many royalty-watchers have been guessing and speculating for months now, and at last they got it right. The future heir will become third in line of succession to the British throne, after the Prince of Wales and the Duke of Cambridge. As the process of changing the succession law to make it gender blind is already underway, and the British government has declared that the law will be retroactive, the ducal couple's firstborn will inherit the throne regardless of its sex.

As the pregnancy is in its very early stages, one can only hope that everything will go well. We can now  expect months of speculations over the child's sex, the names he or she will get and many other aspects a royal birth in the UK may have!