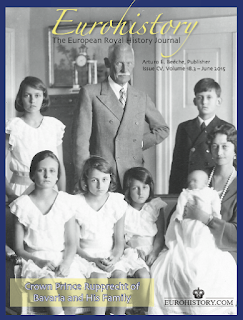 I received issue CV of Eurohistory. The European Royal History Journal earlier in October and finished reading it this week. The issue was delayed due to the printer having a "major press malfunction", as told by Eurohistory's blog on 22 September this year. I hope the magazine will come back on track soon. There is at least no reason to complain much about the magazine's contents, as I really enjoyed reading it.

The front cover shows a photo of Crown Prince Rupprecht of Bavaria and his family. Most, if not all, of the family members can be identified by comparing with other photos in the article Crown Prince Rupprecht. The Best King Bavaria Never Had (Part I) by Coryne Hall, but I still wish the editor could have given a photo caption on the following page.

The second article is titled  Frederica of Hanover.  A Passionate & Obstinate Princess (Part II) written by Marlene A. Eilers Koenig. The first part was published in issue CIV (Vol. 18.2, April 2015). Frederica (Friederike) (1848–1926) was the 2nd child of King Georg V of Hannover and Queen Marie, née Princess of Saxe-Altenburg. In 1880 she married Baron (Freiherr) Alfons von Pawel-Rammingen (1843–1932) against the wishes of her  family. The marriage was, however, supported by Queen Victoria and other members of the British royal family. All in all a well-researched and well-written article about a princess I would say belong to the group of "lesser-known royals".

Ilana D. Miller is another more or less permanent contributor to the magazine, and this time she continues her series Who Is In The Photograph with the subtitle A Gathering in Hesse, showing Prince Philip, Duke of Edinburgh, Princess Margaret of Hesse and by Rhine, née Campbell-Geddes, Landgrave Moritz of Hesse(-Kassel) and Princess Sophie of Hannover, née Princess of Greece and Denmark. The latter is of course an elder sister of Prince Philip, while Moritz was the nephew of Princess Sophie's first husband. Miller then goes on to give a presentation of the said persons and how they are related and interacted.

I have earlier commented that I would like more variation in topics in both the ERHJ and the Royalty Digest Quarterly, as I sometimes have felt that the topics are just circulated. There are so many people from so many royal, princely and mediatised houses to write about! So all of a sudden, Greg King and Janet Ashton appear with the brilliant article The Extraordinary Life of Princess Catherine Radziwill. Perfect Liar. The princess was born as Countess Ekaterina Adamovna Rzewuska in St. Petersburg in 1858 and died in New York City in 1941. She was twice married, first to Prince Wilhelm Radziwill and secondly to Karl Emile Kolb-Danvin, and is known first of all for her many books filled with behind-the-scene details and some times gossips about the various courts of Europe as well as for her extramarital affairs. I have come across her name from time to time due to her writings, but I have never read anything about her, so it was such a thrill so learn so much. Now, Radziwill is of course a well-known princely family, but articles about the family appears less often than articles about the Romanovs and the Windsors, so I was very pleased about the topic. Both well-written and well-researched. And it is only the first part! The authors' analysis of Princess Catherine Radziwill's writings is interesting: "In the last few decades [...] it has become fashionable to dismiss her as completely unreliable. But what is the truth? These books are, by turns, sympathetic, controversial, illuminating and outrageous, and many reflect Catherine's changing views and motivations. Caution is certainly advisable when considering Catherine as a source, yet contrary to current opinion careful analysis now reveals that many do contain accurate information and informed views. Outright rejection of Catherine's books – and some of their more uncomfortable content – as mere vituperative gossip, as we'll discuss in the second part of this article, does her, and history, a disservice." We really have something to look forward to!

The last article of the present issue, written by the magazine's editor and publisher, Arturo E. Beéche, covers the wedding of Prince Carl Philip of Sweden and Sofia Hellqvist on 13 June 2015. (Princess Sofia's pregnancy was, by the way, announced by the court on Thursday 15 October while I was on a work trip to Brussels and unable to write about it.) The author mixed up Prince Carl Philip's birth date (9 June 1979) with that of his christening (31 August 1979), but that belongs to the kind of mistakes which one is bound to make from time to time with so many details having to be pressed into two pages. You think one thing and write another. It happens to everyone, including me! The magazine might spend more resources on proof-reading, though, for in the Royal News section we are told that Princess Madeleine's second child, born on 15 June 2015, was named Paul Gustaf. The main name Nicolas was in other words left out. But such mistakes are far from representative when we look on the magazine as a whole.

Then there are book reviews! All written by Coryne Hall:
Finally, the traditional Royal News section, and this time the imperial, royal or princely families of Austria-Este, Hannover, Sweden, United Kingdom, Ysenburg and Büdingen as well as Osuna (Spanish ducal family) are covered. 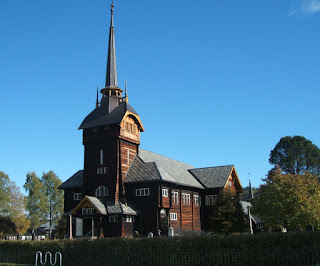 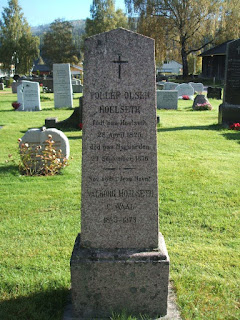 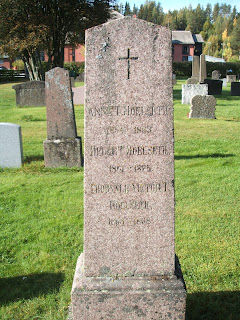 The photos were taken on the last Saturday of September 2015 when my family and I made a short stop on our way up Østerdalen to Trondheim. I have visited the cemetery several times over the years, but this was my first visit after I bought my present digital camera in 2004. Genealogically speaking there are many interesting graves on the cemetery, so I hope to return some time later to take more photos.

The current church building was set up in 1901 and consecrated the year after. Older photos of the church can be found on Wikipedia. According to a brochure which I received on a previous visit, the old church from 1768, situated at the same place, was demolished in 1899 to make room for a bigger one. Two even older churches were situated on a hill south of the pastoral farm in Åmot.

There are several churches in Norway named Åmot kirke (church), by the way. The church mentioned here is situated at Rena in Åmot municipality. The others Åmot churches are in Nordre Land and Modum.

For more details about my Hoelseth family, see my website. 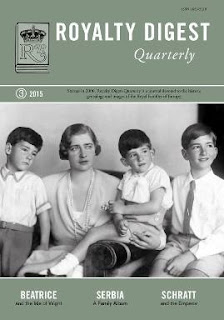 The last issue of Royalty Digest Quarterly arrived in my mailbox sometime this week while I was on vacation. I haven't read much of it yet, so this will be a short presentation rather than a review. The front cover shows a photo of Queen Marie of Yugoslavia with her sons Tomislav, Andrej (Andrew) and Petar (Peter). The photo is obviously printed because the magazine's historical consultant, Charlotte Zeepvat, this time has chosen Yugoslavia/Serbia as the topic for the traditional photo album. Her article is titled The Royal House of Serbia and Yugoslavia. Two Family Albums, because the article covers both the Obrenovic and the Karadjordjevic dynasties. Besides a four pages long introduction, the article contains 92 illustrations as well as three pages with genealogial tables. The article starts on page 24 and ends on page 55. I have a soft spot for the Eastern European dynasties and I am therefore very pleased about the topic.

The editor and publisher, Ted Rosvall, uses his Editor's Corner to comment on the recent events in Romania, where the former King Michael in August removed the titles and succession rights from his grandson, Nicholas Medforth-Mills. I am not the only person who has questioned the king's decision to set up a new law of succession for his family. I will not comment further on that discussion here, but just want to express how sorry I am for all the mess and negative headlines the king, who earlier was loyal to the principles of a constitutional monarchy, has created in recent years. Well, Romania is a republic now, and the chances of restoration is close to zero, so it is only an academic discussion anyway.

Michael L. Nash has made many contributions to RDQ over the years, and this time he has written the article The Jewels of Portugal. Another well-known royal history author is Coryne Hall, and she has contributed with the article Princess Beatrice, the Isle of Wight's true friend.

Charlotte Zeepvat's second article of the present issue is titled The Terracotta Angel, which deals with sculptural presentations of various royals, a neglected form of portraiture according to the author.

Then follows her second article, the photo album on the Obrenovic and Karadjordjevic dynasties, which has already been mentioned above.

I am not familiar with the name Stefan Haderer, but he seems to come from Austria, and his contribution is titled A highly unusual affair. The topic is the intimate relationship between Emperor Franz Joseph I of Austria and actress Katharina Schratt.

Finally, the column The World Wide Web of Royalty gives a sample of royal news since the last issue was printed. This time we can read news about the Imperial, royal or princely houses of Altenburg, Austria, Bagration, Hohenlohe-Langenburg, Lippe, Oldenburg, Saxe-Coburg and Gotha, Saxe-Weimar-Eisenach, Solms-Hohensolms-Lich and Solms-Wildenfels. Oh I so much loves the names of the German dynasties!

I have in other words a great reading time waiting for me next week. The only column I miss is the book reviews, as I also commented on last time.