UK: The Queen's Declaration of Consent to the marriage between Prince Harry and Meghan Markle 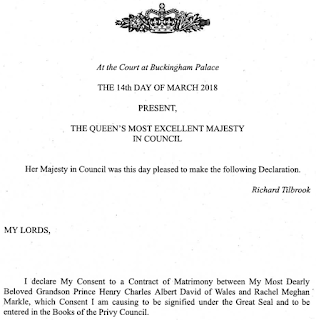 It was just a formality, but still a formality that had to take place before the wedding of Prince Harry of Wales and Meghan Markle on 19 May 2018. The website of the Privy Council has published the following declaration:


«At the Court at Buckingham Palace

THE QUEEN'S MOST EXCELLENT MAJESTY
IN COUNCIL

Her Majesty in Council was this day pleased to make the following Declaration.

I decleare My Consent to a Contract of Matrimony between My most Dearly Beloved Grandson Prince Henry Charles Albert David of Wales and Rachel Meghan Markle, which Consent I am causing to be signified under the Great Seal and to be entered in the Books of the Privy Council.»

Sweden: More about the name of Princess Adrienne

I wrote the article about the name of Princess Adrienne on Tuesday evening because I didn't have the time to blog on Monday when the Council of State, in which the name was announced, took place. But I still managed to miss out on some additional information about the name, so I will have to write another blog article on the subject.

The Swedish magazine Svensk Damtidning wrote on 12 March 2018 under the headline «Svensk Damtidning avslöjar – hemligheten bakom Madeleines namnval» («Svensk Damtidning reveals – the secret behind Madeleine's name choice») that Adrienne was a name Queen Silvia had loved for many years. According to the Swedish pastor Adrienne Riddez on her Facebook wall (her message seems to have been deleted), they met eachother some time in the late 1990s and the queen had said: «Oh, is your name Adrienne, that is such a beautiful name. I should have given that to Madeleine!» And a generation later the name was given to Princess Madeleine's third child.

The head of the information department at the Royal Court in Sweden, Margareta Thorgren, seems to have confirmed the story, but also stressed that Princess Madeleine and Chris O'Neill had chosen the name for the simple reason that they liked it. «They chose Alice after Princess Madeleine's grandmother [«mormor» – «mother's mother»] and Josephine after Chris' grandmother [«mormor» – «mother's mother»]. But the name Adrienne stands on its own.»

The last piece of information is quite interesting. Naturally most commentators, myself included, pointed at Queen Josephine of Sweden as the source of inspiration for the name. I should of course have double-checked the ancestry of Chris O'Neill before I published my article on Tuesday night. After all, some information about his family has been published at the Nobiliana forum in the thread «Ancestors of Christopher O'Neill» (too many contributors to mention them all). Svensk Damtidning, and/or Ms. Thorgren, has messed up a bit, though. It is Chris' farmor («father's mother») who was named Josephine, not his mormor: Josephine Cesario, b. around 1896.
Posted by Dag T. Hoelseth at 20:51 No comments:

In the Council of State held at Stockholm Palace yesterday, 12 March 2018, King Carl Gustaf informed his government that his new granddaughter, who was born 3 days earlier, had received the name Adrienne Josephine Alice and the title Duchess of Blekinge. The name in daily use would be Adrienne.

As usual the choice of name immediately became a debate topic in newspapers, TV, blogs and other social media. It was not difficult to point at Queen Josephine, née Princess of Leuchtenberg (1807–1876) as the inspiration for the second name, and to Queen Silvia's mother Alice Sommerlath, née de Toledo (1906–1997) as the inspiration for the third name. Josephine is also the fourth name of Princess Madeleine, mother of the (now relatively) newborn princess, and also appear among the names of other members of the larger Bernadotte family. Princess Adrienne's aunt Crown Princess Victoria has Alice has her third name, as has Adrienne's great-aunt Princess Birgitta. Both Josephine and Alice are rather common names in royal European history.

But what about Adrienne? Of course it was once again a name no-one had guessed. It is has no roots in Swedish royal history and is French of origin, but considering the French roots of the Bernadotte family it is in my opinion a good choice, even if it is deemed «untraditional» in the European royal circle. So where have Princess Madeleine and Chris O'Neill taken inspiration from? In the Facebook group Royalty Digest Quarterly, its administrator – and editor of the magazine with the same name – Ted Rosvall mentioned yesterday that «The name ADRIENNE does appear in the Bernadotte family. The soon to be 102, Dagmar von Arbin, née Bernadotte af Wisborg, has two granddaughters by that name: JANA Adrienne De GEER [Gummeson] and ADRIENNE Ebba Sophie De GEER [Heurlin]. The former has a daughter named ADRIENNE Maria Madeleine Gummesson De GEER».

I followed up, after having read a Twitter message on the subject, by mentioning that one of Queen Josephine's ancestors (and of Princess Adrienne, of course) had the name Adrienne – Adrienne Dyel de Graville. There was some initial confusion about which Josephine I was actually referring to and the number of generations, and I have to take the main responsibility for that (such things happen when you write in haste during a short break), but eventually I think the connection was well settled:

And if that is not enough, Adrienne's parents were named Adrien Dyel de Graville and Adrienne Dyel de Vaudroque. However, we should take some reservations about the eldest generations, as the tweet mentioned above based its information on the ancestry table given in the Wikipedia article about Empress Josephine, and as of today it is completely without sources.

There are also other Internet pages which either gives details about Adrienne Dyel de Graville and or mentions the connection between her and the Bernadottes, such as Geneanet.org and Généalogie et Histoire de la Caraïbe, including «G.H.C. Numéro 54 : Novembre 1993 Page 890» and «Généalogie et Historie de la Caraïbe No 115 Mai 1999» (rtf file)). The website covering French-Caribian genealogy seems to be rather serious, but unless my somewhat limited understanding of the French language has failed me, I can't find any sources stated there either.

I should add that the genealogist and author Ted Rosvall in his book Bernadotteättlingar (2010) shows on p. 114 Queen Josephine's ancestry back to Marie Françoise Boureau de la Chevallerie (1709–1787), the granddaughter of Adrienne Dyel de Graville. Chantal Cosnay is responsible for the genealogy research in France.

So, if we for the sake of the argument accepts the connection mentioned above – Adrienne of the 17th century would then be Princess Adrienne's 11 x great-grandmother, if I have not messed up the counting completely – has Princess Madeleine consulted her ancestry table in order to find a suitable name? She has most likely knows her de Geer relatives and can have taken inspiration from them. It is difficult to say for sure before she or her husband should one day in the future decide to comment on the name choice.

Adrienne is, by the way, not a very common name in Sweden, but according to Statistics Sweden there are currently (as of 31 December 2017, that is) 305 women with the name Adrienne, of whom 141 have Adrienne as their call name.

Following the birth of Princess Adrienne, the line of succession to the throne of Sweden is as follows: 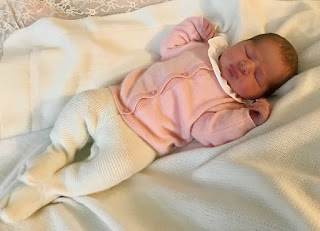 The Swedish Royal Court (The Office of The Marshal of the Realm) announced yesterday morning 9 March 2018 that Princess Madeleine and her husband Chris O'Neill earlier that day had become parents for the third time.


Announcement from HE The Marshal of the Realm

The Office of The Marshal of the Realm is delighted to announce that HRH Princess Madeleine gave birth to a healthy child on Friday 9 March 2018 at 00:41 at Danderyd Hospital.

The announcement was later followed up by a press release in which the gender of the child was revealed:

On Friday the 9th March at 00.41, Princess Madeleine gave birth to a daughter at Danderyd Hospital in Stockholm.

Mr O’Neill was present at Danderyd Hospital throughout the birth.

"We are thrilled about the new addition to our family. Leonore and Nicolas are looking very much forward to finally meeting their new little sister," says Mr O’Neill.

Salutes of 21 shots were fired at noon on the occasion of the birth . The parents returned home with their new daughter later the same day.

The newborn princess is the seventh grandchild of King Carl Gustaf and Queen Silvia. The baby has entered the line of succession to the Swedish throne as no. 10. The name and title will be announced in a Council of State to be held on Monday 12 March at 11:15. A Te Deum to mark the birth of the princess will take place the same day at 12:15.

It is more or less impossible to predict what name Princess Madeleine and her husband has decided on. Neither Leonore or Nicolas were traditional names in Swedish royal history. But maybe the couple will surprise us with Martha or Eugenie this time?
Posted by Dag T. Hoelseth at 17:39 No comments: