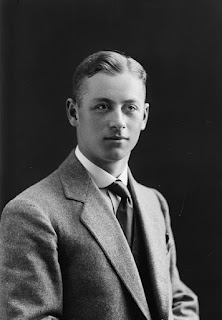 My first reply was that James Lorentzen was James Stove Lorentzen (1921–1998), son of Axel B. Lorentzen (1884–1952). My source regarding James' grandfather was wrong, but I corrected this in my second reply, where I gave more details. I had heard about the said James Stove Lorentzen (one of several members of the family who had this name) and his son, who is an active member of the Conservative party here in Oslo, before, but I had not paid much attention to him. Because the Lorentzen family of Holmestrand is large, I had just assumed that Erling and James Stove belonged to the same shipping family, but from different branches. Now I know that the two shipping families with the same name and who both come from Denmark originally, have no connection to each other.

At least two books have been published about the Lorentzen of Drammen family, but so far I had not seen any genealogical work that covered all the branches. Because I wanted to know for sure which people belonged to the Holmestrand family and which people belonged to the Drammen family, I decided to do the research and set up a survey myself. The Drammen family has many interesting connections to other well-known Norwegian families, including Gude, Tidemand, Bache, Bruun, Ditlev-Simonsen and Lange. The oldest branch is still involved in shipping.

The project gradually changed from only containing genelogical details to also including short biographies, some larger than others. Of course the biographies depend on how much information it has been possible to gather. It has been a challenge to find details about some of the female members. Some of them surely have interesting stories to tell, but I haven't found much about them in print. Another challenge has been to find photos which are not copyrighted. I hope to add more later, but I guess I would have to ask some of the famili members directly. But I have found two free-licensed photos and also received permission to publish two photos of Ragna Gundersen, née Lorentzen (1904–1995) and Oscar Christian Gundersen (1908–1991). The latter was among others Miniser of Jusstice in the second and fourth Gerhardsen government and was a Supreme Court Justice in two periods. In the article the living members are excluded for privacy reasons.

I am already working on a larger update to include more details about Jørgen Lorentzen's Danish ancestors, and have also updated a few minors errors, one of the advantages of the wiki format. The article can be updated and improved whenever deemed necessary.

It always give me pleasure to compile genealogies like thios one, even if I have no personal connections to the family. Then Lorentzens of Drammen have been among the major shipping families in Norway for generations and I am sure the genealogy will also be of interest to others. And of course I am already thinking about new genealogy projets. I hope, among others, to publish an article about the Hoelseth family some time next year (in a genealogical periodical, not Slektshistoriewiki), and I have several ideas for genealogies at Slektshistoriewiki as well.