According to Petra. Jordan News Agency, the small wedding ceremony took place in the United Kingdom, attended by Queen Noor, Jordan's ambassador to the United Kingdom, Omar Nahar, and members of the Donovan family. No further details about the location of the wedding ceremony are known at present, but I am sure they will be given later. Besides the photo in the Petra press statement, two more photos have been posted from Princess Raiyah's Twitter account. According to Princess Raiyah's tweet, the wedding was originally planned to take place in April 2020, but was postponed because of the Covid-19 pandemic.

Princess Raiyah, b. 1986, is currently a PhD candidate in pre-modern Japanese literature at the University of California, Los Angeles (UCLA), while Ned Donovan, b. 1994, is a freelance journalist. Ned's grandfather was the famous British author Roald Dahl 1916–1990), whose parents Harald Dahl and Sofie Magdalene Dahl, née Hesselberg, originally came from Norway.
Posted by Dag T. Hoelseth at 22:39 No comments:

Elvebakken is the largest and most popular high school in Oslo with 1400 students and 150 teachers.

Princess Ingrid Alexandra started at Jansløkka primary school in Asker in 2010, before continuing her education at Oslo International School at Bekkestua in Bærum in 2014. In 2019 she switched to Uranienborg School close to the Royal Palace for her last year of junior high school (lower secondary school).

I paid Vestre gravlund (Western Cemetery) in Oslo a short visit on Thursday 2 July in order to fulfill a Findagrave.com photo request. I had made a long list of graves to take photos of for my last visit in April this year, but discovered after my visit that I had missed one grave. So I did «my duty» today and will upload the photo at Findagrave.com soon. The photo is not included in this short article, though. Except for the photo request I had no plan for today's visit, so there are no particular reasons behind choice of grave photos. I took some more photos that are not included here. 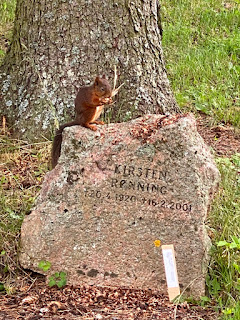 Squirrels are everywhere to be seen in the cemetery, but I have never managed to take a decent photo of one until today, and this little fellow was even taking a snack on top of a headstone! Grave of Kirsten Rønning (1920–2001). 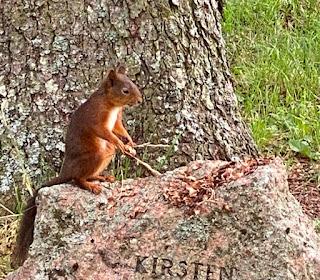 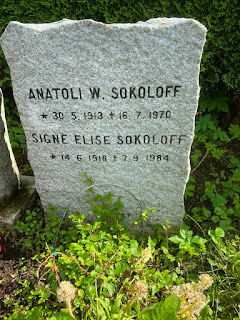 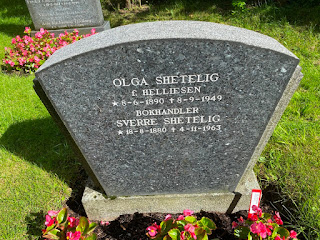 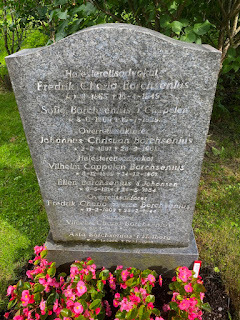 Borchsenius family grave. I am distantly related to the family through Sofie Cappelen (1869–1939), whose name is no. 2 from the top. 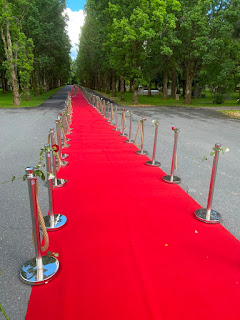 The funeral service for René «Roma» Karoli (1963–2020), a leading member of the Norwegian Roma family Karoli, who died on 21 June, took place at Vestre gravlund kapell (Western Cemetery Chapel) earlier on 2 July, followed by burial in the Karoli family grave. When I passed the grave there were still mourning family members present, so the photo of the grave is of last year. The family had rolled out a long red carpet from the chapel to the grave. Buried in the grave are Polykarp Karoli (1916–2001), his wife Lola Karoli (1918–1996), their grandson (and one of René's sons) Daimens Kaikoni (1985–2017) and now also René. Their legal names, the names in the Public Register and in the cemetery register, were Pål Karlsen, Eva Karlsen and Pål Johansen respectively. I am not sure at present wether René was legally surnamed Karoli or Karlsen. Should add that the cemetery register says that Lola was born om 27 July 1918, while the headstone says 15 January 1929. Polykarp was according to the former source born on 26 December 1916, while the headstone says 24 December. 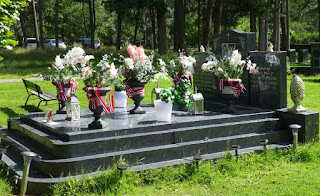 I have called this article «Vestre gravlund (Western Cemetery), Oslo, Norway, Part IV», but I have written more articles with photos from this cemetery, but under other subject titles, so the present article could have been named «Part VIII» ... Follow the link for more details.

It was confirmed today that Princess Märtha Louise holiday home Bloksberg in Fredrikstad has been sold. The property was put on the market in August 2018, but it has obviously taken some time to find the right buyer at the right price. In 2018 the property was valued at NOK 35 millions.

The selling price has not been disclosed, but will be revealed when the title deed has been registered.

The then Crown Prince Olav bought the property in 1949, as Grunnboken (the Land Registry) reveals (not in 1947, as the Norwegian newspapers claim). Bloksberg was transferred to Princess Märtha Louise in December 2001.
Posted by Dag T. Hoelseth at 22:06 No comments: