Succession mess in the Royal House of Serbia

On Thursday 28 April 2022 it was revealed that Prince Peter of Serbia, eldest son of the head of the Royal House, Crown Prince Alexander, had renounced his rights to the Serbian throne the previous day.

The question about succession to the Serbian throne is of course only academic interest, as Serbia is a republic and unfortunately the chances of a monarchical restoration are very small. The Kingdom of Yugoslavia was formally abolished in 1945, and since the 1990s the country has been divided into several independent countries, among them Serbia. So it makes more sense to refer to the Crown Prince and the other members of the Royal House as «of Serbia» and not «of  Yugoslavia». The official website is headlined «The Royal Family of Serbia», by the way.

The information about the renunciation came in form of a message posted by a person named Astrid Beatriz in the Facebook group Royalty Digest Quarterly. The translated statement by Prince Peter said among others that «By the act of abdication, I renounce for myself and all my descendants who were born or will be born in a marital relationship or out of wedlock. I transfer all the rights based on the birthright to the next one born after the eldership, my brother  Kraljevic (prince) Filip, which is an automatic process with this abdication and our sovereign wills; I do not waive the rights arising from the right to inherit the name, member of the Royal House, the title of Prince and all other rights and obligations that law and tradition give and impose on a family member».

The renunciation document was signed in Seville in Spain, where Prince Peter lives and works, with among others his sister Princess Maria Da Gloria of Orleans and Braganza and Duchess of Segorbe, his brother and sister-in-law Prince Philip and Princess Danica as well as representatives of the Orthodox Church of Serbia, as witnesses. Prince Peter said in the statement that he had informed his father the Crown Prince about his decision.

Prince Peter has given no clear reasons for his decisions, but considering the fact that he lives and works in Seville and has shown little interest in role the royal house plays in Serbia, it makes sense that he leaves the future headship to his younger brother Prince Philip, who lives in Belgrade, has married a Serbian woman and who already has produced an heir, Prince Stefan. I was puzzled by the way the renuncation came, as his father was not present when the document was signed. And today we got the following statement from the Crown Prince's Office:

STATEMENT FROM THE ROYAL PALACE OF SERBIA REGARDING HEREDITARY PRINCE

Regarding the most current events in the Royal Family of Serbia’s line of succession, and the withdrawal of HRH Prince Peter from the position of Hereditary Prince, HRH Crown Prince Alexander, as the Head of the Royal Family, issued the following statement:

“Concerning the withdrawal of my oldest son Prince Peter from the line of succession, I wish him all the best for the future, good health, and happiness. I appreciate his honesty regarding the tough decision he made.

This issue was brought to me quickly, while I am abroad, due to previous obligations. Unfortunately, such a crucial and important procedure was not followed properly, in accordance with the tradition and rules of the Royal Family, and the Family Rulebook, which was written in the time of the Kingdom, and which all members of the Royal Family need to follow. This occurrence and procedure did not take place at the Royal Palace, in Serbia, with my presence and authority as the Head of the Royal Family, with the blessing of our Holy Church and with Crown Council participation in the process, but in a foreign country, without a good reason for performing such important matter away from our homeland.

The Royal Family of Serbia will continue to serve the people with dedication, honesty, and loyalty, which is the obligation and duty for us”, stated HRH Crown Prince Alexander.

The texts of the Constitution of the Kingdom of Yugoslavia, the Serbian Royal Family Book of Rules, 12 September 1909 and the Yugoslavian Royal Family Book of Rules, 5 April 1930 can be found in the important documents section of the official website. The documents used to be at my old website (I was the one who provided the English text of the Constitution to the Crown Prince, by the way), so I will try to get those pages back and running soon.

The documents are of course not legally binding anylonger, but it seems that most members of the Royal House has respected the regulations and the headship of King Peter and later Crown Prince Alexander since the monarchy was abolished in 1945. It is a bit sad that Prince Peter could not show his father more respect and get things sorted out «the right way». The Crown Prince has been subjected to a fait accompli, so some way or another he has to accept his son's decision. But now we have a situation where there is an unilateral and «unconstitutional» renunciation and as of now we don't know if Prince Peter would be willing to respect his father's wishes for a procedure in accordance with the family rules. I really hope the mess will be sorted out eventually.

Updated on Sunday 1 May 2022 at 02.10: One paragraph was edited, as it has come to my attention that no members of the Crown Council was present at the renunciation ceremony after all, cf. Marlene Koenig's updated blog article. She also writes that «Serbia media identified  Nikola Stanovic as the Crown Prince's Chief of Staff.  He is not Crown Prince Alexander's chief of staff. Ljubodrag Grujic, who served as the Crown Prince's Herald, and was present for the ceremony,  is no longer in that official position.» 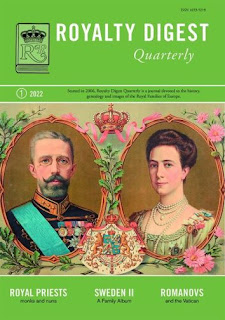 I received my copy of the lastest issue of Royalty Digest Quarterly – no. 1, 2022 – about a month ago. I have been involved in several genealogy projects since then, so my blog was put on hold for a while. I am almost always involved in various genealogy projects, so I guess it is a bad excuse, but I am enjoying my genealogy research so much ...
Anyway ... The editor Ted Rosvall usually stays away from politics in his Editor's Corner, but this time he has made an exception. He has chosen to comment on the ongoing war in Ukraine and ends by writing: «Royalty Digest Quarterly stands behind the Ukrainian people and their brave leaders in their struggle for a free and independent Ukraine». So do I! Most members of «the European Royal Family» have shown sympathy with Ukraine in various ways since the Russian invasion in February. It cannot have been easy for Grand Duchess Maria of Russia, whose family ruled the Russian Empire, which included what is nbow the Russian Federation and Ukraine, for several hundred years, but I think she made her views on the war clear in her statement of 24 February.
There are two church-related articles in this issue. Edward W. Hanson shows in his article Royal Priests, Monks and Nuns that quite a few royals, especially members of Catholic families, have taken holy vows throughout the years. The author Edward Hanson is an historian as well as a priest in the Church of England, so I can well understand that he is interested in this topic. Jonathan Iglesias Sancho and Blanca Briones Conzáles on the other hand has written an interesting piece on the relationship between the Romanovs and the Vatican.
The front page gives an illustration of King Gustaf V and Queen Victoria of Sweden, which means that the first issue of 2022 contains the second part of The Bernadottes of Sweden - A Family Album, written by the editor himself. The number of illustrations – 133 in all, if I have managed to count correctly – must be a new record in this series of family albums. In addition there is one page with a genealogical table showing the descendants of King Gustaf V.
Next one out is Michael L. Nash' enjoyable article "Collecting all the Sunshine .....". The First Modern Royal Family, which describes the wedding between Princess Mary (the Princess Royal) and Henry Lascelles (then Viscount Lascelles, later the 6th Earl of Harewood, in 1922.
Then Eric Lowe continues his series Elegant Royals – Some favorites from my collection, before Ove Mogensens tells the story of Schwarzburg-Rudolstadt in his article series Tombs, Graves and Monuments in Thuringia (part. VI).
Prince Eugen of Sweden (1865–1947) was a well-known artist in Scandinavia and also a well-liked member of the royal family. But perhaps not so well-known outside Sweden, Norway and perhaps also Denmark. He is the topic of Coryne Hall's Little-Known Royals. I really enjoyed my visit to Prince Eugen's Waldemarsudde in Sweden when I visited it back in 2006. I can really recommend it. 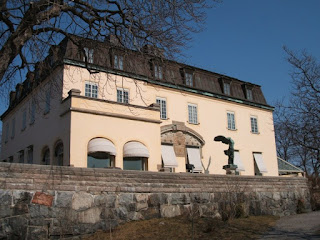 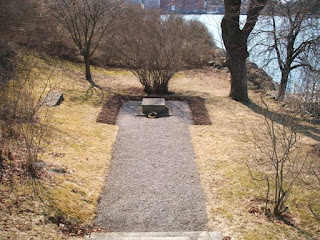 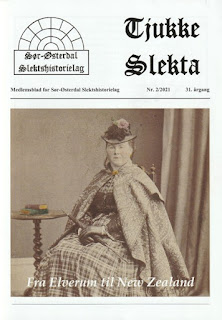