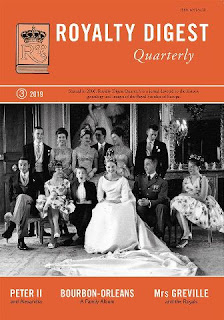 The third issue of Royalty Digest Quarterly was posted from Sweden on 25 September and I received it soon after, but I have been busy with travelling in October (Cyprus, Poland and the United Kingdom) and have also been busy with other commitments, including my administration work for Slektshistoriewiki, the Norwegian Genealogy Wiki. In other words, I have not found the time to update my blog for a while, and I am not sure if I will have much time in the nearest future either, so this will be a shorter RDQ commentary than usual.

If you wonder about the cover, it shows a photo from the wedding of Princess Diane of Orleans to Duke Carl of Württemberg in 1960, with all the «children of France», i.e. the children of the then Count of Paris (Henri, 1908–1999) and Isabella, née Princess of Orléans and Braganza (1911–2003): Seated: François, Claude, Thibaut, Diane, Henri, Chantal. Standing: Michel, Hélène, Anne, Prince Michael of Greece (first cousin and foster brother), Isabelle and Jacques.

Contents:
Marlene Koenig's article describes how the couple met and all the political discussions and quarrels in advance of the wedding. The marriage itself, which she doesn't comment on, was not a success and the couple lived separately for most of their married life. But of course something positive came out of the marriage – Crown Prince Alexander of Yugoslavia (Serbia), one of the most sympathetic royals around.

In Coryne Hall's article we meet Margaret Helen Anderson (1863–1942), who was married in 1891 to Hon. Ronald Greville (d. 1908), eldest son of the 2nd Baron Greville. She inherited her fortune from her father, William McEwan. The article describes among others her friendship with members of the Royal Family, especially King Edward VII and King George VI.

As far as I understand The November 1918 Abdications, part IV, was the last part of the series Bearn Bilker has written on the the abdications in Germany in November 1918. I have really enjoyed reading the articles.

The World Wide Web of Royalty column this time takes us to the Imperial, Royal, Princely and/or mediatized houses of Austria-Este (Belgium), Hohenberg, Liechtenstein, Lippe, Netherlands and Prussia.

Updated on Saturday 18 January 2020 at 19.25 (correcting the numeral from V to IV in the reference to Bearn Bilker's series The November 1918 Abdications).
Posted by Dag T. Hoelseth at 14:40 No comments: