The Marshal of the Realm announced earlier today that the King in the Council of State held at the Royal Palace in Stockholm had announced the name and ducal title of Prince Carl Philip and Princess Sofia's third son, who was born on Friday 26 March:

The call name will be Julian. I was not too surprised that Prince Carl Philip and Princess Sofia didn't land on a more traditional royal name. When you get so far down in the line of succession you obviously have more freedom. Personally I think the name goes well Julian with Alexander and Gabriel. It is not among the most popular names in Sweden. Julian was no. 77 in the list of male names chosen for babies born in 2020, down from no. 74 in 2019. Folke was no. 83, while Herbert was not in the top 100 list at all.

The genealogist and author Ted Rosvall has in a message in the Facebook group Royalty Digest Quarterly pointed out that Herbert is the second name of Princess Sofia's maternal grandfather Janne Herbert Ribbe Rotman (1934–1996), so that could be an explanation for the name. See my previous blog article on Princess Sofia's ancestry for more details.

The third name Folke is easier to explain, as it is the third name of Prince Julian's grandfather King Carl Gustaf Folke Hubertus. The king was named after the diplomat Folke Bernadotte, Count of Wisborg (1895–1948).

The now 2-days-old prince was born as no. 7 in the line of succession to the Swedish throne. The complete line is now as follows:

A royal birth in Sweden ... and a birth in England too!

The Marshal of the Realm announced on Friday 26 March 2021 the birth of Prince Carl Philip and Princess Sofia of Sweden's third child, a boy:

The Office of The Marshal of the Realm is delighted to announce that Her Royal Highness Princess Sofia gave birth to a healthy boy on Friday the 26th March 2021 at 11.19 a.m. at Danderyd Hospital.

Marshal of the Realm

The pregnancy was announced on 11 December 2020. The little prince, who is the 8th grandchild of King Carl Gustaf and Queen Silvia of Sweden, entered the world as no. 7 in the line of succession to the Swedish throne. Prince Carl Philip and Princess Sofia's other  childen are Prince Alexander, born in 2016, and Prince Gabriel, born in 2017. The royal birth was marked by a salute with 21 shots at noon today.

The King's decision in 2019 to «downsize» the Swedish Royal House means that the newborn boy will not be styled Royal Highness. A Council of State will be held at The Royal Palace in Stockholm on Sunday 28 March 2021 in which the name and ducal title will be revealed. One the same day there will also be a church service – a Te Deum – in connection with Princess Sofia's delivery.

Zara Tindall, wife of Mike Tindall and daughter of the Princess Royal (Princess Anne of the United Kingdom), gave birth to her third child, a boy, on Sunday 21 March 2021. The boy arrived so quickly that he was deliveded at home on the bathroom floor. The Tindall family's home is at Gatcombe Park in Gloucestershire, England. The boy, who is no. 22 in the line of succession to the British throne, has received the name Lucas Philip Tindall. The second name Philip was obviously chosen in honour of Mike's father and Zara's grandfather. Zara and Mike Tindall's other children are Mia, born in 2014, and Lena, born in 2018. The baby is Princesse Anne's fifth grandchild and Queen Elizabeth's 10th great-grandchild.

I had intended to write about the birth in England earlier, but I am just too busy at work these days due to the pandemic. Hopefully tomorrow I will be able to follow up with a blog article after the Council of State in Sweden.

Due to the pandemic, the number of people attending the funeral was limited to 30 only. From the Norwegian royal family came King Harald, who still is on sick leave following his operation in January, Queen Sonja, Crown Prince Haakon, Crown Princess Mette-Marit, Princess Märtha Louise and Princess Astrid, Mrs. Ferner. All the Ferner children were also present.

Erling Lorentzen's eldest son Haakon Lorentzen and his family decided not to travel from Brazil because  the situation there due to the pandemic is so bad at the moment. They had to follow the service on Internet instead. Lorentzen's daughters Ingeborg Lorentzen Ribeiro and Ragnhild Lorentzen Long and their husbands Paulo Ribeiro and Aaron Long have lived in Norweay since last year and could therefore attend. In addition, Ingeborg's daughter Victoria, her husband Felipe Falcão and their son Frederik had travelled from London to say their last farewell. There were also other members of the Lorentzen family present, in addition to Lorentzen's partner Ebba Løvenskiold, Princess Ragnhild's close friend Bitten Giæver-Krogh, who was Ragnhild's maid-of-honor at the wedding in 1953 and Erling Lorentzen's secretary Randi Færden. The only representative of the official Norway was Chief of Defence Eirik Kristoffersen, who held a speech in English where he among others talked about Lorentzen's war effort.

Anne Netland, who is Sjømannskirken - Norwegian Church Abroad's ambulatory pastor in Latin America and knows the Lorentzen family well from her time in Branzil, officiated the service. She spoke both Norwegian and Portugese during the service. As Haakon Lorentzen was absent, his speech was read by his cousin Einar Lie, son of Ingjerd Ragna Lie, née Lorentzen (1914–1999) and Ragnar Holm Lie (1912–1997). Brazil's Ambassador to Norway,  George Monteiro Prata, was meant to attend, but was in quarentine, so his speech was read in Portuguese by Lorentzen's son-in-law, Paulo Ribeiro. Ribeiro also said a few words on his on behalf, this time in Norwegian.

After the service, the coffin, which was draped in the national flags of Norway and Brazil, were carried out to the grave by Aaron Long, Felipe Falcão, Einar Lie, Jan Lorentzen, Crown Prince Haakon and Alexander Ferner. Erling Lorentzen was then laid to rest next to the grave of Princess Ragnhild, who died in 2012. The headstone had been made ready in advance with Erling S. Lorentzen's name, date of birth and date of death inscribed.

The funeral service was broadcast on the Norwegian TV2 with Trond Norén Isaksen as commentator and who as always did an excellent job.

The Norwegian Royal Court announced on Friday 12 March 2021 that King Harald of Norway's sick leave, which was meant to expire on Monday 15 March, has been extended until 11 April 2021. When King Harald was operated for a torn tendon above his knee on 30 January, the public was informed that the king was expected to return to duty on 15 February, but on 12 Febryary we were told that the sick leave had been extended to 15 March. King Harald is making progress and will continue his training and receiving physiotherapy.

In the meantime Crown Prince Haakon will continue to serve as regent.

The death announcement for Erling Sven Lorentzen, who died on 9 March 2021, 98 years old, was published in Aftenposten and Vareminnesider.no today. The announcement was signed by Lorentzen's 3 children, their spouses, his six grandchildren and one great-grandchild. 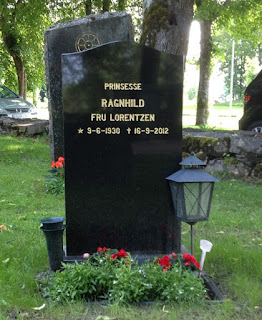 The funeral service for the industrialist Erling Sven Lorentzen, who was married to Princess Ragnhild from 1953 until her death in 2012, will take place at Asker Church on Monday 22 March 2021 at noon. Only those invited will be allowed to attend. Others will be able to watch the broadcast via Erling Lorentzen's memorial page at Jolstad.no. Lorentzen will be interred next to his wife at Asker kirkegård (Asker Cemetery).

The Norwegian Royal Court announced today the death of the shipowner, industralist and war hero Erling Sven Lorentzen, widower of Princess Ragnhild and brother-in-law of King Harald V. Erling Lorentzen died in Oslo at 01.30 a.m. on Tuesday 9 March 2021, 98 years old, after a short period of illness.

The king's condolences on behalf of the royal family: «It is with great sorrow we have received the sad message that Erling Sven Lorentzen has passed away. Our thoughts go to his closest ones, who have lost a good father, father-in-law, grandfather and great-grandfather.»

Erling Sven Lorentzen was born at Huseby in Aker (now part of Oslo) on 28 January 1923 as the youngest of six children of the shipowner Øivind Lorentzen, Holmestrand (1881–1980) and Ragna Nilsen, Hamar (1885–1976). During the war he joined the so-called «Kompani Linge» («The Linge Company», i.e. the Norwegian Independent Company 1 (NOR.I.C.1), a British SOE group formed by Norwegian volunteers) in Scotland where he received military training before becoming regional commanding officer in Hallingdal in 1944. When the royal family returned from exile following the end of the war in 1945, Lorentzen served as one of their bodyguards. He met and fell in love with the the Crown Prince Olav's eldest daughter Ragnhild, who was 15 years old at the time. They corresponded while Erling studied at Harvard Business School. The couple was finally allowed to marry in 1953.

After the wedding in Asker Church on 15 May 1953 the couple settled in Brazil where Lorentzen became a successful business man. In the first years he owned a gas distribution company, before he went into the cellulose business, owning a large share of Aracruz Celulose S.A. and working as its executive chairman for many years.

Erling Lorentzen and Princess Ragnhild had 3 children – Haakon, Ingeborg and Ragnhild – as well as 6 grandchildren. Princess Ragnhild died in 2012 and was buried at Asker Cemetery, where it is also expected that Lorentzen will be laid at rest. After her death Lorentzen continued to live in Brazil, but usually spent the summers in Norway, either at his summer place at Ostøya in Bærum or at his childhood home in Husebyveien in Oslo. The last fall and winter was spent in Oslo. He was an active and vital man to the last. As late as in December 2020 he strongly critizised the TV series «Atlantic Crossing» in a letter to the editor of Aftenposten.

I never met Erling Lorentzen, but exchanged a few e-mails over the years, and he was always forthcoming when I asked for assistance to my genealogy inquiries. He had lived a long and rich life and one should of course not be too surprised when he passed away at the age of 98. Still, I had somehow expected that he would at least turn 100, as he said himself that he aimed for! His father was 99 years old when he died, and his elder brother Øivind Lorentzen, Jr. died in March 2020, 101 years old.

The Norwegian Minister of Defence, Frank Bakke-Jensen, said today: «One of our last war heroes from WW2 has passed away. His war effort, his will to defend his country and his imparting of knowledge to the younger generations will stand as a monument.»