Sweden: Changes to the Royal House 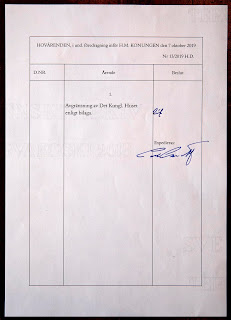 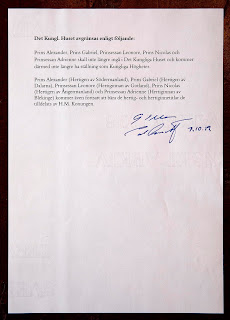 
His Majesty The King has decided on changes to The Royal House. The purpose of these changes is to establish which members of The Royal Family may be expected to perform official duties incumbent on the Head of State or related to the function of the Head of State.

Prince Alexander, Prince Gabriel, Princess Leonore, Prince Nicolas and Princess Adrienne will continue to be members of The Royal Family. However, they will no longer enjoy the style of Royal Highness and, in the future, will not be expected to perform duties incumbent on the Head of State.

Their Royal Highnesses Prince Carl Philip and Princess Sofia, and Her Royal Highness Princess Madeleine will continue their work in the non-profit foundations and organisations which they have founded or in which they are involved. In addition, they will perform official duties to the extent decided by His Majesty.

OFFICE OF THE MARSHAL OF THE REALM

Fredrik Wersäll
Marshal of the Realm

I was not very surprised by the news – the downsizing was bound to happen some day – but the timing was odd. It had made more sense if the king had clarified the membership prior to the birth of Princess Leonore. As the royal children in question were never expected to take on official engagements, I have earlier on several occasions (see for instance my article of 14 September 2013) said that I would have preferred if they hadn't got any titles at all. Only royals expected to represent the royal house should have titles. The Swedish king has now made a system which somewhat resembles the Norwegian, where those who are styled Majesty or Royal Highness are members of the royal house, while the others are «only» members of the royal family. The only difference is that both children of Crown Princess Victoria and Prince Daniel are styled Royal Highness, while among the Norwegian Crown Prince's children only Princess Ingrid Alexandra has that style. In addition, in the Norwegian Royal Family Prince Sverre Magnus, Princess Märtha Louise and Princess Astrid Mrs. Ferner are styled Highness while abroad (but not in Norway – although the Royal Court has never given a satisfactory explanation to this, I guess the decision was made because titles and styles means more abroad than at home).

In the press conference which followed the announcement, the Marshal of the Realm among others stressed that the prince(ss) and ducal titles for the royal children in question were personal and could
not be transferred to their spouses and children.

King Carl XVI Gustaf's decision does of course not affect the line of succession. However, the question of the upbringing of Princess Madeleine's children outside the realm, cf. the Act of Succession Article 4, remains unsolved. Another question is what would happen if Prince Carl Philip or Princess Madeleine had another child. I expect that the king would make no difference and would settle on the personal title of prince/princess (and ducal title), but of course not give the style Royal Highness.

The Royal Family consists of the members of the Royal House as well as the King's other grandchildren and sisters as well as the widow of the King's Uncle Count Sigvard of Bernadotte.
The Line of Succession to the Swedish Throne