I have therefore updated my Longest reigns page tonight. I might update the page soon, as I expect that the new Crown Prince will be designated in a not too distant future. I am not too happy with the way some of the sources are listed on the website, so I might do a make-over at the same time.

Crown Prince Haakon, who serves as Crown Prince Regent while his father, King Harald, is on sick leave, will undertake the formal opening of the 165th session of the Storting – the Norwegian Parliament – on Friday 2 October 2020 at 1 p.m. His mother Queen Sonja will join him for the ceremony.

Many have already pointed out the historic occasion as this Friday it is exactly 30 years since last time a Crown Prince Regent undertook the formal opening and read the speech from the Throne. On 2 October 1990 the then Crown Prince opened the Storting as his father King Olav V had been on sick leave since May that year. And of course, Aftenposten on 3 October 1990 pointed out that the last time a Crown Prince Regent undertook such a task was in 1957 when Olav served as Regent . King Haakon VII died on 21 September later the same year. The Storting sessions were organised differently at the time, so the last time Crown Prince Olav undertook the opening as Regent was on Saturday 12 January 1957.

King Harald was admitted to Rikshospitalet (The National Hospital) in Oslo early on Friday 25 September. This meant that Crown Prince Haakon as Regent presided over the Council of State at the Royal Palace at 11 a.m. the same day, and Queen Sonja traveled alone to Lillehammer to attend the completion of Tuengen allé 1 B – the queen's childhood home – at Maihaugen Open-Air Museum. The Royal Palace informed that the king had been admitted to hospital for heavy breathing, but added that Covid-19 was already ruled out, and that king underwent a medical examination. Later the same day the public was informed that the king's health was improving while the examination continued. He was to be on sick leave until 4 October. King Harald was discharged from hospital on Monday 28 September while the hospital continued to review the king's condition.

According to the official website, King Harald will have his first public engagement on Monday 5 October when he will grant the Chief of the Royal Norwegian Navy, Counter admiral Nils Andreas Stensønes, an audience. Crown Prince Haakon will also be in attendance. 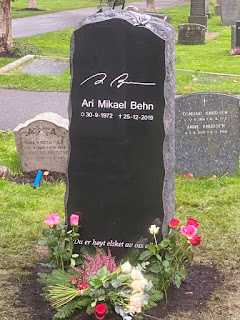 Due to the pandemic, the urn interment at Vår Frelsers gravlund (Our Saviour's Cemetery) in Oslo was postponed. The family finally decided to have a private interment ceremony on 30 September 2020, which would have been Ari Behn's 48th birthday.

On the headstone one can find his name, birth and death date and signature engraved, besides the text «Du er høyt elsket av alle» («You are much beloved by everyone»).

Sponsors at the christening in 2006 were Queen Sonja, Queen Máxima of the Netherlands, Crown Prince Pavlos of Greece, Rosario Nadal (formerly Princess of Bulgaria, Princess of Preslav), Espen Høiby, Bjørn Andersen-Steinsland and Marianne Gjellestad. As mentioned earlier, due to the pandemic and the current travel restrictions, the foreign sponsors were not able to attend, as they would have to go into quarantine for ten days upon arrival in Norway.

The ceremony was broadcast on Norwegian TV. It was a nice and traditional ceremony, despite the limitations, an the soloist, Beate Løvås Solem, made a great impression with her beautiful voice. Prince Sverre Magnus was marked by the gravity of the occasion, he had a very serious and consentrated look, but gave a great smile when he came out of the church.

After the ceremony Prince Sverre Magnus and his guests drove to the Skaugum estate nearby for a private dinner. The official website has published photos from the ceremony. Photos taken at Skaugum can be found here. According to the official website (see the latter link), Prince Sverre Magnus received several gifts from the official Norway. From the Storting (the Norwegian Parliament) the Prince received a canoe, oars and a flotation device. The government and Asker municipality gave works of art by Morten Andenæs and Magne Furuholmen (of Aha fame) respectively. The Supreme Court gave the prince a surfboard and a book about the Supreme Court, the Church of Norway gave a bible in the new translation from 2011, while the county governors gave a sleeping bag and a sleeping pad.

The office of the former King of the Hellenes today announced the engagement between Prince Philippos of Greece and Nina Nastassja Flohr. According to Hello Magazine the announcement said:

Their Majesties King Constantine and Queen Anne-Marie are delighted to announce the engagement of their youngest son HRH Prince Philippos to Nina Nastassja Flohr, daughter of Thomas Flohr and Katharina Flohr.

Nina and Philippos were engaged on the island of Ithaca in Greece earlier this summer.

The details of their wedding will be announced in due course.

The website of the Royal Greek Family has not yet published the statement. Prince Philippos, b. 1986, is the youngest son and child of King Constantine and Queen Anne-Marie. He is currently working as a hedge fund analyst residing in New York, while Nina Flohr, b. 1987, the daughter of the Swiss businessman Thomas Fohr and his former wife Katharina Konečný, has worked as a creative director of his dad's private jet charter company VistaJet and is currently listed as a director of Dodeca Holding Ltd.

Due to the pandemic it is still unknown when the couple will tie the knot. Prince Philippos' sister Princess Theodora was in November 2018 engaged to Matthew Kumar, but the wedding has yet to take place due to the pandemic.

Sources: See links. Some information or links has also been gathered from the message board Nobiliana.de (Greece/Flohr, EAG 2020, 1 September 2020).