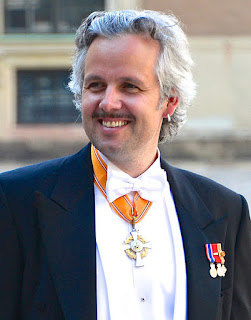 The author and artist Ari Mikael Behn, former husband of Princess Märtha Louise of Norway, died in his home in Lommedalen, Bærum on 25 December 2019. On behalf of Behn's family his manager Geir Håkonsund released the following statement in the evening on Christmas Day:


It is with great sorrow in our hearts that we, the very closest next of kin to Ari Behn, have to announce that he today has taken his own life. We ask for respect for our privacy in the future.

The Norwegian Royal Court released the following statements by the King and Queen and by the Crown Prince and Crown Princess later the same evening (in English):


The death of Ari Behn

In connection with the death of Ari Behn, His Majesty The King and Her Majesty The Queen have issued the following statement:

It is with great sorrow that the Queen and I have learned of the death of Ari Behn. Ari was an important part of our family for many years, and we will bring many warm, good memories  of him forward with us. We are grateful that we had the chance to know him. We grieve for our grandchildren, who have lost their beloved father, and extend our deepest sympathy to his parents and siblings, who have lost a dear son and brother. We ask that respect be shown for the privacy of Ari’s closest family in this difficult time.

Ari was a good friend, a much-loved member of the family and a fabulous uncle with whom we shared many of life’s precious moments. It is with great sadness we have learned of his passing. We were all extremely fond of Ari. Our thoughts at this time are with Maud, Leah, Emma, Princess Märtha Louise and Ari’s closest family.

Prime Minister Erna Solberg said among others that «I would like to express my sincere sympathy with Ari Behn's family and bereaved in connection with his tragic death. My thoughts go to everyone who was fond of him». Condolences have also been expressed by the Swedish and Danish royal courts as well as by many of Ari's friends.

The funeral service will take place in Oslo domkirke (Oslo Cathedral) on Friday 3 January 2020 at 1 p.m. The service, which will be open to everyone who wishes to attend, will be officiated by the Bishop of Oslo, Kari Veiteberg.

Ari Mikael Behn, who changed his surname from Bjørshol to Behn in 1996, was born in Århus, Denmark on 30 September 1972 as the eldest son of Olav Bjørshol and Marianne Solberg (who later took the surname Behn). He had two younger siblings. After having lived in among others England and Lavangen, Northern Norway, the family settled in Moss when Ari was 6 years old. Ari attended the Waldorf School (Steinerskolen) in Moss and later took a bachelor’s degree in history and religion from the University of Oslo.

Behn made his break-through as an author in 1999 with his collection of short stories called «Trist som faen» («Sad as hell»), which has sold more than 100 000 copies. He later among others wrote 4 novels and published 2 more collections of short stories as well as a play. While he received great reviews for his first collection, the reviews of his later works were more mixed. In the last years he achived great success with his art.

Ari Behn married Princess Märtha Louise, elder child of King Harald V and Queen Sonja, in the Nidaros Cathedral in Trondheim in 2002. They had 3 children – Maud Angelica (2003), Leah Isadora (2005) and Emma Tallulah (2008). In August 2016 the couple's separation was made public and they got divorced one year later. 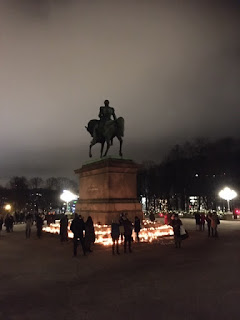 Many people have laid flowers and lit candles at the Karl Johan statue in the Palace Square in Oslo following the death of Ari Behn. Photo: © 2019 Dag Trygsland Hoelseth. 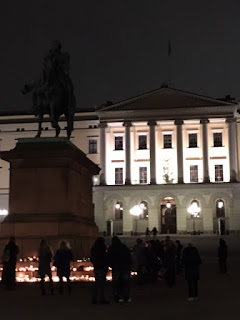 I always thought that Ari Behn and Princess Märtha Louise were wonderful together as a couple, and I was really sad when they left eachother. Behn was a colourful man who brought more life to the royal family. I never met Ari Behn. But everyone I know who met him had only good things to say about him – he was always friendly, warm and generous and included everyone. It is sad to know that he struggled and it is terrible that he felt he couldn't go on anylonger. The many expressions of praise after his death shows that he was loved and will be missed by many, not only by his closest family and friends.

He was often ridiculed because of his big words and «Bohemian style» and was called «dandy» and a bit «self-centred» and other less flattering descriptions. If people could only be more generous to eachother and accept people for the way they are and appreciate their different personalities. I guess I had my reservations about him in the beginning, but over the years I respected him more and more. He might have put up a facade sometimes, but in general he was true to himself and his ideals.

The tabloids and many royalty-watchers have described him as a controversial person. He certainly created headlines over the years – his political statements and his comments on a former royal staff member's working conditions come among others to mind – but I have always felt that his «controversial behaviour» has been exaggerated. Granted, I have myself been quoted in the press as saying – with the institution of the royal house in mind – that he sometimes created «a bit too much noise». In general I think the headlines have just been mild ripples on the water, as I have also said earlier. The king and queen welcomed Ari into their arms and have always said how fond they were of him. Naturally they gave him freedom to form his career independent of the royal family. Everyone who knows something about the royal house also know that Ari never spoke on behalf of the institution, only on behalf of himself. Obviously the king and queen and the royal family have been more generous than royalists and the royal-watching community, who tend to be more Catholic than the pope.

Ari Behn left behind his 3 children, his girl-friend Ebba, his parents, two younger siblings, other family members, his former wife Princess Märtha Louise and her family and many, many friends.
Posted by Dag T. Hoelseth at 13:34