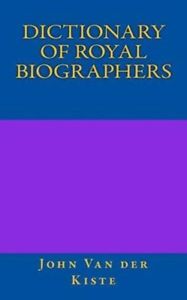 John Van der Kiste, the well-known author of more than 60 books, the majority being historical or royal biographies, is out with yet another book, Dictionary of Royal Biographers (A & F Publications, 2015, ISBN 9781517115272).

I think it will be a most useful addition to my library, as it will help me with background information on various authors when blogging or writing other articles. It has not always been easy to find information about authors, especially those still living - not everything can be found on the Internet, and it is not always easy to plan ahead and stop by a library before you go home to finish a blog article (you don't always know what you need of information before you start writing).

The dictionary includes presentations of more than 500 authors who have written and published books in English about British or European royalty from the 11th century to the present day. You will find well-known authors like Arturo Beéche, Greg King, Marlene Eilers Koenig, Ted Rosvall, Robert Lacey, Hanna Pakula, Ingrid Seward, Charlotte Zeepvat and Philip Ziegler to mention a few, and lesser known – at least to me – like Adolf Koch and Joachim Kurenberg. Many of the biographers will be presented with birth year (and death year), a short CV and a list of the biographies they have written. Some entries are of course longer and more detailed than others. Not all entries include a birth year, though. This could because Van der Kiste has failed to find it, or that he has been asked by the author to omit it, as he admits in his foreword to have done on some occasions. It is not that the birth year is really needed in all cases, but for the sake of consistency I think he should not have given in to the requests. Some people are taking desire for privacy a bit too far.

The dictionary also includes a section with royal authors of memoirs. Even Prince Andreas of Saxe-Coburg and Gotha, whose memoirs I did it my way was launched during the conference Royal Gatherings in the Hague last Saturday (7 November 2015), as far as I understand several weeks before the dictionary was published, has got an entry. Quite impressive!

Some times I wonder, though, about how one arranges dictionary entries alphabetically in English. In Norwegian I would for instance have listed Marlene Eilers Koenig under K, not E. Did any of my university teachers mention the alphabetization rules at all, I wonder ...

When limiting the dictionary to biographies published in English one misses out on many biographers who have given important contributions to the genre in the last 10 years, like for instance Tor Bomann-Larsen, Trond Norén Isaksen and many others, but of course one has to limit the extent somehow. The dictionary would need several volumes if also biographies written in other languages should be included. Two Norwegian biographers have been included, though (please tell me if I have overlooked someone) – Tim Greve (1926–1986), author of Haakon VII of Norway: Founder of a New Monarchy (1983), and Clara Tschudi (1856–1945) – as both have got some of their works translated into English. In the dictionary Greve is incorrectly listed as having been born in 1928, though. The death announcements in Aftenposten didn't state his birth year, and even the cemetery register for Haslum, Bærum only gives the death and burial information, but the church book (Johannes, Bergen) states 1926, as also confirmed by the entry in Norsk Biografisk Leksikon. I don't know which source John Van der Kiste has used, but in case he has leaned himself on the English version of Wikipedia, it can explain his mistake.

Concerning King Haakon VII mentioned above, the dictionary does not include Philip Paneth, who wrote the book Haakon VII. Norway's Fighting King in 1944. Not the most important work on King Haakon, though, but worth mentioning.

All in all, I think the dictionary includes the most important biographers and their books on European royalty. Even with some mistakes and omissions, I am confident that the dictionary will be helpful to many writers as well as readers in the years to come.