The King and Queen are in home quarantine

His Majesty The King and Her Majesty The Queen are in home quarantine as from today. This is in accordance with the Government’s new measures to prevent the spread of the COVID-19.

Neither the King nor the Queen have any symptoms.

His Majesty The King will preside over the Council of State via video conferencing tomorrow, and His Royal Highness The Crown Prince will be in attendance at the Palace.

The Norwegian Directorate of Health had earlier in the day passed new rules demanding that everyone arriving in Norway from areas outside the Nordic countries had to enter 14 days of home quarentine. The rules were given retroactive effect, which forced the king and queen as well as other members of the court and also the Foreign Minister and the Trade Minister into home quarentine because of the state visit to Jordan last week.

The court also cancelled all official events – with the exception of events strictly connected to the king's constitutional role, for instance presiding over the Council of State – until Easter. See Newsinenglish.no for more details.
Posted by Dag T. Hoelseth at 23:11 No comments: 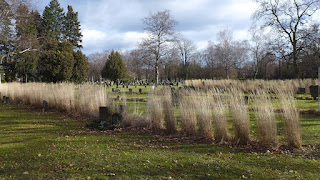 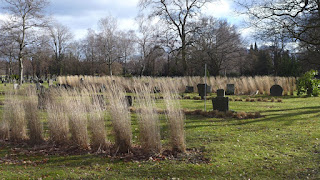 This winter in Oslo has been unusually mild. When I went to visit Østre gravlund (Eastern Cemetery) in Oslo on Saturday 22 February, there hadn't been any snow since December. Usually I wait until April or May before I bother to visit a cemetery in order to take grave photos for my blog, writing projects or for Findagrave.com. This particular Saturday was really nice, and I took the opportunity to visit two cemeteries and one private grave. As I so often say, I will come back with an article or two later on! Don't you think this part of the cemetery looks nice? I think the plants are called rush or reed in English. This section seemed to have many empty lots, in other words the leases have expired and will eventually be re-used.

My purpose for visiting Østre gravlund that particular Saturday was to help out a Norwegian-American whose relative had been married to a woman who had been buried at Østre. I knew from the cemetery register online that the lease (feste in Norwegian) had expired. From experience I know that sometimes it takes a while before the headstone is removed, so maybe the headstone was still there, waiting to be photographed? Because I didn't know the day before if the weather would permit a cemtery visit, I didn't contact the cemtery office in advance to ask for information on when the grave had expired. I didn't find the headstone in the section in question, and it later turned out that the lease had expired as far back as in 2001. But it was a good excuse to visit the cemetery anyway.

Østre is the nearest cemetery to where I live (around 4 kilometres). It serves the parishes of Grønland, Kampen, Paulus, Sofienberg and Vålerenga. Østre used to be farm land belonging to Helsfyr gård (farm). Kristiania Municipality bought the farm in 1892 and the cemetery was consecrated three years later. The cemetery has been expanded several times and has today an area of 140 decares. In 1912 10,5 decares were transferred to the Jewish congregation and was formed as a separate cemetery called Helsfyr gravlund (Helsfyr Cemetery).

Of course I have visited Østre gravound numerous times – last year I went there twice to fulfil photo requests for Findagrave.com – but with one exception I haven't blogged about the cemetery. Two cousins of my grandmother were buried there. A few «famous people» (not too many, though) are buried there as well. I promise to post more photos later on. The following grave photos were taken without any particular purpose. Either I just happened to like the headstone or I noticed that the lease was about to expire. 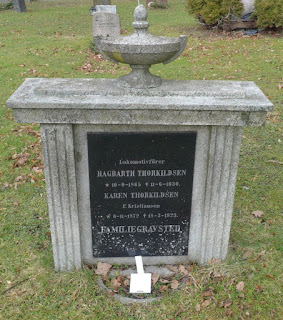 Grave of lokomotivfører (engine driver) Hagbarth Thorkildsen (1865–1930) and his wife Karen née Kristiansen (1872–1923). The cemetery register reveals that there are more people buried in the lot. 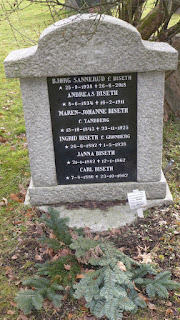 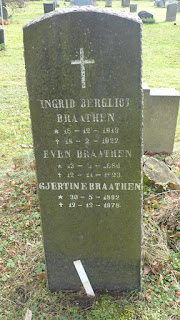 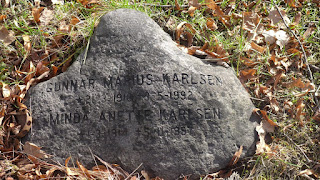 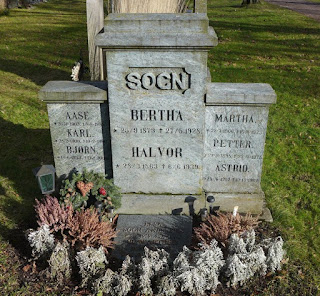 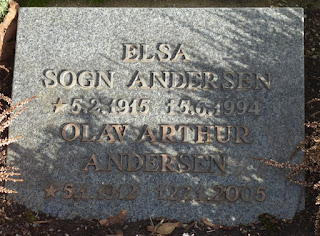 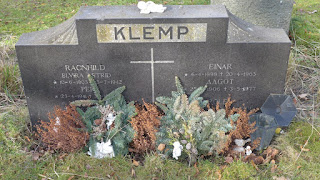 Postscript 4 March 2020: I should have mentioned that one of the Norwegian genealogical socities, Slekt og Data, runs a grave photo database which among others includes the above-mentioned Thorkildsen grave (link; you may have to double-click). In other words, even if the headstone is being removed (the lease expired in 2019), there will be photos both here and there to memkorize the grave). I could also have added that just one week after the cemetery visit we had a great snow fall here in Oslo and yesterday evening we even got more.