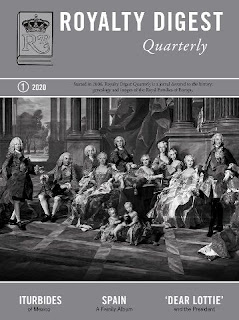 I received the latest issue of the Royalty Digest Quarterly about 6 weeks ago. I had intended both to read it and write about it some time in March, but so many things have happened in the meantime. First of all, the corona pandemic has lead to long hours at work. As the acting editor of the Norwegian Leagal Gazette, I have naturally been very much involved in the publishing of all the laws and regulations related to the pandemic. I usually do most of my reading on the subway on my way to the office and home again, but taking the subway in these times is not the best idea, so I have taken the car instead (I have done work from home as well, but it is more practical to work in the office). Most of my sparetime the last weeks have been spent with my family. And when I have got some time on my own I have worked on various genealogy projects instead of blogging.

But here we go again! It's on time! In his Editor's Corner Ted Rosvall gives some historical examples of «royal bolting» following the Duke and Duchess of Sussex' decision to step back as senior members of the British royal family. I agree with Rosvall's views on the subject: «Far be it from this magazine to pass judgement over the couple's singular decision other than to give them a reprimand over how it was done, surprising the Queen and the Crown with a fait accompli via social media, rather than discussing the matter calmly and sensibly before advertising it to the whole world». As I commented myself back in January: «It seems to have become an established fact that the Sussexes didn't respect the Queen's request that they waited with making their decision public. It certainly showed poor judgment and disrespect to the Queen and other members of the family if that was the case. There might have been good reasons for making the decision public prematurely, but I can well understand the criticism on this point.»

The illustration on the cover is of King Felipe V of Spain and his family. The magazine's historical consultant, Charlotte Zeepvat, has again returned with A Family Album where the focus is on The Royal House of Spain, with the subtitle 1: From Habsburg to Borbón. Besides the introduction the readers can enjoy as many as 99 illustrations and 5 pages with genealogical tables.

The first article of this issue, however, is written by another returning contributor, Lucas Szkopinski, who has brought us back in history to The Iturbides – a forgotten dynasty. It is not so often you read about the Iturbides these days, and it has been a while since last time I read about them. It is a great article with many nice illustrations. The booklet I have about the dynasty – The Imperial House of Mexico. The House of Iturbide by Charles Mikos de Tarrodhaza, Teodora Amerlinck y Zirion and David Williamson – is packed with text, but has few illustrations. I note that the booklet is used as a source for the article, but the author has used other sources as well. The only objection I have this time is that I feel the article was too short on Augustín Iturbide's climb to the top. Granted that he was from a noble family and a had made a career in the army, but how did he end up becoming involvd in the Plan of Iguala etc.? Concerning the illustrations, among them photos of the Iturbide family vault in Philadelphia, it is still one of my regrets that I didn't visit the cemetery during my visit to Philadelphia in 1999. I knew about the family grave, and I think I even passed the cemetery, but I missed the connection during my visit. I have to go to Philadelphia again! And Mexico too! My third visit was planned for this summer, but obviously I will have to stay in Norway instead.

As I have written many times before, I always like reading articles about royal connections (court and staff members, friends etc.) and not only about the royals themselves. Elizabeth Jane Timms has written an interesting piece about the German-born Mrs. Louisa Louis (1771–1838), once a member of the household of Princess Xharlotte, daughter of the Prince Regent and later King George IV, but who also became close to Queen Victoria.

The next one out is The Six Stunning Infantas – Part II. The unexpexted fortune of the daughters of exiled King Miguel I of Portugal by Datiu Salvia Ocaña. The second part covers the Infantas María José and Adelgundes, and I suppose the last two daughters will be covered in the third and last part of this article. I learn so much new from reading this article series and look forward to the last chapter, in which the notes will also be included.

President Franklin D. Roosevelt made friends with many royals, including Crown Princess Märtha of Norway. Edward W. Hanson has, however, chosen another subject, the president's meetings and correspondence with Grand Duchess Charlotte of Luxembourg in the article "Dear Lottie". The Grand Ducal Famkily of Luxembourg and President Roosevelt.

Michael L. Nash then gives a nice portrait of The Duke of Sussex and his wives - Prince Augustus Frederick, one of eight sons of King George III and Queen Charlotte.

I have from time to time discussed how «little-known» the royals treated in the article series Little-Known Royals really are. It will of course depend much on how knowledgable the readers are. The average subscriber to Royalty Digest Quarterly certainly know a thing or two about royal history. But I would say that Princess Eudoxia of Bulgaria fits the bill. She certainly is not among the best-known royals, to turn it around! Coryne Hall has given the readers more insight in the subject. I wonder, however, if one had mastered the Bulgarian language and had got access to Bulgarian archives – and German archives following her exile – if one would have found enough material to write a book about her? Are any Bulgarian historians these days interested in the history of the former royal family? Yes, there are books on the subject in English, French and surely also German, but I am doubt that most of the authors of foreign-language biographies etc. on the subject have had access to Bulgarian primary sources and the ability to read Bulgarian.

And finally, but not least, The World Wide Web of Royalty, which brings genealogical news of the Imperial, Royal and Princely houses of Europe. This time we get news from and about Hesse, Norway, Spain and Sweden.

If you are not a subscriber yet, get your act together! You will not regret it! Information on Royalty Digest Quarterly can be found at its editor's website Royalbooks.se. See earlier presentation of RDQ here. See also its Facebook page.
Posted by Dag T. Hoelseth at 20:00 No comments: