UK: Duke and Duchess of Sussex to step back as senior members of the Royal Family


“After many months of reflection and internal discussions, we have chosen to make a transition this year in starting to carve out a progressive new role within this institution. We intend to step back as ‘senior’ members of the Royal Family, and work to become financially independent, while continuing to fully support Her Majesty The Queen. It is with your encouragement, particularly over the last few years, that we feel prepared to make this adjustment. We now plan to balance our time between the United Kingdom and North America, continuing to honour our duty to The Queen, the Commonwealth, and our patronages. This geographic balance will enable us to raise our son with an appreciation for the royal tradition into which he was born, while also providing our family with the space to focus on the next chapter, including the launch of our new charitable entity. We look forward to sharing the full details of this exciting next step in due course, as we continue to collaborate with Her Majesty The Queen, The Prince of Wales, The Duke of Cambridge, and all relevant parties. Until then, please accept our deepest thanks for your continued support.”

Their Royal Highnesses, The Duke and Duchess of Sussex

The statement comes after the couple had taken some time off in the fall of 2019. I feel both a bit surprised and a bit sad following the news. I personally feel they are a great asset to «the Firm». The couple's relationship with the public started so well, and they are in my opinion only partly to blame for the the developments and downfall in 2019. The Duchess especially has not been treated fairly by the press or in the social media.

Obviously it is too easy to say much at present about what the new role will actually mean. The couple will still make engagements on behalf of the Queen. But the statement becomes more clouded following the press release from the Royal Communications later tonight: 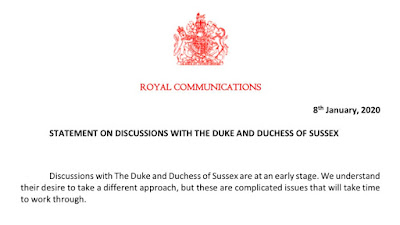 Stateement on discussions with the Duke and Duchess of Sussex

Discussions with The Duke and Duchess of Sussex are at an early stage. We understand their desire to take a different approach, but these are complicated issues that will take time to work through.

One easily get the impression that the couple had not consulted their family, or at least that the discussions were not completed, before the statement was released, and that the statement was thus premature. The couple writes, however, that «We look forward to sharing the full details of this exciting next step in due course, as we continue to collaborate with Her Majesty The Queen, The Prince of Wales, The Duke of Cambridge, and all relevant parties.» [The italics are mine.] Either way it is of course easy to jump to conclusions, and one doesn't have to spend much time on Twitter to know that people are going into a frenzy over the news. It is perhaps a wise idea to step back for a while and wait for more details. In the end the «different approach» might bring positive changes for everyone involved. Time will show.
Posted by Dag T. Hoelseth at 22:37