The Sultan of Oman has died, Longest reigns website updated 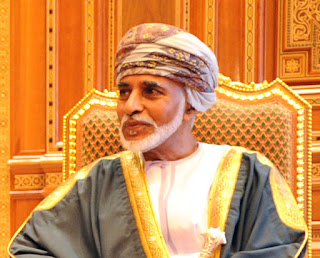 The Sultan of Oman, Qaboos bin Said bin Taimur al-Muazzam, died late on 10 January 2020, 79 years old, after having suffered from cancer for some time. Sultan Qaboos came to power in a bloodless coup in 1970 when his father was deposed with the assistance of the United Kingdom.

Qaboos was born at the Al-Husn Palace in Salalah on 18 November 1940 as the only son of Sultan Said bin Taimur al-Muazzam, by his second wife, Shaikha Miyzun bint Ahmad al-Qahtani al-Maashani. He was educated among others at the Royal Military Academy Sandhurst and briefly served in the British army before returning to Oman in 1966. He ruled as an absolute monarch, and he served as both head of state as well as prime minister, supreme commander of the armed forces, minister of defence, minister of finance and minister of foreign affairs. Under his nearly 50 year long reign the country was modernized and the living standards raised, with a lot of help of oil money. He was said to be a stabilizing force in region. In 1996 the Basic Statute of the State of Oman was promulgated.

The late sultan was briefly married from 1976 to 1979 to Sayyida Nawal bint Tariq Al-Said. As the marriage was childless, the question of succession was left to be decided by the Royal Family Council. Article 5 of the Basic Statute says that «The system of governance is Sultani [i.e. Royal], hereditary in the male descendants of Sayyid Turki bin Said bin Sultan, provided that whomever is to be chosen from amongst them as successor shall be a Muslim, mature, rational and the legitimate son of Omani Muslim parents.» The following article said that «The Royal Family Council shall, within three days of the throne falling vacant, determine the successor to the throne. If the Royal Family Council does not agree on a choice of a Sultan for the Country, the Defence Council together with the Chairman of Majlis Al Dawla Dawla [State Council], the Chairman of Majlis Al Shura Shura [Shura Council], and the Chairman of the Supreme Court along with two of his most senior deputies, shall instate the person designated by His Majesty the Sultan in his letter to the Royal Family Council».

Early on 11 January 2020 the Royal Family Council decided to open the sealed envelope in which Sultan Qaboos had left his choice, instead of entering proceedings to elect the successor in accordance with Article 6. The opening of the envelope was broadcast on Omani TV. Qaboos' designated heir was his first cousin Sayyid Haitham bin Tariq bin Taimur al-Muazzam, who has served as Minister of Heritage and Culture for 18 years. Soon after the election the new Sultan took the oath in accordance with the Basic Statute Article 7. Sultan Haitham, who is born in 1954 and has been educated at Oxford, said in a TV speech that he «pledged to continue his predecessor's policies of friendly relations with all nations while further developing the country». Sultan Haitham is married and has four children.

The funeral of Sultan Qaboos took place soon after the installation of the new Sultan. Qaboos was laid to rest at the Royal Cemetery  (Times of Oman says the cemetery is in Baushar, while The Oman Observer writes Ghala). The funeral was attended by Sultan Haitham, other members of the royal family as well as military leaders, members of the State Council and members of the Shura Council.

Due to the death of Sultan Qaboos, who at the time was no. 3 on the list of longest reigns among the current monarchs, my website has been updated. The new sultan has naturally been placed on the bottom, while Queen Margrethe II of Denmark has taken over the no. 3 spot.

(I note that while most sources use Al Said as the house name of the royal family of Oman, Royal Ark write al-Muazzam. In this blog article I have followed Royal Ark, but I might not be consistent about it in the future. I am indepted to Christopher Buyers' Royal Ark for information on the Omani royal family.)

Postscript 12 January 2020: Concerning the location of the royal cemetery, follow the link to the Google map. The royal cemetery seems to be in the Ghala village, but not far from Bawshar/Bawshar Heights. Another interesting aspect is of course the transcription of Arabic into the Latin alphabet. I have seen both Bausher and Baushar as well as Ghallah. For whatever it is worth, the English version of Wikipedia uses Ghallah and Bawshar.