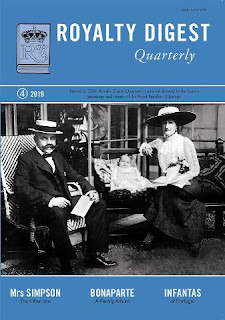 I am not completely done with 2019 yet, because I have left to make a few comments on the latest issue of Royalty Digest Quarterly (no. 4, 2019). The magazine was waiting for me when I returned to Oslo on Boxing Day (that is 26 December for those who don't know the expression), so it must have arrived on either the 23rd or 24th of December while I was away). I would normally have written this blog article earlier this month, but January has been rather hectic with many royal events to comment on.

Ted Rosvall is not happy about the Swedish king's decision to take away the style Royal Highness for the children of Prince Carl Philip and Princess Sofia and of Princess Madeleine and Chris O'Neill, we learn when we read his Editor's Corner. Rosvall says that the title change is a breach of tradition and also finds it unneccessary. His main objection seems to be that the title changes are «retroactive or have retroactive effects» which are «contrary to all legal principles». Yes, I can see that objection, but I have argued earlier that the changes were bound to happen one day, and of course it would have been better if King Carl Gustaf had ruled out titles for his younger children's children before they were born. Constitutionally speaking it is much easier to give a title or another privilege than to take it away.

What about the front page? The photo shows Prince Victor Napoléon Bonaparte, his wife Princess Clémentine Bonaparte, née Princess of Belgium and their daughter Princess Marie Clothilde Bonaparte. The photo is the hint we need to know the topic of this issue's A Family Album. The magazine's historical consultant, Charlotte Zeepvat, is as always responsible for the introduction to the Bonapartes. In addition we get lots of photos - 80 portraits as well as two photos of  palaces and one of  St. Michael's Abbey in Farnborough, the last resting place of Emperor Napoléon III. 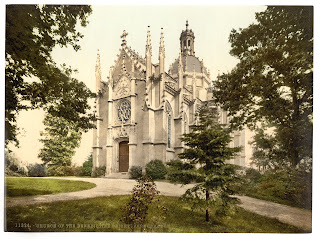 The opening article, The Other Mrs. Simpson, is provided by Marlene A. Eilers Koenig. She tells the story of the American divorcee Romaine Simpson, née Pierce (1923–1975) and her marriage to David Mountbatten, 3rd Marquess of Milford Haven (1919–1970), a first cousin of Prince Philip, Duke of Edinburgh. They married in 1950 and divorced four years later.

The next article starts with the quote «Geneva is my favourite place – I am safe there among cosmopolitians». Empress Elizabeth was tragically enough very wrong about her own safety while in Geneva. Elizabeth Jane Timms has written the article Empress Elizabeth if Austria and Geneva. The Visit of 1898, which ends with her assassination.

Then it is Douglas Scott Brookes to continue his series of excerpts from the memoirs of Prince Philipp zu Eulenberg – Two Emperors and One King on the Waters.

Datiu Salvia Ocaña has made contributions to Royalty Digest Quarterly before, and now he has returned with the first part of The Six Stunning Infantas. The unexpexcted fortune of the daughters of exiled King Miguel I of Portugal. King Miguel also had a seventh daughter (actually his first), Maria da Assunçao de Bragança (1831–1887), who obviously will not get her story told in this series. But I like the idea of a presentation of the six infantas and look forward to reading the second part.

Another set of articles which returns regularly is Little-Known Royals, and in this issue Coryne Hall presents Prince Gustav of Denmark (1887–1944), the youngest son of King Frederik VIII and Queen Louise. I agree that Prince Gustav fits the bill, not many people today would know who he was or could tell much about him. Those of us who covers Europan royal history would know, but we are hardly representative.

Finally the readers are treated with genealogical news in the column The World Wide Web of Royalty. This time we get news from France (Bonaparte), Baden, Prussia, Two Sicilies and Württemberg.

Lots to read this time as well. If you are not a subscriber yet, I highly recommend you to join up! Information on Royalty Digest Quarterly can be found at its editor's website Royalbooks.se. See earlier presentation of RDQ here. See also its Facebook page.
Posted by Dag T. Hoelseth at 20:10