More on Meghan Markle's ancestry and other genealogical connections

Since then several articles about Meghan Markle's ancestry have appeared at Vita Brevis:
I am sure there will be more articles – and maybe also a book? – covering Meghan Markle's ancestry and other genealogical connections as we get closer to the wedding. The engagement of Prince Henry («Harry») of Wales, youngest son of the Prince of Wales and the late Diana, Princess of Wales, and the American-born actress Meghan Markle, was announced on 27 November 2017. The wedding will take place at St. George's Chapel at Windsor on 19 May 2018, Kensington Palace announced on 15 December. Six days later three official photographs to mark their engagement were released. The photos can be viewed here, here as well as here!
Posted by Dag T. Hoelseth at 23:45 No comments: 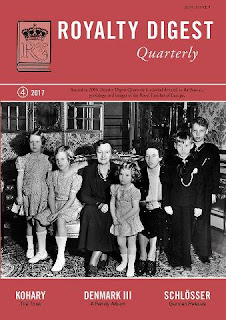 The fourth and last issue of Royalty Digest Quarterly this year arrived just in time for Christmas, and I had the pleasure of reading it on the train on my way back to Oslo last night. There is nothing like having five hours for yourself on the train where you can do nothing but to read and relax ...

While the editorial is dedicated to Queen Elizabeth II and Prince Philip of the United Kingdom, who celebrated their platinum wedding earlier this year, the front page is dedicated to Denmark and Queen Alexandrine, here sitting together with her grandchildren (from left to right)  Princesses Benedikte, Margrethe, Anne-Marie and Elizabeth and Princes Christian and Ingolf. The cover photo tells that inside the magazine the readers are treated with the third and last part of Charlotte Zeepwat's The Royal House of Denmark – A Family Album. Besides the introduction the article offers as many as 92 illustrations as well as two pages with genealogical tables. And if this is not enough, there is yet another Danish-connected article further back in the issue, as Princess Thyra (1880–1945), the younger sister of King Christian X of Denmark and King Haakon VII of Norway, appears in the series Little-Known Royals, with Coryne Hall as the author.

My favourite article of this issue, however, is written by Joseph van Loon and Oliver Defrance and titled The Last Kohary. The life of  Prince Phillipp Josias of Saxe-Coburg and Gotha. I learnt a lot about the Coburg-Kohary Trust and the prince in particular. More of this, please!

The documents the late John Wimbles collected from the Romanian National Archives and other sources seem to have no end, fortunately, and in the latest issue of RDQ the readers can enjoy the 6th part of the series Half a Century of Royal Letters; 1899–1947. 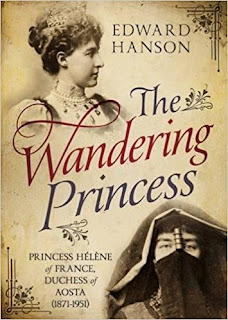 After the German palaces, Charlotte Zeepvat returns with her second article, this time a review of Edward Hansons book The Wandering Princess. Princess Hélène of France, Duchess of Aosta (1871–1951), Stroud: Fonthill Media, 2017. ISBN 978-1781555927.

In the final column The World Wide Web of Royalty, the readers can find genealogical news from the Imperial, Royal and/or Princely houses of Bourbon-Orléans, Brazil, Erbach-Fürstenau, Hannover, Leiningen/Prussia, Liechtenstein, Romania and Saxe-Coburg and Gotha. Concerning Romania, we learn that the editior will return with the obituary of King Michael in the next issue of Royalty Digest Quarterly. Trond Norén Isaksen has also written an obituary which was printed in the January 2018 issue of Majesty, which now should be available both in print and in electronic form.

Information on Royalty Digest Quarterly can be found at its editor's website Royalbooks.se. See earlier presentation of RDQ here. See also its Facebook page.
Posted by Dag T. Hoelseth at 23:01 No comments:

This December month has been rather busy due to Christmas preparations and work load, and I have not been able to write about the various events as I had wanted to. Here is a summary of the events I wish to write about.

Updated on Thursday 28 December 2017 at 07.50 (I had for some reason forgotten to write King Vittorio Emanuele's numeral!).
Posted by Dag T. Hoelseth at 00:16 No comments: