Sweden and Spain: A new princess, a new prince and a revoked title 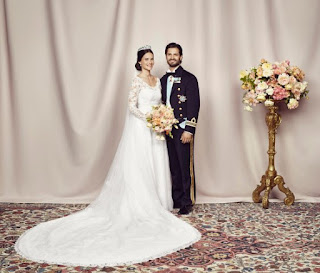 HRH Prince Carl Philip and HRH Princess Sofia. Photo: ©Mattias Edwall, Kungahuset.se.
I haven't been able to update my blog lately, with the exception of the Ferner article of Tuesday this week, so I thought I should summarize the events of the last few days.

1. Sweden got a new princess on Saturday 13 June 2015 when Prince Carl Philip, b. 1979, only son of King Carl Gustaf and Queen Silvia, married Sofia Hellqvist, b. 1984, the second daughter of Erik Hellqvist and Marie Hellqvist, née Rotman, at the Palace Church in Stockholm. The officiants at the wedding ceremony were Lars-Göran Lönnermark, head predicate and bishop emeritus, and Michael Bjerkhagen, pastor of the Royal Court Parish. Prince Carl Philip's best man was his school friend Jan-Åke Hansson.Sofia didn't have a maid-of-honor, while Princess Estelle, Tiara Larsson, Anaïs Sommerlath and Chloé Sommerlath were bridesmaids.

Because I attended a party on Saturday, I was not able to watch the televised wedding ceremony, but came home just in time to watch and listen to Prince Carl Philip's impressive speech at the gala dinner.

Last year I wrote an article about Princess Sofia's ancestry, based on among others research made by Ted Rosvall. In connection with the wedding I read that Princess Sofia also has Forest Finns (Finnish migrants who settled in forest areas in Sweden and Norway during the 16th and 17th centuries) among her ancestors (through her mother's line, I gather). However, no source was stated, and as I can't find where I read it, the reader should put a big question mark over it for the time being. Interestingly enough, also Prince Daniel has Forest Finn roots through his father. Anyway, it would be interesting to hear if more research has been done on Princess Sofia's ancestry since the above-mentioned article was posted in early July last year.

Time will show how Princess Sofia will be received by the Swedish people. Many find her background somewhat problematic, so the princess will have to work hard to impress. How the princess will communicate and connect with people is of course a key here. I am hardly the only one who has been impressed by how the couple, and especially Princess Sofia, has handled the press so far (at least from the engagement was announced and onward). The start of her "princess career" can only be described as promising.

2. Only two days after the wedding, the bridegroom's younger sister, Princess Madeleine, and her husband, Chris O'Neill, became parents for the second time. A boy was born at Danderyd Hospital in Danderyd municipality (Stockholm County) on 15 June 2015 at 1.45 p.m. The little prince weighed 3,08 kg at birth and was 49 cm long. Danderyd Hosoital is, by the way, also where Princess Sofia was born in 1984.

In the traditional Council of State held at Stockholm Palace on 17 June 2015, the names and titles of the little boy, currently 6th in line of succession to the Swedish throne, were announced: HRH Prince Nicolas Paul Gustaf, Duke of Ångermanland. His name in daily use will be Nicolas. Considering the fact that Princess Madeleine and Chris O'Neill had chosen Leonore as the call name for their firstborn child, a name not based on Swedish royal traditions, I wasn't surprised that the parents followed up with the name Nicolas for the second one. They could have landed on the more Swedish-sounding name Niklas, but seems to have wanted a more "international" name. Even spelt the French way. Well, the Bernadotte dynasty is after all French of origin. However, one can find several examples of Nicolas in various forms (Nicholas, Nicolaus, Nikolaus, Nikolai etc.) throughout European royal history. Within the Bernadotte family one can point at the former Prince Lennart (Gustaf Lennart Nicolaus Paul) (1909-2004), Prince August (Carl Nikolaus August) (1831-1873) and Prince Eugen (Eugen Napeleon Nicolaus).

Most people had guessed that Paul would be one of the names, as Chris O'Neill's father was named Paul Cesar O'Neill. And thankfully the third name Gustaf is a common name in Swedish royal history, and is of course the second name of King Carl XVI Gustaf. All in all, I am not too disappointed with the names (my opinion is of course irrelevant, but when has that ever stopped me from commenting), although I as usual would have preferred a more traditional Swedish royal name as call name.

3. On Thursday 11 June 2015 in form of a royal decree, published in the Official Gazzette (BOE) the day after, King Felipe of Spain decided to strip his sister, Infanta Cristina of her title Duchess of Palma de Mallorca, which she had received by her father, the former King Juan Carlos, in connection with her wedding in 1997 to Iñaki Urdangarin Liebert. The reason behind the decision to revoke the title is of course the tax evasion charges against the couple, a scandal that has seriously embarrassed the monarchy, to say the least. Cristina remains an Infanta of Spain, so the real motivation behind the decision might be to stop her husband, most likely "the main crook", from using his (courtesy) title. Although the scandal is serious enough regardless of the outcome of the trial (no date has yet been set), I still find the timing of the decision somewhat unmusical.
Posted by Dag T. Hoelseth at 22:09 1 comment: 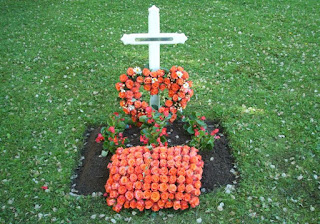 Johan Martin Ferner, the husband of Princess Astrid, died on 24 January 2015, 87 years old. The funeral service took place at Holmenkollen Chapel in Oslo on 2 February. According to the website of Gravferdsetaten i Oslo (the Cemetery Administration in Oslo), the urn was interred at Ris Cemetery in Oslo on Monday 15 June 2015. The urn grave has been leased together with 3 other (now empty) urn graves.

As one can see from the photos, the headstone has not yet been put up, so I will have to pay the cemetery another visit later this year to take new photos.

The urn grave can be found at section 20 close to the church. A map of the cemetery can be viewed here. 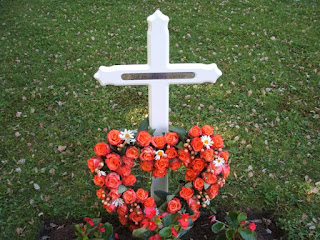 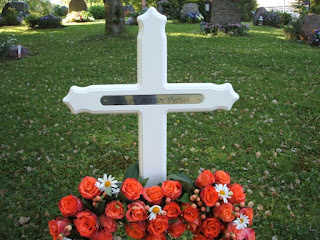 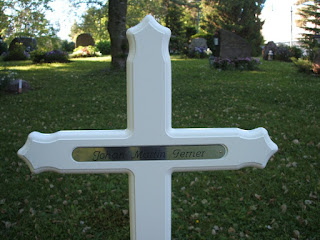 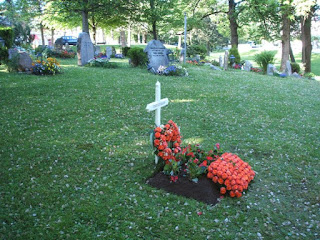 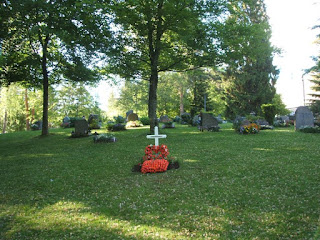 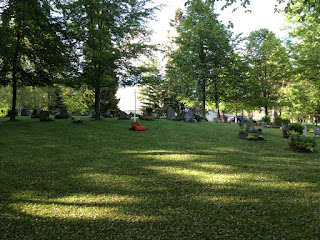 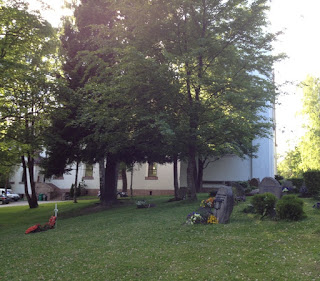 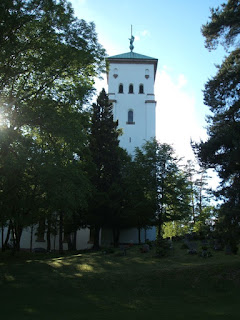 More photos of Ris Church and Cemetery can be viewed at Lokalhistoriewiki (here and here).
Posted by Dag T. Hoelseth at 22:03 No comments: 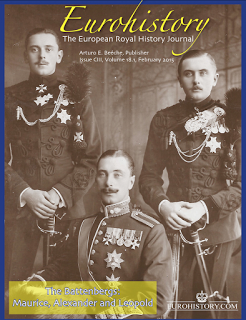 The latest issue of Eurohistory. The Europan Royal History Journal, issue CIII, Volume 18.1, February 2015 (yes, that is an handful!), arrived last month, but only now I have found the time to write a few comments. The main difference from last year's issues is that the binding (cover paper) of ERHJ is different (thicker). I have been looking for the right expression to describe it all night, but have to let it pass for now. Anyway, I agree that the new binding increases "the overall quality of the magazine", but I am not convinced that it is really worth the expanded printing time. The February 2015 arrived in the last part of May, while issue CIV (April 2015) first will be posted at the end of June. Still. the contents of the magazine is after all the most important thing.

The front cover of issue CIII (i.e. no. 103!) shows a photo of the Battenbergs - Prince Maurice, Prince Alexander and Prince Leopold, i.e. the sons of Prince Henry of Battenberg (1858–1896) and Princess Beatrice of the United Kingdom (1857-1944). The first article of this issue, written by Marlene Eilers Koenig, deals with Prince Maurice (1891-1914), who was killed during WW1. The article is certainly interesting and readable enough, but I can't fail to think that I have read many articles about him before. As I have also commented on Royalty Digest, I would like more variation in topics, because some times I feel the topics are just circulated. There are so many people from so many royal, princely and mediatized houses to write about!

Ilana D. Miller, author of The Four Graces. Queen Victoria's Hessian Granddaughters (2011) is the next one out with her article Who Is In the Photo ... Grand Duchess Anastasia Mikhailovna and Her Descendants. The photo which is the starting point for the article shows Duchess Cecilie of Mecklenburg-Schwerin, Crown Prince Wilhelm of Prussia, Dowager Grand Duchess Anastasia of Mecklenburg-Schwerin, Princess Alexandrine (later Queen) of Denmark and her sons, Prince Knud and Prince Frederik (later King Frederik IX). It is a good way of telling the story of family connections, but I wish Miller could have done some more research. The story with King Christian X of Denmark wearing the yellow star during WW2 just isn't true. See for instance Snopes.com or JTA.

Roberto Cortez Gonzáles has contributed with a long and very detailed article called An Interdisciplinary Discussion. The Nassaus of Luxembourg, which I really enjoyed. And it was only part one! Still, I wish the author had read more about the constitutional affairs of Nassau and Luxembourg, as the succession law that prevailed in Luxembourg until 1912 was not Salic, but semi-Salic.

Greg King is perhaps mostly known for his books and articles on the Romanovs, but he also writes about other royal topics, and this time he has given a presentation of the Palace of Queluz outside Lisbon, Portugal. I didn't find the time to visit Queluz when I visited Portugal last summer, and even though I am going to Portugal again this year, I will most likely miss it. But Portugal is certainly a country I would like to return to even a third or fourth time, and the said palace certainly looks interesting to visit.

Italy and it's royal history during WW1 has also been covered many times before, but it is my impression that Janet Ashton's article "Our ally has shamefully betrayed us". Italy Enters the Great War is based on a more varied and "new" selection of sources, and I look forward to reading part 2. The notes on the authors and their works could have been expanded on, though.

All in all, issue CIII provides plenty to read and ponder about, and I hope the next issue will arrive soon!

For earlier articles on the magazine, go here.