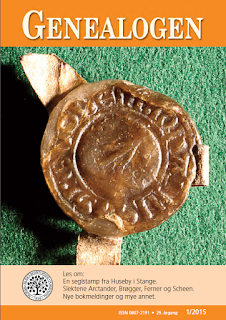 The latest issue of Genealogen, the newsletter of Norsk Slektshistorisk Forening (The Norwegian Genealogical Society), arrived around 3 weeks ago, so it is on time to write a few lines about its contents.

The cover photo shows a seal stamp found in 1998 at the farm Huseby in Stange in the county of Hedmark. The stamp is dated to the late 14th century, and the genealogist Frode Myrheim has written an article about the finding, the owner of the seal stamp, Goden Jonsson and how it could have ended up at Huseby.

There are many other rather interesting articles in the issue. Per Ole Sollie, Grete Singstad Paulsen and Lars Østensen have documented new information about the Arctander family, Torbjørn Pihl has written about the Brøgger family and the librarian Sølvi Løchen has written about genealogical sources and records at the NTNU Gunnerius Library in Trondheim. Elaine Hasleton has contributed with an obituary of the Norwegian-American genealogist Priscilla (Sorknes) Grefsrud (1932-2014), while Are S. Gustavsen has written about the late historian and genealogist Gunnar Christie Wasberg (1923-2015).

In 2012 the 100th anniversary of the Norwegian author and artist (among others) Thorbjørn Egner was marked all over the country. Even the Norwegian Genealogical Society contributed to the anniversary, as it published - on 12 December 2012, which would have been his 100th birthday - a draft of Egner's ancestry at Slektshistoriewiki, the Norwegian Genealogy Wiki. Earlier the same year Anders Heger published the biography Egner. En norsk dannelseshistorie. In the book Heger points to the fact that Egner was born on 12 December 1912 (12.12.12), and writes that Egner himself had been told by his parents that he was even born at 12 o'clock (noon). Heger more than suggests that Egner's parents had stretched the time a bit to underscore "the time of birth's magical symmetry". But as I have written about earlier, there are ways of finding out when people were born even 100 years ago. The midwife reported the birth to the Oslo (then Kristiania) Health Council, and the birth reports are stored in Oslo City Archives. So it was a rather easy task to visit the archives, find the birth report for Thorbjørn Egner and then write the article Sannhet eller myte om Thorbjørn Egner's fødselstidspunkt («Fact or myth about Thorbjørn Egner's time of birth»). And the answer? Yes! According to the midwife, Egner was born exactly at 12 o'clock. A copy of the birth report is published together with the article.


By the Ministry of Justice and Police's grant of 21 November 1927 Johan Martin Ferner and his siblings were given the right to adopt their father's given name Ferner as their surname. The grant published in Norsk Kundgjørelsestidende said:

Johan Martin Ferner himself commented on the grant in his 70th birthday interview in Aftenposten in 1997. So this is hardly news. Still, VG.no claimed in an article at the time of his death that he got the surname as an adult... Not very accurate when he was 4 months old! What is new, however, are the details about the grant, which I received from the National Archives. The act relating to personal names of 1923 allowed people to adopt a new surname, but surnames which were «not widespread» were protected. If you wanted such a surname, you needed the permission of those carrying it. At the time there was no national register, so it was the National Archives which got the task to find out if  there were others with the surname Ferner in Norway. The National Archives referred to Per Edvard Ferner's family, who lived at Høybråten in Aker (now part of Oslo). Ferner Jacobsen received permission from Per Edvard Ferner, b. 1866, and his family, and in this way Johan Martin Ferner and his siblings were granted permission to adopt Ferner as surname. It is interesting to mention, however, that according to the 1910 census there was also another Ferner family living in Trysil (Vilhelm Ferner, b. 1872), and as far as I can tell there are numerous descendants of that family living in Norway even today, but the National Archives never mentioned them. Was there a connection between Wilhelm and Per Edvard Ferner, by the way? I hope someone will follow up on that question some time in the future.

The documents about the Ferner name grant can be viewed here.

The news that the newborn daughter of the Duke and Duchess of Cambridge have been named Charlotte Elizabeth Diana (and to be known as HRH Princess Charlotte of Cambridge) seems to have been received well.

The name Charlotte has deep roots in British royal history, with Queen Charlotte (1744-1818), wife of King George III (1738-1820), and Princess Charlotte (1796-1817), who in 1816 married Prince Leopold of Saxe-Coburg-Saalfeld (who in 1831 became King of the Belgians), as two of many examples. Many has also pointed out that Charlotte is the feminine form of Charles, so even if one cannot know for certain the motivation behind the chosen names, it is easy to conclude that the baby has been named after her grandfather the Prince of Wales. In addition, the mother of the Duchess of Cambridge has the name Carole, which is one of several variations of Charlotte. And finally, the duchess' sister is named Philippa Charlotte.

The second name Elizabeth is also rather obvious, as the baby's great-grandmother Queen Elizabeth II wears that name. Not to mention the baby's great-great-grandmother Queen Elizabeth, the Queen Mother, née Bowes-Lyon (1900-2002). As mentioned in my previous article, the Duchess of Cambridge's mother has Elizabeth as her second given name. And finally Diana, named after the late Diana, Princess of Wales (1961-1997), mother of the Duke of Cambridge.

On Buckingham Palace's official Facebook page The British Monarchy, one could today read that "The Duke and Duchess of Cambridge have formally registered the birth of Princess Charlotte. The Duke of Cambridge signed the birth register at Kensington Palace this afternoon, witnessed by a Registrar from Westminster Register Office."
Posted by Dag T. Hoelseth at 20:54 No comments:

UK: Birth of a daughter to the Duke and Duchess of Cambridge

Finally the time has arrived! The Duke and Duchess of Cambridge became parents to a daughter early in the morning of 2 May 2015 at the Lindo Wing of the St. Mary's Hospital in London. Kensington Palace issued the following press statement:

Her Royal Highness The Duchess of Cambridge was safely delivered of a daughter at 8.34am.

The Duke of Cambridge was present for the birth.

The Queen, The Duke of Edinburgh, The Prince of Wales and The Duchess of Cornwall, Prince Harry and members of both families have been informed and are delighted with the news.

Her Royal Highness and her child are both doing well.

The newborn princess, who is fourth in line of succession to the British throne (afther the Prince of Wales, the Duke of Cambridge and Prince George of Cambridge), was introduced to the world later on the day when her parents left the hospital to take her home to Kensington Palace.

The princess is the fifth great grandchild of Queen Elizabeth II and Prince Philip, Duke of Edinburgh. Besides Prince George of Cambridge, Peter Phillips (son of Princess Anne, the Princess Royal) has two daughters - Savannah and Isla - while Peter's sister Zara has the daughter Mia.

The name of the princess is yet to be announced, but not surprisingly speculations have been going on for a while already. Last time around, when Prince George was born, almost everyone guessed the first of three names correctly. Some people had almost made it to a historical law that the prince would get four names, but he "only" got three. So, to be on the safe side, we can expect everythng from two to five names! As last time I would be surprised if the Duke and Duchess of Cambridge will not decide on a traditional royal name for the newborn girl. I am now first of all thinking about the name being in daily use, the call name. Elizabeth, Victoria, Alice and Charlotte are among the main suggestions, and they are all nice and traditional royal names. The Diana fans can of course not think of any name but Diana, but although Diana is a nice name, it will perhaps be too much to live up to and to be compared to for the little princess. Maybe the name should be saved for another generation, or only as one of the other given names.

Looking at William Addams Reitwiesner's book The Ancestry of Catherine Middleton (2011), we learn that the Duchess of Cambridge's grandparents were named Valerie and Dorothy, while her great-grandmothers had the names Olive Christiana, Constance, Edith Eliza and Elizabeth Mary. The mother of the duchess is named Carole Elizabeth, and the duchess herself Catherine Elizabeth. In other words, it is quite possible to give names that combine the traditions of both the British Royal Family and the Middleton family (and Goldsmith and Lupton etc.). Catherine's sister is named Philippa Charlotte, by the way ... Hopefully the Cambridges will not let us wait for too long for the names to be announced.