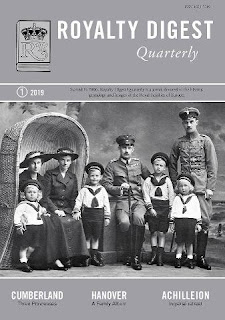 It is Hanover time! Or should I say Cumberland time? The latest issue of Royalty Digest Quarterly – no. 1, 2019 – has a cover photo of Ernst August of Hanover, Duke of Brunswick and his sister Alexandra, Grand Duchess of Mecklenburg-Schwerin with their partners and children. The photo was taken in 1917.

The cover photo hints at the fact that Hanover is the topic for this issue's Family Album by Charlotte Zeepvat. One observant reader commented recently in the Royalty Digest Quarterly's Facebook group that the very first issue of the magazine (no. 1, 2006) covered a Hanover album as well. Editor Ted Rosvall replied that «Yes, but that was long before we found the format and concept of the family albums. It only ahd [sic!] a few pages and very limited illustrations. This time we have done it properly.» Later in the same discussion another observant reader points out the same, and Rosvall refers to the 2006 album as «only an embryo, a tryout, to the Family Albums we have since produced». He continues: «Since Ms Zeepvat and I thought we did not handle that dynasty properly, we decided that it would be a good idea to redo it, this time with all the Brunswick background in the 17th and 18th centuries. The dynasties next to come are FRANCE (Bourbon/Orléans/Bonaparte), Two Sicilies, Schwarzburg-Sondershausen, Reuss-Schleiz, Spain and Sweden.»

And the redo is properly done indeed, with the traditional introduction to the family besides a large collection of photos of the members of the royal house and the palaces – 84 in all – as well as 6 pages with genealogical tables. Cleverly enough, the editor has also included the article The Cumberland Princesses by Marlene A. Eilers-Koenig.

In his Editor's Corner Ted Rosvall dwells on abdications in royal Europe prior to WW1 and lists examples from among others France, Spain and Austria. He could of course have mentioned abdications closer to his home country, such as King Christian Frederik's abdication of the Norwegian throne in 1814 and King Oscar II's of the same in 1905. The reason for Rosvall's list is to point to the second part of Bearn Bilker's The November 1918 Abdications, which is included in the present issue. I really enjoyed the first part published in no. 4, 2018, and Bilker delivers once again! This time we can read about the abdications in Saxe-Weimar, Hesse and by Rhine, Württemberg, Saxony, Mecklenburg and Waldeck-Pyrmont. Concerning the royal house of Saxony, Bilker correctly points out that the royal house is now extinct while one morganatic branch still remains. Oddly enough the editor has  included a photo of «Prince Alexander of Sachsen-Gessaphe» (Alexander de Afif), who claimed the headship following the death of his uncle, Maria Emanuel, Margrave of Meißen, in 2012. But otherwise de Afif is not mentioned at all. It is a trifle, though, but it might have been more fitting to include a photo of either Maria Emanuel or Albert.

In the last issue of 2018, Stefan Haderer was the author of the article A Fairytale Palace on Corfu. I: The Achilleion and Empress Elisabeth of Austria. This time Haderer returns with the second part, The Achilleion and German Emperor Wilhelm II. It is once again worth reading, and the information that the Achilleion and its park today is a museum certainly tempts my desire to visit Corfu one day.

Bearn Bilker has also made a second contribution this time – a review of  John van der Kiste's book Daughter of Prussia. Louise, Grand Duchess of Baden and her family (A&F Publications, South Brent Devon, UK, 2017, ISBN 978-1546960379). As of today the Kindle edition only costs USD 5,61, the paperback edition USD 10,09.

The editor has found space for two of his own (smaller) articles this time: Royal Monograms, based on and old album containing a large collection of among others royal and noble monograms and which he found in a second hand book store many years ago, and Little-Known Royals. Prince Erik of Sweden.

Finally the readers are treated with The World Wide Web of Royalty, the column covering genealogical news of the Imperial, royal, princely and/or mediatized houses of Europe, this time Austria, Castell-Rüdenhausen, France, Fürstenberg. Hohenzollern, Luxembourg and Spain (or France again, depending on your view on Luis Alfonso, Duke of Anjou's claims).

In other words, plenty of good articles to read this time as well!

UK: Scottish title for the Earl of Wessex

Buckingham Palace announced today, 10 March 2019, which is the 55th birthday of the Earl of the Wessex, the youngest child of Queen Elizabeth II, that he had received an additional title:


The Queen has been pleased to grant The Earl of Wessex the additional title of Earl of Forfar.

In the «Notes for Editors» section, the Earl's Scottish connections, such as being a patron of several Scottish charitable organisations etc., are pointed out. From the notes we also learn that:

Their Royal Highnesses will use the title The Earl and Countess of Forfar when in Scotland.

The Earldom of Forfar was created in 1661 and became extinct as a title in 1715. It was a subsidiary title to the Earl of Ormond and was a title held by the Douglas Family.

Forfar is the county town of Angus with a population of just over 14,000. It is the principal county town nearest to Glamis Castle, the seat of the Earls of Strathmore and Kinghorne. It was this family of which the late Queen Elizabeth The Queen Mother was part.

According to Michael Rhodes, who is behind the blog Peerage News, the Earl of Wessex is «a fifth cousin nine times removed of the previous holder of that peerage».

Just for the record, as there are so many misconceptions concerning the Earl of Wessex and the future title of Duke of Edinburgh, let me quote the press statement released at the day the Earl of Wessex married Sophie Rhys-Jones on 19 June 1997:


TITLE OF HRH THE PRINCE EDWARD

TITLE OF HRH THE PRINCE EDWARD The Queen has today been pleased to confer an Earldom on The Prince Edward. His titles will be Earl of Wessex and Viscount Severn. The Prince Edward thus becomes His Royal Highness The Earl of Wessex and Miss Sophie Rhys-Jones on marriage will become Her Royal Highness The Countess of Wessex. The Queen, The Duke of Edinburgh and The Prince of Wales have also agreed that The Prince Edward should be given the Dukedom of Edinburgh in due course, when the present title now held by Prince Philip eventually reverts to the Crown. The Queen has also decided, with the agreement of The Prince Edward and Miss Rhys-Jones, that any children they might have should not be given the style His or Her Royal Highness, but would have courtesy titles as sons or daughters of an Earl. To be released at 12 noon BST Saturday 19th June, 1999.


These guidelines are in place to help create a safe environment on all social media channels run by The Royal Family, Clarence House and Kensington Palace.

The aim of our social media channels is to create an environment where our community can engage safely in debate and is free to make comments, questions and suggestions.

In order to help create this safe environment we have set out some guidelines which apply to any engagement with us or other members of the community on any of our social media channels.

By engaging with our social media channels you agree to follow these guidelines.

Comments must not:
Breach of guidelines

We also reserve the right to send any comments we deem appropriate to law enforcement authorities for investigation as we feel necessary or is required by law.

The Telegraph explains the new formal guidelines with the «escalating abuse of the Duchesses of Cambridge and Sussex» in social media, and adds that «On Twitter and Instagram, the comments section has regularly descended into abuse of both Duchesses, with the Duchess of Sussex subjected to racist comments on top of the sexist and offensive words aimed at both her and the Duchess of Cambridge.»

The Telegraph also refers to the ongoing «war» between the «supporters» of the two duchesses. I have noted that many Boardhost forum regulars and others have also been dragged into this conflict. I am happy to stay out of it! Another matter is how this «Sussex vs. Cambridge war» goes against the very concept of monarchy. Many of the «warriors» seem to have a very shallow understanding of monarchy, monarchism and the roles of the royals.

I don't think the lack of formal guidelines would have stopped the British Royal Court from blocking or reporting offensive postings, but at least from now on the trolls and haters can not claim that they have not been warned!
Posted by Dag T. Hoelseth at 19:14 No comments:

Titles for the Emperor and Empress of Japan following abdication

Preparations are under way for the abdication of Emperor Akihito of Japan on 30 April 2019. One question that naturally has arised is what to call them afterwards.

Last week The Japan Times wrote, with the Imperial Household Agency as the stated source, that Emperor Akihito will be referred to as «Emperor emeritus», while his wife, Empress Michiko will use the title «Empress emerita». The Japanese equvialents will be jōkō (上皇) and jōkōgō (上皇后) respectively.

The similar practice in Europe varies. While the Dutch monarchs traditionally reverts to the title of prince or princess* following abdication, King Juan Carlos of Spain, King Albert of the Belgians and Grand Duke Jean of Luxembourg are still titled King or Grand Duke respectively, but they are of course not HM The King or HRH The Grand Duke anylonger. A parallell to Japan would be the Roman-Catholic Church, where Pope Benedixt XVI is referred to as «supreme pontiff emeritus».

* The three monarchs prior to King Willem-Alexander were all women – Queen Wilhelmina, Queen Juliana and Queen Beatrix respectively – and they all reverted to the title of Princess of the Netherlands following their abdication. I mention the title prince the just for «the sake of balance and equality» and because I expect that King Willem-Alexander will use the title of Prince again if he should decide to abdicate some time in the future. As far as I know, the first King of the Netherlands, Willem I, continued to use the title King following his abdication in 1840.
Posted by Dag T. Hoelseth at 18:46 No comments: