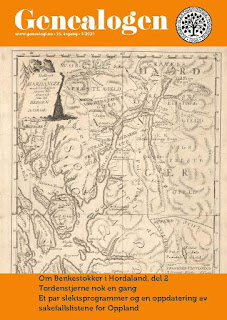 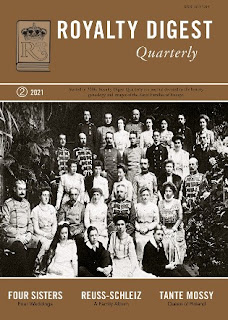 I received my copy of Royalty Digest Quarterly no. 2, 2021 back in July, but I left on vacation just after and then I was occupied with work and therefore have not had the time to write a few lines before now.
Prince Philip, Duke of Edinburgh, who died on 9 april this year, turns up in several articles in the present issue. In Ted Rosvall's Editor's Corner Philip's death is mentioned, before the editor moves on to the topic of royal centenarians. As you well know Prince Philip died just two months before he would have reached the grand age of 100, but Rosvall gives examples of other royals who did. Born royals, that is.
Then Marlene A. Eilers Koenig follows up with the article Four Sisters, Four Weddings, and yes, it is Prince Philip's sisters Margarita (1905–1981), Theodora (1906–1969), Princess Cecilé (1911–1937) and Sophie (1914–2001) she is focusing on. And of course, towards the end of the magazine, Prince Philip's death is listed in the column The World Wide Web of Royalty. Births, marriages, deaths and other events in the Royal Families of Europe. The column also covers the birth of Lilibet Diana Mountbatten-Windsor as well as news from Greece, Italy, Sweden and Württemberg.
The cover photo is from the silver wedding of Prince Heinrich XXVII Reuss j.L. (Reuss-Schleiz) (1858–1928) and his wife Elise (1864–1929) at Schloss Osterstein in Gera in 1909. This means that The House Reuss zu Schleiz (Younger Line) is the chosen topic for this issue's Family Album. This time, however, is the introduction not written by Charlotte Zeepvat as usual, but by the editor himself, Ted Rosvall, with contributions from Bearn Bilker. The album contains 50 illustrations this time (of various members as well as of  palaces besides a map, the coat of arms and various coins) and one page with genealogical tables.
Those who are interested in articles about royal graves will be delighted to know that Lucas Szkopinski has made the contribution The Bourbon Crypt at the Kostanjevica Monastery (Nova Gorica), while Ove Mogensen has returned with part IV of Tombs, Graves and Monuments in Thuringia, which deals with Saxe-Coburg and Gotha this time.
It is not very often that the magazine contains articles about non-European topics, but I appreciate it when it does. This time Stephen Bunford treats us with the article Our Hawaiian Friends. Royal connections between Britain and Hawaii. As the title suggests, it is a combination article, where Queen Victoria (1819–1901) is the main figure on the British side.
The historian and author Trond Norén Isaksen has written an insightful article titled Henri from Navarre. Prince Henrik of Denmark and the Kings Consort of Navarre. He has touched upon the subject of kings consort also earlier, and wrote a debate article on the subject in Aftenposten 10 August 2021.
If this was not enough, there are three more articles in the magazine! Charlotte Zeepvat was not behind the family album this time, but she has made great contribution with her article 'Tante Mossy'. Quen of Finland, which is about Landgravine Margarethe of Hesse-Kassel (1872–1954), née Princess of Prussia and a sister of Emperor Wilhelm II. The article title is formally correct, as Margarethe's husband, then Prince Friedrich Karl (1868–1940) was elected King of Finland by a rump parliament in 1918, but still somewhat misleading, as Friedrich Karl never accepted the offer, as he could predict the outcome of the war and that his relationship to Emperor Wilhelm would be a problem for the great powers. Friedrich Karl never set foot in Finland, but his son Wolfgang (1896-1989) did during WW2.
Not mentioned in the index, but there is a book review this time, written by Ted Rosvall. He comments on the sixth volume of Susan Symons' series of German castles and palaces, titled Schloss in Thuringia. I only own the three first volumes, so obviously I have get hold of the newer ones.
Little-known Royals? Coryne Hall this time presents Prince Nicholas of Romania (1903–1978), the fourth child of King Ferdinand of Romania (1865–1927) and his wife Queen Marie (1875–1938), née Princess of the United Kingdom of Great Britain and Ireland (and Princess of Saxe-Coburg and Gotha from 1893). Yes, I agree, Prince Nicholas certainly belongs to the group of little-known royals.
Information about Royalty Digest Quarterly can be found at its editor's website Royalbooks.se. See earlier presentations of RDQ here. See also its Facebook page.
Posted by Dag T. Hoelseth at 15:19 No comments:

The Office of Prince Hans-Adam II of Liechtenstein has announced that the funeral service for Princess Marie of Liechtenstein, who died last Saturday, 21 August 2021, 81 years old, will take place in St. Florin Cathedral in Vaduz on Saturday 28 August 2021 at 2 p.m.

The funeral service for HSH Princess Marie von und zu Liechtenstein on Saturday, 28 August at 2 p.m. is reserved for invited guests due to lack of space. However, the service will be broadcast on the national channel (TV) and www.landeskanal.li (via live stream).

Princess Marie's coffin will according to the newspaper Liechtensteiner Vaterland be transported from Grabs in Switzerland, where she died, to the chapel at Vaduz Castle on Wednesday. On Thursday 26 August the coffin will be taken to the St. Florin Cathedral, where the late princess will lie in state. The public will be able to file past the coffin on Thursday evening from 7 until 9 and on Friday from 9 a.m. until 9 p.m. The public also has the possibility to sign the condolence protocol.

Memorial services will also take place on Sunday 5 September 2021 and Sunday 3 October 2021 which the public can attend.

The princess will eventually be buried in the Princely Crypt (Die Fürstengruft) close to the cathedral. 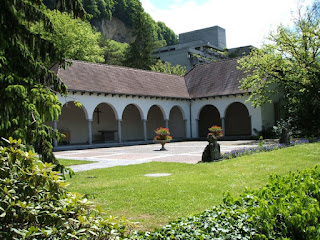 The Norwegian Royal Court announced today that Princess Ingrid Alexandra, daughter of Crown Prince Haakon and Crown Princess Mette-Marit, has tested positive for corona and is isolated at home at the Skaugum estate in Asker. The other members of the family have also been tested, but fortunately with negative results.

Crown Prince Haakon has cancelled his planned visit to UngInvest in Modum on Monday, and the Crown Prince couple have postponed the event on Wednesday at Skaugum where the 20th anniversary of the Crown Prince Couple's Fund was to be marked. The Crown Prince has also called off his presence at the disembarkation of the royal yacht Norge on Monday, which means that the king will act alone with the presence of Queen Sonja. 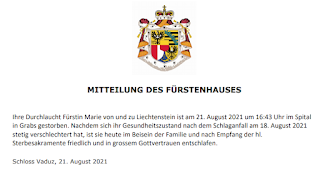 The Office of the Prince of Liechtenstein announced yesterday the death of Princess Marie of Liechtenstein, wife of Prince Hans-Adam II. The princess died at Grabs Hospital (Spital Grabs) in Switzerland on Saturday 21 August 2021 at 4.43 p.m.:

Announcement of the Princely House

Her Serene Highness Princess Marie von und zu Liechtenstein died on 21 August 2021 at 4:43 pm in the hospital in Grabs. After her health steadily deteriorated following a stroke on 18 August 2021, she passed away today in the presence of her family and after receiving the Holy Sacraments of the Last Supper, peacefully and with great trust in God.

In honour of the late princess church bells all over the principality rang at 8.15 Saturday night. The government of Liechtenstein declared today a national mourning of 7 days. Details of the funeral service will be disclosed in due time.

In 1945 following the end of WW2 Marie and her family had to escape from Czechoslovakia to Gemany. From 1946 to 1949 she attended primary school in Ering am Inn in Bavaria before continuing her education at the Lioba Sisters boarding school (Internat der Lioba Schwestern) in Kloster Wald in Württemberg and where she graduated from Realgymnasium.

Following a stay in England in 1957 to improve her English, she studied 3 years at the Akademie für Gebrauchsgraphik (Academy of Commecial art) at the University of Munich. After a short language stay in Paris she worked as a graphic designer/printmaker at a printing company before getting engaged to the then Hereditary Prince Hans-Adam in 1966. The couple was married in Vaduz on 30 July 1967. During her time as first lady she was for many years head of the Liechtenstein Red Cross. She also had a great interest in art and culture.

Princess Marie leaves behind her husband of 54 years, the Prince of Liechtenstein, four children – Hereditary Prince Alois, Prince Maximilian, Prince Constantin and Princess Tatjana – and 15 grandchildren. Her grandchildren Prince Joseph Wenzel (b. 1995), Marie-Caroline (b. 1996), Georg  (b. 1999) and Nikolaus (b. 2000) are through thjeir mother Hereditary Princess Sophie a descendant of the Norwegian family Vogt.

The christening of Prince Julian of Sweden, Duke of Halland, who was born on 26 March 2021 as the third son of Prince Carl Philip and Princess Sofia of Sweden, took place at Drottningholm Palace Church today, 14 August 2021.

The ceremony was officiated by Bishop and Chief Court Chaplain Johan Dalman and Court Chaplain and Rector of the Royal Court Parish Michael Bjerkhagen.

After the ceremony the guests attended a lunch at Drottningholm Palace.

Prince Julian's christening was not televised, a first for the grandchildren of King Carl Gustaf, but a summary will be broadcast on SVT on Sunday 15 August.