Today – 25 June 2020 – marks the 70th anniversary of the outbreak of the Korean War. In Oslo's main street Karl Johans gate the South Korean embassy is behind the exhibition of 24 banners thanking Norway for its contribution to the war, which mainly consisted of a field hospital called Norwegian Mobile Army Surgical Hospital (NORMASH) as part of the UN force. Norway also contributed with financial support, and established together with Denmark and Sweden the hospital National Medical Center.

The banner says «70th Anniversary of the Korean War Remembrance Solidarity Peace» and «Takk, Norge For Støtten under Koreakrigen 1950–53 Republikken Korea» («Thank you, Norway for the support during the Korean War 1950–53 The Republic of Korea»). 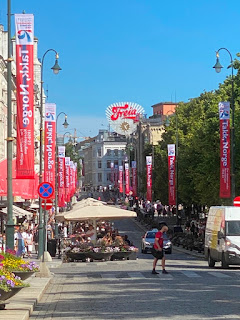 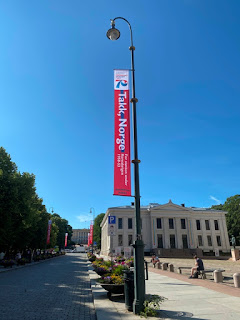 Karl Johans gate, Oslo, with the University of Oslo's Law Faculty Library in the background, and further back the Royal Palace. 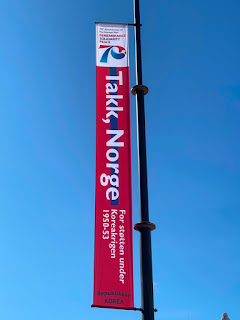 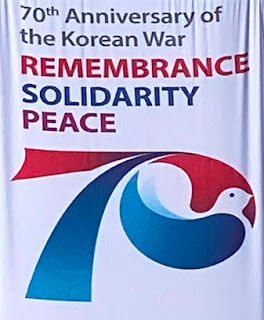 The South Korean embassy is currently hosting a photo contest were people are encouraged to send in their best photos of themselves alongside the banners. The best photos in the categories «best quality picture», «most creative picture», «pictures in special attire», «happiest or funniest picture» or «picture showing cooperation between Korean and Norway» will win a prize from the embassy. I guess I would have to make a better effort than the ones above in order to win ...

623 Norwegian men and women served in NORMASH over seven contingents. Only 2 of them working for the hospital were killed – one was shot, the other killed in a car accident. In addition two two seamen died, one by illness while the ship «Belocean» was in harbour in Pusan, the other by drowning while the ship was in harbour in Japan. But several Norwegan-born men served in the US army. One of them was Rolv Møll, who was born in Holum, Mandal in 1926 and settled in Brooklyn, New York in May 1950. He married the Norwegian-American Rosy Reiersen (Ryerson) (1924–1976) in December 1951, four months after he had joined the US army: He was sent to Korea in April 1952, serving in the 35th Infantry Regiment (25th Infantry (Tropic Lighting) Division) and was killed on the North Korean frontline in July the same year, 26 years old. He was among others awarded the Purple Heart posthumously. I wrote a piece about Rolv in Slektshistoriewiki, the Norwegian genealogy wiki, back in 2017. So whenever I think about the Korean War, I think about Rolv, whose life was taken far too early while in the service of his adopted country. 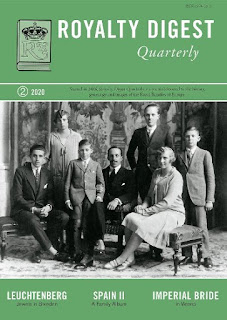 The latest issue of Royalty Digest Quarterly – no. 2, 2020 – has arrived, and as usual it provides plenty of quality reading. The cover is in green colour this time (what about yellow next, Mr. Editor!), and the photo is of King Alfonso XIII of Spain (1886–1941) together with his 6 surviving childen; Jaime, Maria Christina, Gonzalo, Alfonso, Beatriz and Juan. The latter was of course the father of King Juan Carlos and grandfather of the current king, Felipe VI.

Royal jewels is the topic of the first article of the present issue. The Leuchtenberg Jewels in Sweden is written by the Brazilian-born Claudia Thomé Witte, who appeared on Norwegian TV 12 days ago in a documentary on the royal jewels of Sweden. While royal jewels (tiaras etc.) are not exactly «my thing», there is no doubt that they represent important royal family history, and I admire experts like Ms. Witte who posess such a detailed knowledge. My daughter, who will turn 10 years old next month, took a great interest in the documentary, and even hushed me down when I dared to start talking. Who would have guessed that she would be interested in royal history ... It was a good article as well, although I miss a list of sources at the end.

Empress Elizabeth of Austria, Duchess in Bavaria (1837–1898), nicknamed «Sisi», still draws great interest, and there are no limits to how many different aspects of her life one can write about. In the article Imperial Bride in Vienna Elizabeth Jane Timm studies the wedding between Sisi and Emperor Franz Joseph in great deatail, including the whereabouts of her wedding dress.

The photo cover revals that the main article of this issue is the second part of The Royal House of Spain – A Family Album. A House Divided - the descendants of Carlos IV by Charlotte Zeepvat. The introduction takes the readers from King Fernando VII to King Felipe VI, and we are as usual treated by a large number of illustrations – 99 in all – the last is of King Felipe VI and his eldest daughter Leonor, Princess of Asturias. In addition there are four pages with genealogical tables.

The historian Datiu Salvia Ocaña, who resides in Barcelona, Spain, then completes the third and last part of his series The Six Stunning Infantas. The unexpexted fortune of the daughters of exiled King Miguel I of Portugal. The third part also includes notes, which also cover part I and II.

Who is the next one out in the series Little-Known Royals? Coryne Hall has this time written about Princess Maria of Italy (1914-2001), the youngest daughter of King Vittorio Emanuele III of Italy and his wife Queen Elena, née Princess of Montenegro. Princess Maria married in 1939 Prince Luigi (Louis) of Bourbon-Parma (1899–1967), the 22nd (!) child of Duke Roberto I and his 2nd wife Duchess Maria Antonia, née Princess of Portugal. They had four children. None of them made «dynastic marriages» and their children don't appear to have any titles according to An Online Gotha, but here I could be wrong. I am not talking about legal titles, of course, only titles by «a genealogical-historical definition».

And finally the column The World Wide Web of Royalty, bringing genealogical news from the European Imperial, Royal and Princely families. This time we get news from Bourbon-Parme, Greece (Brandram), Hesse, Luxembourg, Russia (Kulikovskaya), Stolberg-Roßla, Sweden (Nilert), Bourbon-Two Sicilies and Waldeck and Pyrmont.

Information about Royalty Digest Quarterly can be found at its editor's website Royalbooks.se. See earlier presentations of RDQ here. See also its Facebook page.
Posted by Dag T. Hoelseth at 21:25 No comments: 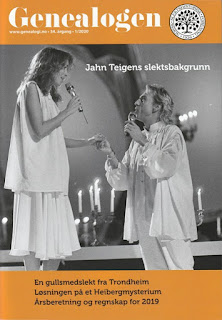 Short English summary: The article covers the latest issue of Genealogen, the bi-annual newsletter of the Norwegian Genealogical Society. I present the contents and comments on some of the articles and on events in the society.