Buckingham Palace announced today the engagement between Princess Eugenie of York, youngest daughter of HRH The Duke of York and Sarah, Duchess of York, and Jack Brooksbank. As has become the tradition recently, the engagement was first made public on Twitter, this time via the Duke of York's account: 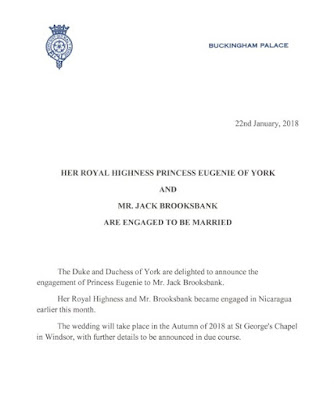 «The Duke and Duchess of York are delighted to announce the engagement of Princess Eugenie to Mr Jack Brooksbank.

Her Royal Highness and Mr Brooksbank became engaged in Nicaragua earlier this month.

The wedding will take place in the Autumn of 2018 at George's Chapel in Windsor, with further details to be announced in due course.»

This will be the second wedding in the British Royal Family this year, as Prince Harry will tie the knot with Meghan Markle on 19 May 2018. As Princess Eugenie is currently no. 8 in the line of succession to the British throne, she will not need to seek the consent from her grandmother Queen Elizabeth, cf. the Succession to the Crown Act 2013 Section 3.

According to the official website, Princess Eugenie, b. 23 March 1990, has got a Combined Honours BA in English Literature, History of Art and Politics at Newcastle University in September, 2009, graduating with a 2:1 degree in 2012, and is currently working «full time in the art world», or to be more precise, she is a director at the contemporary art gallery Hauser and Wirth in London.

Eugenie and Jack has been a couple for seven years. Jack, born in 1986, the eldest child of George Brooksbank and Nicola Brooksbank, née Newton, is working in the hospitality industry. He used to be the manager of the nightclub Mahiki in Mayfair, London, and according to the Daily Express, he is now working as «the Brand Ambassador of Casamigos Tequila, the award winning brand owned by George Clooney, Rande Gerber and Mike Meldman that recently sold to Diageo for $1Billion.»

The Duke of York expressed in a statement released on Twitter later today that «We are overjoyed at the news today that Eugenie and Jack have got engaged. Jack is an absolutely outstanding young man and Eugenie and he have got to know each other over a number of years, and I'm really thrilled for them.» His ex-wife Sarah, Duchess of York made several tweets, first writing just «Total joy!!» as well as posting a photo of the happy couple, then she followed up with «They float with laughter and love .. although a boat helps!» paired with yet another photo of the couple, before signing off with her third tweet, saying «I always say that the river flows well to it’s destiny because of the guidance of a solid rock», with another photo to follow. In another statement, Jack Brooksbank's parents George and Nicola Brooksbank said that they were «'completely over the moon' and 'very excited' for the couple. 'We could not be more delighted with the news of the engagement».

Following the engagement, three photos were released: (1), (2) and (3). The couple later appeared on BBC The One Show for a short talk about their engagement and the private blessings from the Queen.

As for Jack Brooksbank's ancestry, the genealogist and QVD author Marlene Koenig wrote on the subject in a blog article in 2016. The article reveals that Jack has several nobles among his ancestors, including his great-great grandfather the 2nd Earl of Leicester. Editor of the blog Peerage News, Michael Rhodes, wrote today on Twitter that «The groom to be is armigerous, & descends from the Coke Earls of Leicester, as does Eugenie, and that other royal consort the late Sir Angus Ogilvy.» His blog article on the engagement can be viewed here. 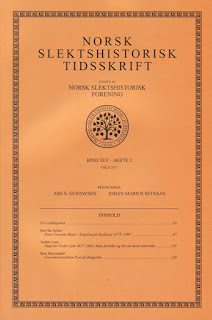 The latest issue of Norsk Slektshistorisk Tidsskrift (NST) (no. 2, vol. XLV) arrived in my mailbox earlier this week. NST, which celebrated its 90th anniversary in 2017, is one of two periodicals published by Norsk Slektshistorisk Forening, the Norwegian Genealogical Society. The other is named Genealogen.
Posted by Dag T. Hoelseth at 19:27 No comments:

In the summer of 2011 the three of us – my wife, my daughter and myself – made a round trip in Denmark and Northern Germany. On our way to (or from?) Kalø Castle in Rønde, Jylland (Jutland), we made a short stop at Bregnet Church. 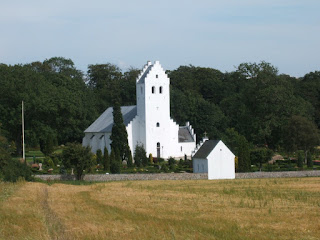 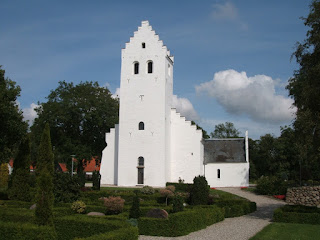 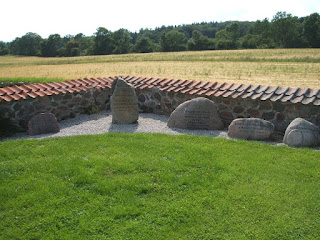 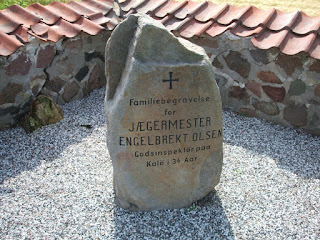 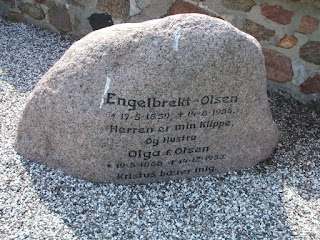 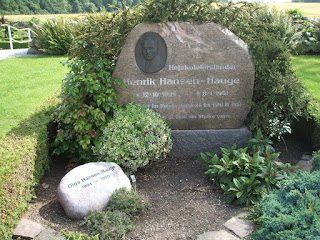 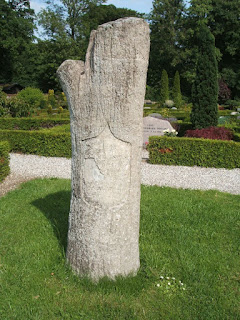 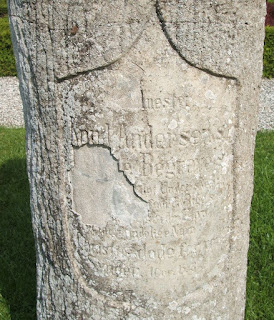 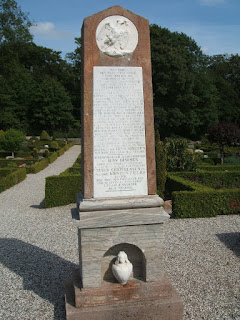 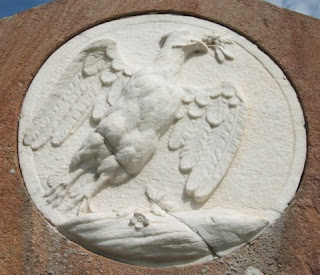 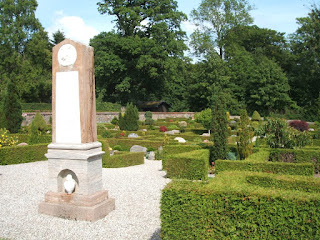 The church building is from the second half of the 15th century. It underwent a major restoration in 1872 and 2006. More information and photos can be found on Wikipedia (in Danish). I believe the church was closed, so we never got to see the interior.

I have mentioned earlier in my blog that I am one of the administrators of Slektshistoriewiki, the Norwegian genealogy wiki, which is administered by Norsk Slektshistorisk Forening (the Norwegian Genealogical Society). Besides administration work I have contributed with many articles over the years.

Here are some (but far from all) of the articles I written (both initiated and written most, if not all, of the updates) during 2017:

Genealogies
Biographies
Book presentations
Other
In addition I have updated many articles that I have initiated earlier. A survey of all my contributions can be viewed here.
Posted by Dag T. Hoelseth at 17:44 No comments: