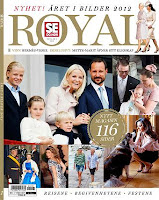 Earlier this month I wrote about Her og Nå's yearbook (booklet) Året med Kongefamilien 2012 ("The Year with the Royal Family 2012"). The publication has now got competition in Se og Hør/Aller Forlag's new royal magazine called Royal, which was launched on 19 November 2012.

The first issue has the subtitle Året i bilder 2012 ("The year in photos 2012") and it goes without saying that it first of all covers the main events of 2012. The main focus is naturally on the Norwegian royal family, but you will also find articles on other royals, including Crown Princess Mary of Denmark's 40th birthday celebrations, Prince Albert and Princess Charlène of Monaco's visit to Norway and the royal christening in Stockholm. Most main events are covered, such as Princess Astrid, Mrs. Ferner's 80th birthday, the Norwegian royal family's Easter vacation, state visits, 17th May celebration, the war hero Gunnar Sønsteby's funeral, King Harald and Queen Sonja's 75th birthday celebrations, Princess Ragnhild, Mrs. Lorentzen's death and funeral etc., etc. All in all 116 pages with lots of photos and short texts, to the price of NOK 69. In addition you get a feature article about Crown Princess Mette-Marit's wardrobe. In other words, more pages and cheaper than Her og Nå, but the quality is more or less the same.

Se og Hør's publisher Aller Forlag informs that the next issue of Royal is planned to be published in the spring of 2013.
Posted by Dag T. Hoelseth at 19:56 No comments:

The remains of King Zog brought home to Albania

The remains of King Zog of the Albanians, who died in exile in France in 1961, were exhumed at the Cimetière de Thiais in Paris on Wednesday 14 November 2012 and flown to Tirana, Albania the day after. The interment will take place at the royal mausoleum in Tirana on Saturday 17 November, with King Zog's grandson Prince Leka (II) and many Albanian officials present.

Norway: Medal of Merit scandal brought to a close

It has not been a good week for King Harald of Norway, currently abroad, and his court, following the headlines created by a controversial a Medal of Merit nomination.

According to the Royal Court Dr. Trond Ali Lindstad was nominated for the King’s Medal of Merit in silver "for his many years of dedicated effort to promote the integration of minorities as a medical doctor at Grønland and through his work at Urtehagen. The medal was awarded in recognition of this beneficial public service." The court had been warned about Lindstad's controversial statements that many view as anti-Semitic, but did not react until it became known that Oslo's Mayor Fabian Stang had refused to hand out the medal in a public ceremony planned to take place at the National Theatre on Tuesday this week. The ceremony was called off "for security reasons", and today it was announced that the medal was revoked with authority in the statutes' section 7.

Articles in Views and News of Norway:

The Royal Court's statement in full:

Dr Linstad was nominated for the King’s Medal of Merit for his many years of dedicated effort to promote the integration of minorities as a medical doctor at Grønland and through his work at Urtehagen. The medal was awarded in recognition of this beneficial public service.

The King’s Medal of Merit is a personal award bestowed on an individual for particularly meritorious service over an extended period of time. The service to be recognised must be an integral part of activities that also in a wider context are compatible with the overall purpose of the medal. “In this particular case, the Royal Court had not obtained an adequate overview on which to base such a comprehensive assessment. This regrettable oversight is the responsibility of myself and the Royal Court,” says Lord Chamberlain and Chancellor of the Council of the Order of Merit, Mr Åge Grutle.

Respect for freedom of speech must of course be one of the premises on which the review of medal candidates is based. We are normally extremely careful not to judge a nominee’s public statements. However, in a new review of this case, we have taken note of written statements by the candidate that can be interpreted as promoting the stigmatisation of the Jewish people as a whole and which seem to reflect stereotypical anti-Semitic conspiracy theories. We have also taken note of statements that may be interpreted as stigmatizing homosexuals. Dr Linstad has to us maintained that his statements should not be interpreted in this manner. Nevertheless, the Royal Court has concluded that Dr Linstad’s statements as they are presented and understood, are not compatible with the objective of the King’s Medal of Merit. Therefore, the conferral of the King’s Medal of Merit on Dr Trond Ali Linstad has been rescinded.

“We strongly regret having placed Dr Linstad in this situation,” says Mr Grutle.

For the record it is the Office of the Governor which gives a recommendation for nomination after a person has been suggested as a candidate to receive the medal, while the Council of the Order of Merit makes the decision. Formally it is the king who has the last word, but as far as I understand it is not often he is personally involved in the process. Itgoes without saying that the council has not done its job properly, which has caused a great deal of embarrassment to the king and the court. Obviously the court had no choice but to rescind the medal, and personally I am pleased about the decision. I expect, though, that the storm will soon calm down and that the king's position in the long run will not be weakened by it.
Posted by Dag T. Hoelseth at 21:18 No comments:

The coat of arms of the Hereditary Grand Duke of Luxembourg

The coat of arms of Hereditary Grand Duke Guillaume of Luxembourg was published by Grand Ducal decree 31 October 2012 in Mémorial, the Legal Gazette of Luxembourg (No. A 236, 9 November 2012).

The proposal to the new arms was given by the Heraldic State Commission (Commission héraldique de l’Etat) on 17 July 2012, with authority in act 23 June 1972 concerning national emblems.
Posted by Dag T. Hoelseth at 19:59 No comments:

The weekly magazine Her og Nå, published by Egmont Hjemmet Mortensen, is behind the recently released Året med Kongefamilien 2012 ("The Year with the Royal Family 2012"), which as the title suggests covers the main events of the Norwegian royal family in 2012. The price is NOK 89, ISBN 978-82-7227-097-0. It can be bought in most kiosks and supermarkets in Norway as well as from the publisher's webshop.

"Yearbook" might be somewhat misleading, as the publication is not a book, but a "special magazine" and has the same format and style as the ordinary weekly magazine. But for the sake of a suitable tag I will stick with "yearbook". After all, it deals with the royal family throughout the year.

This issue opens with the Christmas celebrations in 2011 and ends with the  Grand-Ducal wedding in Luxembourg in October 2012. We learn from the headline that Crown Princess Mette-Marit was the queen of the evening. Oh well, I am sure the equivalent publications in Sweden and Denmark will say the same about Crown Princess Victoria and Crown Princess Mary! Other articles include the opening of the exhibition The Royal Journey, the visit from the Prince of Wales in connection with Queen Elizabeth II's diamond jubilee, the public celebrations of King Harald and Queen Sonja's 75th birthdays, Their Majesties' state visit to Poland, the official county tours, the first anniversary of the 22 July terror acts, the London Olympic Games, Marius Borg Høiby's confirmation, Princess Ragnhild Mrs. Lorentzen's funeral and many private events as well. Lots and lots of photos (unfortunately some of them paparazzi) and short introductions (in Norwegian only) to each topic.

I am not sure if there will be any other yearbooks covering the Norwegian Royal Family this year. Last year Juritzen Forlag published Kongefamiliens årbok 2011 ("The Royal Family's Yearbook 2011"), but as of today I can't find any information at the publisher's website about a yearbook also in 2012.

Postscript 17 November 2012 at 23:10: If you don't get past the Norwegian order form, you can always send an e-mail to kundeservice [at] artisti.no.

Postscript 23 November 2012 at 11:00: It appears that the webshop doesn't post items to foreign addresses...