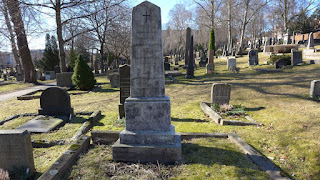 Geir Håkonsund, who was the author and artist Ari Behn's manager and who has served as the family's spokesperson following Behn's death, informed yesterday that it has been the family's wish that the urn will be interred at Our Saviour's Cemetery (Vår Frelsers gravlund) in Oslo. The family didn't want to reveal the date of interment.

I can well understand that Behn's family wishes to keep the date to themselves, especially if the family wants a private ceremony in connection with the interment. Following Behn's tragic death, the family has shown a remarkable openness, so their wish to keep something private should be respected. The disclosure of the place of interment for a former member of the royal family could be described to be in the public interest to some extent. Unless the urn will be interred in an unnamed grave – something I doubt will happen in this regard – the information will appear in the public cemetery register after the interment. Usually when people die during winter time in Norway, the remains, if cremated, will be interred after the frost has gone out of the ground. Even if the winter has been quite mild so far, I suppose there will be a waiting period before the interment takes place. We will know in due time.

Our Saviour's Cemetery is perhaps the most famous cemetery in Norway and is often described as the «Père Laichaise» of Norway, the place where all the famous people are buried. The cemetery includes Æreslunden, the honorary burial ground, which has many notable interments – for instance the artist Edvard Munch and the authors Henrik Ibsen and Bjørnstjerne Bjørnson. Outside the honorary burial section there are also many other graves of historical interest. Even an ancestor of Hereditary Princess Sophie of Liechtenstein is bured in the cemetery. In general Our Saviour's Cemetery was the place to be buried for the upper-class and bourgeois, and there are many grand tombstones to see there. But there are many graves with «less-known» people interred there too. A great aunt and uncle of my wife are buried in Our Saviour's Cemetery as well, mainly because they used to live nearby.

The cemetery was opened in 1808 and was closed to new burials in 1911, the honorary section excepted. After 1911 one could only be buried at the cemetery if the lease of a grave had expired. According to the cemetery website as well as the booklet Her hviler ... Kjente personer på kirkegårdene i Oslo sentrum (by Øyvind Haaland, 1999) the practice of reusing graves after the lease had expired was stopped between 1952 and 2014. I am not sure if this description is entirely accurate, as there were many people interred in «expired graves» in that period, including my wife's relatives. Anyway, nowadays the cemetery allows urn interments in graves which lease has expired.

According to the website the cemetery has more than 4500 tombstones which are considered to be worth preserving and which cannot be removed after the lease of the grave has expired. In order to keep the cemetery's historical appearance it is not allowed to set up headstones with modern design. But one can reuse a grave including the old headstone and get the old inscription replaced by a new one.*

Earlier in January I wrote that «it is quite possible that the urn will be interred at Lommedalen Cemetery in Bærum», given that he resided in Bærum at the time of his death and given that his daughters still live there. No information was disclosed about interment was disclosed at the time. I can, however, well understand the choice of Our Saviour's Cemetery in Oslo. Not only because of the cemetery's historical value, but also for practical reasons. It will among others be easier for Ari's family in the Moss area to visit the cemetery, which is close to downtown Oslo, than to travel to Lommedalen in Bærum.

My earlier blog articles about Our Saviour's Cemetery in Oslo can be found here. More articles will follow later.

* Postscript 15 January 2020: I have to make an additional remark here. According to the Cemetery Administration in Oslo's annual report 2018, when the lease of a grave at Our Saviour's Cemetery has expired and is being reused, the headstone will be taken from an expired lease at another cemetery in Oslo. According to an e-mail from the cemetery administration today, there is an ethical explanation for this – former lease holders should not be exposed to recognizing the headstone which is being used.

Postscript 25 April 2020: Due to the corona virus situation all urn interments where the bereaved wishes to have a ceremony have been postponed indefinitely. According to Se og Hør no. 17/2020, the cemetery administration has confirmed that Ari Behn's urn will be interred in section 20.