It has been intense days for everyone involved – members of the British royal family and court, the media and the royalty-watching community – since the Duke and Duchess of Sussex announced last week that they wished to «step back as senior members of the Royal Family».

Members of the royal family – the Queen, the Prince of Wales, the Duke of Cambridge and the Duke of Sussex – met on Monday this week to continue the discussions on finding solutions on how the more independent life for the Sussexes will look like. After the meeting the Royal Communications issued the following statement on behalf of Queen Elizabeth: 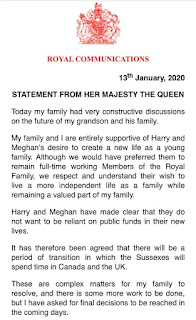 STATEMENT FROM HER MAJESTY THE QUEEN

Today my family had very constructive discussions on the future of my grandson and his family.

My family and I are entirely supportive of Harry and Meghan's desire to create a new life as a young family. Although we would have preferred them to remain full-time working Members of the Royal Family, we respect and understand their wish to live a more independent life as a family while remaining a valued part of my family.

Harry and Meghan have made clear that they do not want to be reliant on public funds in their new lives.

It has therefore been agreed that there will be a period of transition in which the Sussexes will spend time in Canada and the UK.

These are complex matters for my family to resolve, and there is some more work to be done, but I have asked for final decisions to be reached in the coming days.

I have waited a bit before commenting on the developments. It has been many other events to write about since «the independence statement» was released, and I also thought it was a good idea to wait for more details. There was no reason to get carried away. As so often every newspaper claim to have sources close to the couple and to the other family members, and too many people seem to accept their stories as facts, especially if they fit their own views, and even if some of the stories seems very far out.

The media coverage and the discussions in the social media have been very intense and heated, and the Sussexes have received a lot of criticism, especially the Duchess, who has been labelled as the main villain. It seems to have become an established fact that the Sussexes didn't respect the Queen's request that they waited with making their decision public. It certainly showed poor judgment and disrespect to the Queen and other members of the family if that was the case. There might have been good reasons for making the decision public prematurely, but I can well understand the criticism on this point. I acknowledge how delicate the situation is, but I still feel the reactions to their decision to step back as senior members are far out of proportions. Allegations of «betrayal» etc. are really uncalled for. I also find many critical comments, especially in the social media, to be very one-sided.

I think Crown Prince Haakon of Norway put it so well when he earlier this week commented on «the Sussex drama»: – I think that everyone should «breathe with their stomach». And surely the will find good solutions.

Yes, I am personally both sad and disappointed about their decision. I think the Duke of Sussex has a great way of interacting and communicating with the public, and the Duchess and the Sussexes as a joint couple have made more than a promising start, even if there have been a few bumps in the way. One could of course have wished they waited this out a bit and that they would have overcome the challenges eventually. They clearly see it differently. And here we come to the very core: It is their life. They cannot be forced to live a life they are not happy about. In the end nothing would come out good for either parties – the royal family, the Sussexes and public. Yes, they live privileged lives, but they pay a high price for it, and they have found it to be too high and have decided for a different path.

Clearly there are complex issues to solve, and there are still many unanswered questions – about money, titles (which shouldn't be commercialised) and what kind of role they will play in the British society and abroad. Hopefully good solutions will be found.

The biggest question in my opinion is how the current and future senior members of the royal family will play their roles and how they will meet all the expectations. Most people had expected that the Sussexes would assist the Queen and her successors at least until the Cambridge kids were old enough to make engagements on their own. The number of working royals will in the future be lower, not only for natural reasons, but also because of the alleged decision to slim it down actively. How is this going to play out? The reduced number has to mean that the royal family cannot meet all the expectations and demands as today. Some changes are unavoidable, and the royals have to find their own way just like previous generations. I just hope that my reservations and feelings of uincertainty will prove me wrong.

Finally: Some people have wondered if it is now the time for the York princesses – despite the decisions of the Way Ahead Group that they should not be working royals – «to step up» to fill the gaps. But why would they wish to give up their rather independent lives now after so many years on the sideline?
Posted by Dag T. Hoelseth at 00:32