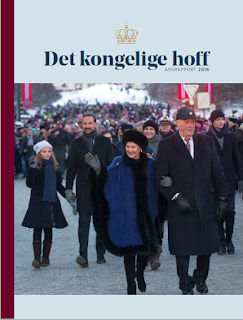 Last year I mentioned that the magazine Her og Nå had decided not to publish a yearbook about the events of the royal family like in previous years.  At the time of writing I hadn't come across any royal yearbooks by other publishers either. Later I found out  that Se og Hør had an inset in no. 50, 2016. It was only 24 pages long, though, and nothing compared to Her og Nå's Året rundt med Kongefamilien («The Year with the Royal Family») or the hardbacks titled Kongefamiliens årbok («The Royal Family's Yearbook») published in the late 1980s/early 1990s, besides the 2011 edition.

The 25th anniversary of the accession to the Norwegian throne of Their Majesties King Harald and Queen Sonja was the major focus of 2016. The celebration started with a large winter festival in the Palace Square on 17 January and concluded with a garden party hosted by the King and Queen in the Palace Park for 1 500 guests from throughout Norway. In June, the King and Queen carried out a silver jubilee tour along the coast from Tromsø to Kristiansand on the Royal Yacht, Norge.

In addition to the jubilee celebrations, the Royal Family has had an extensive official programme. Altogether, the members of the Royal Family took part in 740 official events in Norway and abroad. They have paid visits to 48 municipalities, all of Norway’s counties, Svalbard, and eleven different countries.

In the course of the busy summer weeks, more than 45 000 visitors attended the activities conducted under the auspices of “Åpent Slott” (cultural outreach activities).
Annual accounts

The accounts for the Civil List showed a surplus of NOK 6 628 814. Expenses in connection with the various jubilee celebrations are covered by previous appropriations.

The accounts for the staff of Their Royal Highnesses The Crown Prince and The Crown Princess showed a deficit of NOK 1 459 461. This deficit will be covered by previous appropriations.

The accounts for “Åpent Slott” showed a surplus of NOK 619 162. This surplus will be added to the equity capital.

The annual report and accounts of the Royal Court for 2016 were submitted today to the Presidium of the Storting, the Ministry of Local Government and Modernisation, and the Office of the Auditor General of Norway.

The annual reports from 2005 to 2016 are available at the official website. Not sure if the annual reports for 2002, 2003 and 2004 were ever published in an electronic format, but at least I have the paper editions.

As mentioned in the press release, King Harald celebrated 25 years on the throne last year, and the annual report tells about all the related activities, including the church service on 17 January 2016 in the Oslo Cathedral. We can also read that the official website Kongehuset.no had close to 1,6 million visitors during 2016, while the Facebook page received 939 500 likes and 30 500 comments. As many as 29 998 people toured the Royal Palace during the summer season, while 5 232 visited Oscarshall (up from 2 718 the year before).

As usual many orders and medals were awarded during 2016. The section for the recipients of the  Royal Norwegian Order of St. Olav lists 18 people, compared to 26 the previous year. HRH Crown Princess Mette-Marit was awarded the Grand Cross with chain, while Court Marshal Arne Omholt, the President of Poland, Andrzej Duda and the President of Italy, Sergio Mattarella, received the Grand Cross, and in addition the Chief of His Majesty The King’s Military Staff, Nils Petter Granholt, received the Knight's Cross, First Class, just to mention a few.

The Medal of St. Olav was awarded to two persons, John Foster Ellison and Perry J. Gulbrandsen. The former is the the Norwegian honorary general consul in Wellington, New Zealand. He also received the Order of St. Olav, Knight 1st Class, by the way. The latter is a retired jurist of Illinois, USA and is or was President of the Nordic Law Club. Obviously of Norwegian descent as well. Just to mention it, 5 people received the medal in 2015.

There were 90 recipients of the King's Medal of Merit during 2016, compared to 78 in 2015 and 138 in 2014. Among the recipients in 2016 was Sveiung Danielsen of Sandefjord. He received the medal for «his exceptional efforts of many years to keep and pass on important traditions of culture and craft». He served as a verger in Sandar Church in Sandefjord for many years as well. A well-deserved medal, I would say.

Never an anniversary without a medal, and King Harald V's Jubilee Medal 1991–2016 was founded on 17 January 2016. Recipients were members of the Royal Family, numerous people of authority (past & present), members of the Royal Court, the King's Military Staff, royal guards who served as batmen (orderly),  the Royalty Protection Unit and  the Norwegian Directorate of Public Construction and Property's employees at the Royal Palace. 366 people all in all, if I have got it right.

Finally a survey of my own articles on the subject in the past (no article in 2016, obviously):