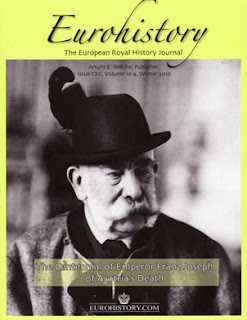 The fourth and last issue of volume 19 of Eurohistory. The European Royal History Journal arrived in my mailbox at the end of March.

Last year was the centennial of Emperor Franz Joseph of Austria's death, and in the article «Why Cecco Beppe Does Not Die». The death and  continuing afterlife of Franz Joseph, Janet Asthton draws a great picture of his death and how he has been viewed afterwards.

The next article, Alex Wernher. A  close friend of HRH Prince Philip, Duke of Edinburgh by Marlene Eilers-Koenig was also interesting to read, among others because she has focused on a lesser-known member of the royal circle. Alex (George Michael Alexaner Wernher (1918–1942)) was the son of Sir Harold Wernher (1893–1973) and Countess Anastasia «Zia» de Torby (1892–1977). Through his mother he was a descendant of Emperor Nicholas I of Russia, and one of his godparents was King George V of the United Kingdom, who was a friend of Alex' grandfather Grand Prince Michael of Russia (1861–1929).

We meet the Wernhers again in Ilana D. Miller's traditional Who is in the Photograph? article, this time titled A Wartime Wedding. The photograph in question is from the wedding of Countess Nadejda de Torby and Prince George of Battenberg in 1916 and shows Prince George of Battenberg, Princess Louise of Battenberg, Countess Nadejda de Torby, Countess Zia de Torby, Princess Xenia Georgievna of Russia and Princess Nina Georgievna of Russia. Miller then goes on with a presentation of the said persons. If you haven't guessed already, Nadejda was the aunt of Alex Wernher, who was killed during WW2. And if you are interested in reading more about the Wernhers and their royal connections, Raleigh Trevelyan wrote the boook Grand Dukes and Diamonds: The Wernhers of Luton Hoo in 1991 (Martin Secker & Warburg Ltd.; ISBN 9780436534041). Paperback and e-book editions were published by Faber & Faber in 2012.

But before Miller's contribution, the readers can enjoy two other articles in which members of the Russian Imperial family are involved: Greg King's The Mad King's Other Empress. Ludwig II and Maria Alexandrovna of Russia and Coryne Hall's St Petersburg's Winter Palace, 1903. The Last Costume Ball.

The readers are then treated with several book reviews (the first by Marlene Eilers-Koenig, the rest by Coryne Hall):
Finally, the Royal News column gives the latest genealogical events in the Imperial, Royal and/or Princely houses of France, Luxembourg, Oldenburg, Prussia, Russia and Schaumburg-Lippe.

For earlier articles on the magazine, please go here, while the ERHJ blog can be read here.