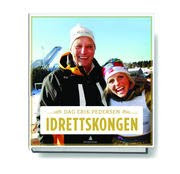 Dag Erik Pedersen's book Idrettskongen ("The Sports King") is to be launched in connection with King Harald V's 75th birthday on 21 February next year, Dagbladet.no revealed in the article Kongen håndplukket Dag Erik til bokprosjekt ("The king hand-picked Dag Erik for [the] book project") yesterday.

The book is meant to cover King Harald's commitment to and great interest in sports, both as an athlete, spectator and as a protector. The king is the Norwegian Olympic and Paralympic Committee and Confederation of Sports (NIF)'s protector and is still an active yachtsman. In 1987 King Harald and his crew won the World Championships with his one-tonne yacht, the Fram X, and in 2005 they won the European Championships with the Fram XV. The King remains an avid yachtsman, participating in national and international regattas each year, cf. his biography at Kongehuset.no.

The king has on several times been described by his wife as a "sportsidiot" ("mad on sports", "sports crazy"), so even if there might be some sports that he finds more interesting than others, his frequent attendance at sports events in Norway and abroad is certainly not because of duty. His knowledge about Norwegian and international sports is said to be impressive. - You can interview any Norwegian athlete, and everyone will tell you that the king was present at the greatest moment of their career, the author says to Dagbladet.no.

Dag Erik Pedersen works as a sports journalist for the Norwegian Broadcasting Corporation (NRK) and is a former professional cyclist. In 1999 he produced a TV documentary with the same title as the book, Idrettskongen. According to VG.no 10 December 2011, Pedersen asked the king if he would be interested in contributing to the book during the Olympic Winter Games in Torino in 2006. Dagbladet.no on the other hand claims that it was the king who wanted Pedersen to write the authorised book.

The book will be sold in the book stores as well as by the athletic clubs, which will get some of the profit.