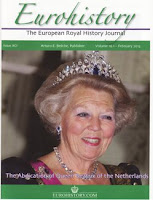 I received the latest issue of The European Royal History Journal (Issue XCI, Vo. 16.1, February 2013) at the Royalty Weekend in Ticehurst, East Sussex (separate blog article to be published later) earlier this month. The front page - in nice green colours (should perhaps have been orange!) shows Queen Beatrix of the Netherlands, who is to abdicate on 30 April 2013 in favour of her son, the Prince of Orange (Prince Willem-Alexander).

The latest issue provides many interesting articles. The first one out is the ERHJ regular contributor Ilana D. Miller, known among others for her book The Four Graces (2011). Her article is titled What's In a Photo. A Family Visit to the Court of Tsar Alexander III, and opens with the author's impression that the emperor doesn't look well... The photo was taken at The Cottage Palace in Alexandria Park in 1889, five years before he died. Besides the main photo of the article you may also enjoy 12 more photos of members and relatives of the imperial family.

The second article is written by QVD author Marlene Eilers-Koenig, who focuses on the marriage between Archduke Imre of Austria and Kathleen Walker. The wedding took place on 8 September 2012 in Washington, D.C. The article is illustrated by many photos of the guests taken outside the St. Mary Mother of God Church.

In the Royal Book Reviews section another ERHJ (and RDQ) regular contributor, Coryne Hall, covers the books The Last Days of Richard III and the Fate of his DNA (by John Ashdown Hill, The History Press, updated paperback edition, 2013) and Twilight of the Romanovs. A Photographic Odyssey Across Imperial Russia (by Phillipp Blom & Veronica Buckley, Thames & Hudson, 2013).

In connection with the forthcoming abdication of Queen Beatrix of the Netherlands, Arnout van Cruyningen has been given space to write about the Dutch inauguration ceremony, The "Inhuldiging". The Solemnization of the Dutch Monarch's Accession to the Throne. The author believes that the best English translation for the Dutch word "inhuldiging" ("Huldigung" in German) is "Ceremony of Homage".

Then Coryne Hall returns with her article Murder in Marseille - The Assassination of King Alexander of Yugoslavia. Its neighbour country Albania is also given attention in Lucas Szkopinski's article The Reburial of King Zog of the Albankians. Tirana, 17 November 2012. The reburial, which was also one of the topics at the Royalty Weekend, was attended among others by Grand Prince George of Russia, Prince Nikola of Montenegro and Radu Duda (Prince Radu of Romania).

Joe Spiteri (not the former Australian football (soccer) player, I presume!) then deliberates about among others changes to the usage of royal titles in his article What's in a Title, while the ERHJ editor and publisherArturo E. Beéche has written the obituary about Princess Margarita of Baden (1932-2013). Finally there is a Royal News section divided into First Section Almanach de Gotha and Mediatized Dynasties.

The publisher of The Europan Royal History Royal can be reached at erhj [at] eurohistory.com. The website Eurohistory.com could have been more updated, but on the other hand its blog is updated usually several times a week. The same thing can be said about its Facebook page.