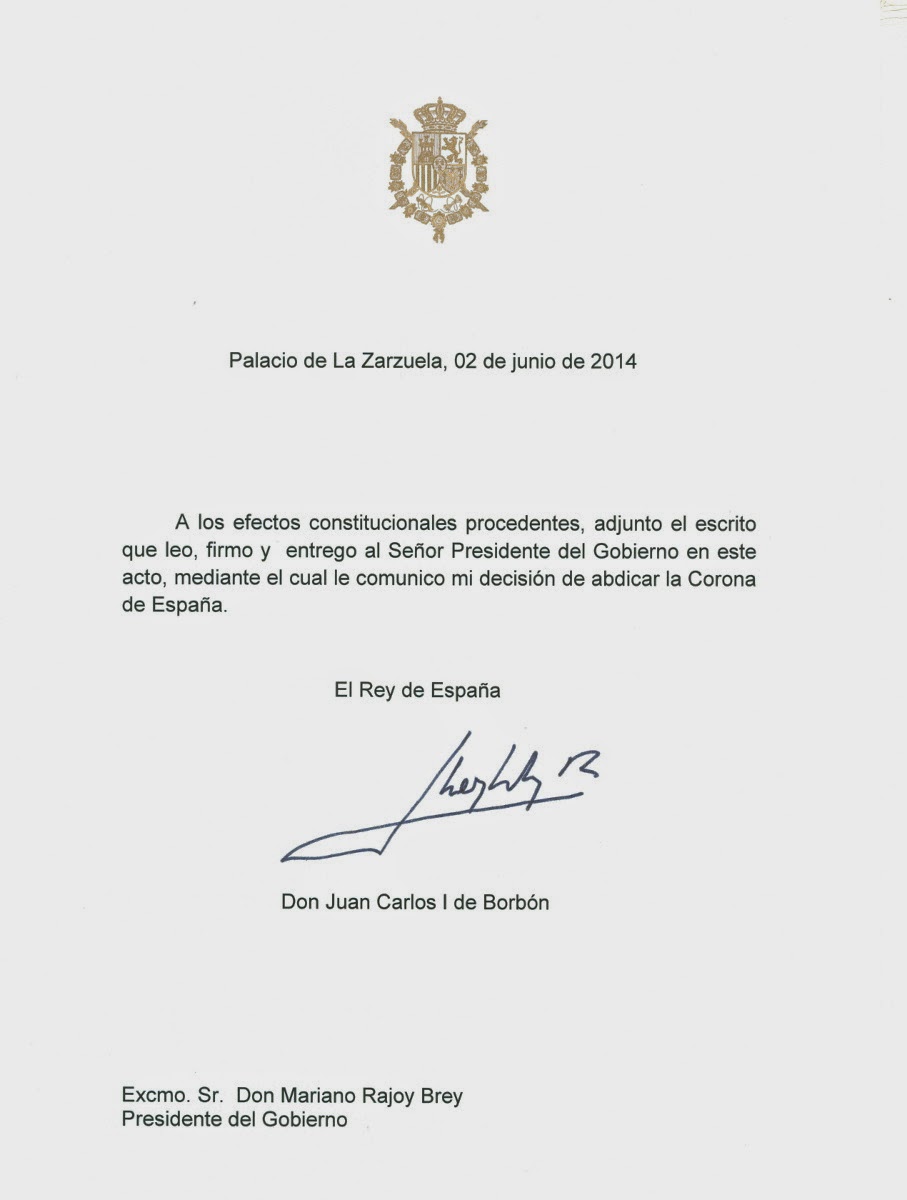 The Spanish Royal Court most surprisingly announced this morning that King Juan Carlos, who has reigned since 1975, has decided to abdicate the throne. The decision was communicated to prime minister Mariano Rajoy in form of a signed letter (see picture above). Later the same day the king appeared on Spanish TV explaining his decision.

In accordance with the Constitution of Spain Article 57,5, the Government will soon propose a bill to the Parliament (Cortes Generales). The so-called "organic law" (constitutional law) will have to be passed by both houses and will come into effect when it has been published in the legal gazette. According to the Spanish media today the process is expected to take place before the end of June. The newspaper El Mundo outlines the process here (in Spanish).

King Juan Carlos' only son, Felipe, Prince of Asturias, will succeed the throne as Felipe VI.

Although there has been some speculations over a possible abdication for some time, following the scandals that have surrounded the royal house the last few years, most people were taken by surprise by the news this morning. The decision is by many commentators interpreted as an effort to save the monarchy, given its declining popularity. The king's poor health has also been pointed out as a main reason.

It is kind of sad that King Juan Carlos' reign ends this way, leaving the throne during such an institutional crisis. He has on several occasions demonstrated his lack of judgment both in his public role and in his personal life. Fortunately his successor seems to be much more in touch with the lives of the Spaniards and will hopefully give the institution the "new energy" it needs.

But despite all the scandals, King Juan Carlos will have to be remembered for his role in Spain's transition to democracy following the Franco dictatorship and for the way he handled the coup in 1981.

See Prime Minister ("President of Government") Mariano Rajoy's comments here and the statement (in Spanish) of the President of the Congress of Deputies, Jesús Portada, here.