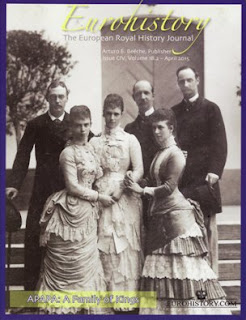 I was pleased to find the latest issue of the European Royal History Journal – in my mailbox last Sunday when I returned home from the first part of my summer vacation. Great to have good reading material on my way to and home from work.

The latest issue's first article is the traditional The Who Is In the Photo series, this time a photo of the Battenberg family taken around 1895 – Princess Louise, Princess Alice, Princess Victoria, Prince George and Prince Louis (Ludwig) of Battenberg. The one missing is Prince Louis the younger, later Earl Mountbatten of Burma, obviously because he had not been born yet. Ilana D. Miller outlines the history of this branch of the Battenbergs.

The next one out is the Part II of An Interdisciplinary Discussion. The Nassaus of Luxembourg by Roberto Cortez Gonzáles, and yet again we get a thorough presentation of the history of the Grand Ducal family of Luxembourg, with many details I either didn't know or have forgotten about. I have 2-3 books on the Luxembourgs in my collection, but it has been a while since I have read them.

The author and Queen Victoria Descendants genealogist Marlene A. Eilers Koenig has this time contributed with an article titled Frederica of Hanover. A Pasionate & Obstinate Princess. Frederica (Friederike) (1848–1926) was the 2nd child of King Georg V of Hannover and Queen Marie, née Princess of Saxe-Altenburg.The article stops well before Frederica's marriage to Baron Alfons von Pawel-Rammingen (1843–1932), but fortunately the article is "to be concluded", so the readers have more to look forward to. Royals who go against the flow are always interesting to read about. Thinking about royals often listed as examples of enterring "non-equal marriages", it seems that Frederica most often is not mentioned.

Coryne Hall has contrbutied to many articles in both ERHJ and Royalty Digest Quarterly over the years, and this time she focuses on the Danish Royal Family with the article titled The Descendants of King Christian IX of Denmark. APAPA. Even if the title suggests otherwise, she has limited her work on the Danish. The article doesn't suggest that this is is "only" the first part of a series on the KCD (does this abbreviation work as well as QVD (Queen Victoria's Descendants), by the way?), but let's hope so!

I really enjoyed reading part I of Janet Ashton's article "Our ally has shamefully betrayed us". Italy Enters the Great War in volume 18.1, and the second and final part included in the April issue was as enjoyable. Now also with a full bibliography, so I can understand better the notes from last and current issues! The two-part article more or less covers the great war up to 1916, so I wonder if Janet Ashton will write more about Italy's role in WW1 later on?

The latest issue also has a book review column, and Coryne Hall returns with her review of Royal Gatherings. Volume II. 1914-1939 by Ilana D. Miller and Arturo E. Beéche, the latter being the ERHJ editor and publisher. As Hall contributes so often to the ERHJ, one wonders if the task could have been left to someone "outside the circle". Not that there is anything wrong with the review itself, but I sometimes feel that the world of royalty writers is too small. Anyway, here is Marlene A. Eilers Koenig's review in her blog Royal Book News.

Finally, we get the traditional Royal News section, which this time includes news from Brazil, Bulgaria, Reuss, Saxe-Coburg & Gotha, Two Sicilies, Prussia, United Kingdom, Hohenlohe-Oehringen and Wied. Of course, when you read these genealogical news they are already old, but considering the fact that many websites come and disappear again, it is useful to have these news on paper for the record.

For earlier articles on the magazine, please go here.
Posted by Dag T. Hoelseth at 21:54