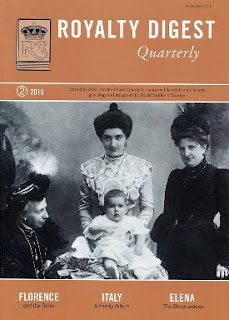 The second issue this year of Royalty Digest Quarterly arrived in my mailbox in early July, just before I left for the first part of my summer vacation. Always nice to bring great reading material with you on your travels!

Most articles this time are devoted to Italy and/or the Italian Royal Family (House of Savoy), and the photo on the front page shows four generations of the royal family: The later King Umberto II as baby, being held by his mother, Queen Elena, née Princess of Montenegro. To the left Umberto's great-grandmother Elisabeth, and to the right the baby's grandmother Queen Margherita.

Not surprisingly the editor and publisher of RDQ,  Ted Rosvall, spends his Editor's Corner on the major royal events in Sweden earlier this year - Prince Carl Philip's marriage to Sofia Hellqvist and the birth of Prince Nicolas.

In my article about the first issue of RDQ this year, I mentioned that I wouldn't be surprised if Coryne Hall, author of Princesses on the Wards. Royal Women in Nursing Through Wars and Revolutions (2014) would continue to cover more royal nurses in future issues of the RDQ. Queen Elena of Italy, née Princess of Montenegro, was not a trained nurse, but she nevertheless made great efforts in setting up hospitals during the wars and other national catastrophes, and in Hall's article Elena - the "Shepherdess" Queen of Italy, we can for instance read about how she nursed the injured after the earthquake in Messina in 1908.

The next article out is written by the periodical's historical consultant, Charlotte Zeepvat, finishing the story about Princess (Helena) Victoria of Schleswig-Holstein, 'So loyal and strong in her affections...'. She was quite an character, and the article is well written. One could perhaps have wanted more details about the last part of her life, but maybe it was not as eventful as the first part.

If you are interested in royal history, you can literally spend all your vacations in Germany, as there are so many royal palaces, castles, lodges and other buildings to explore! One example is Kranichstein, the hunting lodge of the Hesse-Darmstadt family. Elizabeth Jane Timms has written a nice presentation of the lodge and its history.

Then Charlotte Zeepvat returns with her traditional family albums, this time the Royal House of Italy gets all the attention. Besides a two pages' long introduction, the reader can enjoy 108 illustrations, most are of various members of the Savoy dynasty, while the first photo is of Castello di Racconigi (yet another castle I have to visit one day). Finally, as always, Zeepvat brings 3 pages showing the family genealogy.

The next one out is the short article Getting the Message about how royal postcards "were the emails of the early twentieth century", written either by the royals or by other people on cards of royalty. The article is just signed "CMZ". I gather the author is Zeepvat once again. :-)

Richard Thornton has contributed to the last article of this issue, titled With the Tecks and friends in Florence. Unfortunately there are no book reviews this time either (I hope that Rosvall has not dropped including book reviews altogether). But as usual we are treated with The World Wide Web of Royalty, this times with news from Austria, Bulgaria, Fugger von Babenhausen, Erbach-Schönberg, Great Britain, Hannover, Prussia, Saxony, Sweden, Two Sicilies and Ysenburg and Büdingen.

Information on Royalty Digest Quarterly can be found at its editor's website Royalbooks.se. See earlier presentation of RDQ here. See also its Facebook page.
Posted by Dag T. Hoelseth at 19:19