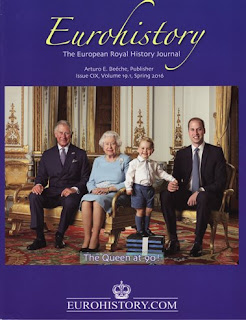 Eurohistory. The European Royal History Journal, issue CIX, Volume 19.1, Spring 2016, arrived in early July, but as with the latest issue of RDQ, I have not been able to comment on it before now. The latest issue of Eurohistory is the first out since the publisher decided to turn into a quarterly magazine rather than bi-annual. The result is a rather thick volume with 64 pages full of articles and photos.

One of the official portraits taken in connection with the British Queen Elizabeth II's 90th birthday has found it's way on the ERHJ cover. It is a great photo, even if the «footstool» looks a bit silly. It helps the composition of the photo, of course, given Prince George's height, but they could have made a nicer version of the footstool, perhaps. All in all a nice presentation of four generations with British royals.

One of ERHJ's regular contributors, Coryne Hall, has written the opening article The Queen at 90! Then yet another regular contributor, Janet Ashton, is back with the article War On All Fronts and the End of Austria-Hungary. "Cecco Beppe has kicked the bucket!" The title gives it all, but the focus is not only on the end of the empire, but the beginning of new states like Czechoslovakia and the Kingdom of Kingdom of Serbs, Croats and Slovenes (later Kingdom of Yugoslavia). As usual the article is based on an impressive bibliography, which includes Christopher Brennan's university thesis from 2012, Reforming Austria-Hungary: beyond his control or beyond his capacity? The domestic policies of Emperor Karl I November 1916 – May 1917, which also seems to be worth looking more into.

Marlene Eilers Koenig then follows up with the second part of Princess Augusta of Cambridge. Grand Duchess of Mecklenburg-Strelitz. The rather detailed article covers her married life and the first years of widowhood. We learn among others about her first ride in a motor car, which went well, even if she complained of a bach ache afterwards. Third part follows in the next issue, I presume.

Then we are taken to another continent as Katrina Warne gives an insight into the summer residence Simla. The Viceregal Lodge in what is today spelt Shimla in Himachal Pradesh in India. Simla is where Lord Mountbatten oversaw the transfer of India from the British empire to independence in 1947. Seems like a place worth visiting. We are warned about the poor gift shop, though. :-)

Coryne Hall has spent a lot of reading earlier this year, as she has this time contributed to 8 book reviews:
Finally we are treated with a Royal News section, this time news from the Imperial, royal or princely houses of Albania, Austria, Hohenzollern, Liechtenstein, Oldenburg, Bourbon-Parma, Romania, Saxe-Coburg and Gotha, Saxe-Weimar-Eisenach, Sweden, United Kingdom, Yugoslavia (Serbia), Castell-Castell, Leiningen, Ligne, Salm-Salm, Sayn-Wittgenstein-Berleburg, Solms-Laubach and Toerring-Jettenbach.

For earlier articles on the magazine, please go here.
Posted by Dag T. Hoelseth at 11:59