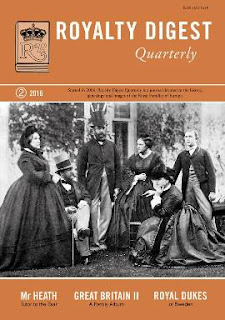 Queen Elizabeth II of the United Kingdom celebrated her 90th birthday earlier this year, and in his Editor's Corner Ted Rosvall makes a pointg of this and lists other monarchs who have also reached the grand old age.

Trond Norén Isaksen has written the opening article titled Swedish Royal Dukedoms, in which he gives an outline of the Swedish dukedoms given to members of the royal house in both medieval and modern times. Isaksen has most usefully included a map of Sweden with the Swedish dukedoms bestowed since the revival of the ducal titles in 1772. I have not much to add here, but would like to say a few words concerning Isaksen's comments on Prince Oscar (1859–1953), who forfeited his rights to the Swedish throne in 1888 when he married «a private man's daughter», Ebba Munck af Fulkila: «Contrary to what is sometimes claimed, Oscar did not receive a new princely title, nor was he created Prince Bernadotte; he remained Prince Oscar, to which the surname Bernadotte was added». Isaksen is right, of course. I must admit that I am one of those who earlier thought that Prince Oscar was titled «Prince Bernadotte», due to among others the references to «Prins Bernadotte» or «Prinsen och Prinsessan Bernadotte» in the public (government) newspaper Post- och Inrikes Tidningar. But there is no record that such a title was ever given, whether formally or informally (as in «the King let it be known»). If Prince Oscar had also lost his prince title, he and his wife would have been referred to as «herr och fru Bernadotte» («Mr. and Mrs. Bernadotte»). The reference «Prince and Princess Bernadotte» thus makes sense.

Helen Rappaport has written the most wonderful article titled Mister Heath. The English Tutor who Taught Nicholas II to be the Perfect Gentleman. Rudy de Casseres has also contributed to the article. I just love articles which not only deal with royalty, but also all the people surrounding them – court and staff members, tutors and nannys etc. The tutor was Charles Heath (1826–1900).

The next article, 'My dearest Patsy'. A nurse and her royal patients: Part I by Charlotte Zeepvat comes in the same category. Here we get the story of the Scottish-born nurse Elizabeth Paterson, née Stuart, who was engaged by many royal women in connection with giving births.

Zeepvat is as usual also responsible for the traditional Family Album, this time the follow-up article titled The Royal House of Great Britain and Ireland. A Family Album II – The House of Hannover. Besides the introduction, the album includes 75 illustrations and three pages with genealogical tables.

Coryne Hall is yet another regular contributor to RDQ (and to the European Royals History Journal as well), and this time she has made the contribution An Unusual Royal Album, which deals with an album containing hairlocks of Swedish (and Norwegian) royals and their relatives. The topic is interesting, but I wish she had done more research, or that the editor had stepped in before the article was published. When she comments on the death of the then Crown Prince Carl's son Carl-Oscar, who died in 1854, 15 months old, she claims that «His death caused a crisis, as although Carl and Louisa's daughter Louisa could reign in Sweden she could not inherit the throne of Norway.» I wonder how she got into that idea. The succession law in both Sweden and Norway was agnatic. The Swedish law was not changed until 1980, in Norway as late as 1990. She later also claims that King Carl XIV Johan «incorporated Norway into Sweden», which of course is not correct. Carl Johan's role in securing the throne of Norway for the king of Sweden is well known, but it was a personal union, Norway was never «incorporated» (as in «becoming a part of») Sweden.

The latest issue also includes the obituaries of Prince Albrecht of Castell-Castell (1925–2016), written by Bearn Bilker, and of writer and Romanian royal house expert John Wimbles (1935–2015), by David Horbury.

Information on Royalty Digest Quarterly can be found at its editor's website Royalbooks.se. See earlier presentation of RDQ here. See also its Facebook page.
Posted by Dag T. Hoelseth at 22:36