Arms of Prince Gabriel of Sweden

The National Archives of Sweden published today the arms of Prince Gabriel of Sweden, whose christening will take place on 1 December.

The arms were presented at the meeting of the Heraldic Committee of the National Archives on 24 October 2017. The four quarters of the arms show the lesser coat of arms of Sweden (field 1 and 4), the arms of Folkunga (field 2) and in field 3 the arms of Dalarna. As previously mentioned, Prince Gabriel was also given the title of Duke of Dalarna at the Council of State held at Stockholm Palace on 4 September 2017. The inescutcheon shows the arms of the House of Bernadotte.The arms are then crowned by the Swedish prince crown. Prince Gabriel will receive the Order of the Seraphim in connection with the christening, which explains why the arms are encircled (in lack of the correct heraldic term) by the collar and badge of the said order. The arms are drawn by the heraldic artist Henrik Dahlström, the Swedish National Archives.

The arms of Dalarna, taken from the website of the National Archives:

Blazon: "Azure, two Dalecarlian Arrows Or in saltire point upwards pointed Argent and in chief a Crown of the first". Source: Wikipedia. 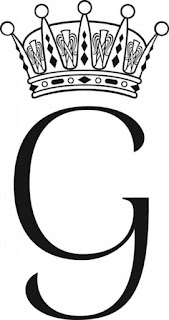 The monogram consists of the initial G and a prince crown above and is drawn by the heraldic artist Vladimir A Sagerlund.
Posted by Dag T. Hoelseth at 22:16