Last weekend (14-17 October 2011) I made my second trip to England this year. Last time was in April when I for the first time attended the Royalty Weekend in Ticehurst, East Sussex. I also spent one day in London, meeting friends and doing some shopping. It was the first time for a very long time that I visited England without watching at least one football (soccer) game. During the Royalty Weekend my English favourite team, Norwich City, played Swansea City away and lost 0-3, so I guess it didn't matter that much that I focused on royal history instead of travelling to Wales! 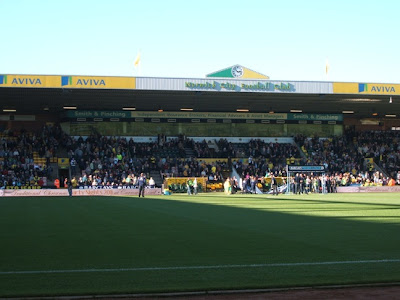 Carrow Road, Norwich. City Stand in the background.
Fortunately I got a chance to see football in England again in October because Supporterunionen for Britisk Fotball (SBF) (The Supporters' Union of British Football), which is the umbrella organisation for all the Scandinavian supporters' clubs following various British football teams, invited representatives of the membership clubs to an anniversary trip in connection with the organisation's 25th anniversary.

I was chairman of the Norwich City Supporters' Club of Scandinavia (NCSCS) from 1983 to 1996 and returned to the committee in June this year, now as an ordinary member. As none of the other members of the NCSCS committee were able to represent the supporterts' club that particular weekend, I got the chance instead. I was actually present when the SBF was founded back in 1986, so I guess it was only natural that I joined the other supporters' club representatives for the football weekend. 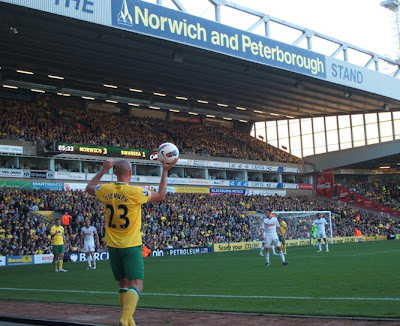 Marc Tierney ready for a throw-in.

On Saturday 15 October I took the train from London up to Norwich with members of the Capital Canaries, the London-based supporters' club for the Canaries (nick-name of Norwich City). I will not get too much into detail about the football part of the weekend, as I am going to write a piece for our newsletter, The Canary Magazine. But I am happy to tell that my favourites, who won promotion to the Premiership after last season, most deservedly beat Swansea City 3-1! The atmosphere at the stadium was great, and the weather was warm and lovely. 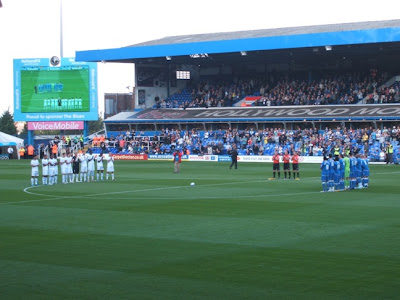 On Sunday the whole SBF group travelled up to Birmingham to watch the Championship game between Birmingham City and Leicester City. The home team won 2-0. 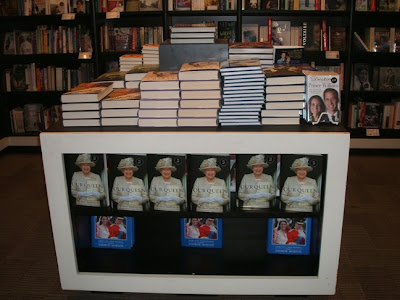 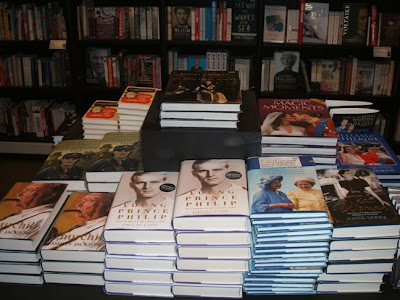 The display included one of the biographies I ended up buying, Young Prince Philip. His Turbulent Early Life by Philip Eade.

On Monday 17 October 2011 I had a few hours to spend in London before heading for Stansted and the flight home to Norway. My shopping round was not so very different from the one I had after the Royalty Weekend in April. I bought a few stamps at the Stanley Gibbons stamps shop at Strand, before visiting the bookstores at Piccadilly - Waterstone's and Hatchard's. I think the latter could do more out of the royal biographies section - the former seems to be more professional regarding how to display news items, but still I spent more time at Hatchard's. One of the reasons might be that one of the employees I have known since the early 1990s was in that day, and I hadn't seen him for quite some time. Always nice with a little chat about royalty!

I bought two biographies which as far as I remember (please correct me if I am wrong) were published after my last visit to London - Nazi Princess. Hitler, Lord Rothermere and Princess Stephanie von Hohenlohe by Jim Wilson (Stroud, Gloucestershire: The History Press, 2011) and Young Prince Philip. His Turbulent Early Life by Philip Eade (London: HarperPress, 2011). The latter was actually bought at Waterstone's, as it was signed by the author. Not sure why if was so important to me, though. It is not supposed to contain that much new information, but the topic interested me nevertheless.

I almost regret that I bought Jim Wilson's book. Now, it must be stressed that I have only read a few chapters of the book, but what I have read so far makes me a bit sceptical. With "access to secret British intelligence files, only derestricted and released to The National Archives in 2005, and a large collection of Princess Stephanie's own papers now held in the Hoover Institution Archives at Stanford University in California" (cf. the introduction), the book seemed promising, but as always it is important how you make use of the sources and how you present the story.

"Princess Stephanie von Hohenlohe" refers to the Vienna-born Stéphanie Richter (1896-1972), who in 1914 married Prince Friedrich Franz of Hohenlohe-Waldenburg-Schillingsfürst (1879-1958). After her divorce in 1920, she became "a close confidante of Hitler, Goering, Himmler and von Ribbentrop" (cf. the front inside flap). Stéphanie was born as the daughter of Ludmilla Kuranda, a Jewish woman from Prague, following - according to the biography - an affair with one Max Wiener. Kuranda, or rather Mrs. Richter, who converted upon marriage converted to Catholism, was married to one Johann "Hans" Richter who was in prison serving a sentence for embezzlement, and who accepted the child as his own after he was released.

One thing is that the author ignores the obvious question of the morganatic status of Prince Friedrich Franz's marriage to Stéphanie Richter. She surely kept the Hohenlohe name following the divorce, and she might have used "her title" all along, but as far as I know the marriage was not deemed dynastic. I find it much worse, though, that the author claims in connection with her marriage to Prince Friedrich Franz and the child that was born into the marriage, Franz Joseph, that the true father of the son was Archduke Franz Salvador, Prince of Tuscany (1866-1939) and son-in-law of Emperor Franz Joseph I of Austria, without giving any source for the paternity. It might be true for all I know, but then the author should have told how the information was reached. There is no footnote or any clue whatsoever in the particular paragraph on page 31. Even more funny, on the very same page the author refers to Stéphanie's son as "illegitimate". No, no, no! Even if he was fathered by another man than his mother's husband, he was born into wedlock and was of course legitimate at birth. Pater est quem nuptiae demonstrant!

Oh well, I will finish the book eventually and might come back with a review later on. My general impression might change, but as of now I am a bit disappointed. I only hope that I will not get similarly disappointed with Philip Eade's biography of the young Prince Philip after having read the first 55 pages! If you have read any of the said biographies, you are of course free to post your thoughts!

After more shopping, I got home to Oslo late Monday evening (17 October). I have travelled a lot recently - among others to Rhodes (Greece), England and Mandal in Southern Norway this weekend - one reason why there has been little time for blogging and website updating. Other reasons are of course family and work commitments etc. I am also going to spend a weekend in Tallinn, Estonia in November, but apart from that I hope to do more blogging from now on, i.e. more frequently than in the last couple of months (I will not make any promises, though!). Besides news items (there was unfortunately no time to write about the Bhutanese Royal Wedding of 13 October or Princess Märtha Louise's 40th birthday celebration in September, but the initiatives to change the Danish Constitution and the British Act of Settlement can easily be commented on later on), I have numerous cemetery visits to write about - could be as many as 30, 40 articles, I think (graves and cemeteries in Norway, Denmark, the United States, Greece, Turkey, Montenegro and the United Kingdom). And from my many travels there are many royal history topics to cover as well!

Postscript 10 November 2011: Tim Allman of the Capital Canaries has mentioned me in his review of the Swansea game (link). Unfortunately he has mixed things up and written that I come from Sweden! Yes, we did talk about Swedish players during the train trip, including Ottosson and Svensson, but we also talked about other Scandinavian football players formerly with Norwich, such as Åge Hareide, today manager of Viking FK, Erik Fuglestad (now at Bryne FK) and Henrik Mortensen (from Denmark).

Postscript 19 December 2011: See Supporterunionen for Britisk Fotball's chairman Trond Fuhre's article about the anniversary trip at www.supporterunionen.no (in Norwegian, but with photo).