The Prince of Wales and the Duchess of Cornwall in Norway 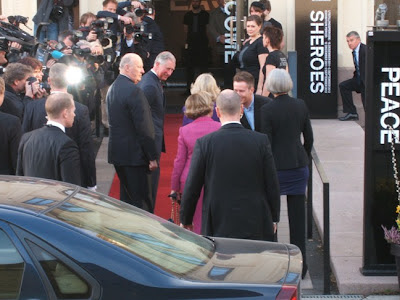 The Prince of Wales and the Duchess of Cornwall arriving at the Nobel Peace Center together with the King and Queen of Norway. The Queen is shaking hands with Eskil Pedersen, chairperson of the Workers' Youth Leage.

The Prince of Wales (Prince Charles of the United Kingdom) and his wife Camilla, Duchess of Cornwall, arrived in Oslo today for a three-day visit. The princely couple is touring Norway, Sweden and Denmark as part of the commemorative activities marking the diamond jubilee of Queen Elizabeth II. The main celebration will take place in June 2012.

The Prince of Wales and the Duchess of Cornwall arrived at Oslo Airport Gardermoen at 1.40 p.m. and were received by Crown Prince Haakon and Crown Princess Mette-Marit. Later the princely couple were accompanied by King Harald and Queen Sonja at the traditional wreath laying ceremony at Akershus Fortress. The Prince of Wales then met Prime Minister Jens Stoltenberg in the official PM residence, before the princely couple and the king and queen of Norway arrived at the Nobel Peace Center just before 4 p.m. The purpose of this visit was to meet survivors from the attack at Utøya on 22 July last year and other Norwegian youth leaders. I was present outside the centre when the royals arrived (I was not close enough to get any decent photos, though). The number of spectators was not that impressive - it might be because the details of the program was released only at 10.30 today - but the spring weather was lovely, and the Duchess of Cornwall received most cheers.

In the evening King Harald and Queen Sonja hosted an official banquet in honour of the Prince of Wales and the Duchess of Cornwall at the Royal Palace in the presence of 74 guests. Among them were Crown Prince Haakon, Crown Princess Mette-Marit, Princess Märtha Louise and Princess Astrid Mrs. Ferner.

The visit continues at Bergen tomorrow. More details of the visit can be viewed at Kongehuset.no. The website includes links to a photo album, which is being updated continously, and the speech King Harald V held at the banquet tonight. The complete press program can be viewed here (pdf, in Norwegian). See also VG.no, Dagbladet.no, Aftenposten.no and NRK.no for articles and more photos.

Postscript 3 April 2012: One of the photos I took outside the Nobel Peace Center turned out to be not that bad after all, so I added it tonight.