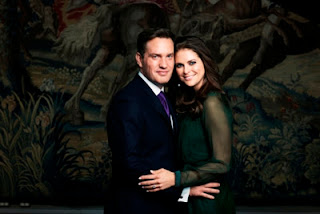 After His Majesty The King of Sweden had given his consent to the marriage between Princess Madeleine and Mr Christopher O'Neill, His Majesty requested the approval by the Swedish Government, in accordance with the procedures set out in the Swedish Constitution.

The wedding date has not yet been decided but it is planned to take place during the summer of 2013.

The court also published an interview with the couple as well as Chris O'Neill's CV. The latter informs us that Princess Madeleine's fiancé was born on 27 June 1974 in London, England as the son of Paul O'Neill (d. 2004) and Eva Maria O'Neill, née Walter.* His mother has been married four times and has given Chris two half-sisters: Tatjana and Natascha. Chris also has three half-sisters - Stephanie, Annalisa and Karen - on his father's side.

Christopher, who has both British and US American citizenship, but is not seeking Swedish nationality, attended boarding school in St. Gallen, Switzerland before obtaining a bachelor degree in International Relations from Boston University. He also has obtained a Master's degree in Business Administration from  Columbia Business School in New York.

After graduating he has worked in the finance sector, working for firms such as NM Rotschild & Sons and Steinberg Asset Management. Today O'Neill is a Partner and Head of Research at Noster Capital, which is an investment firm with offices in London and New York City. We are also told that O'Neill enjoys downhill skiing, tennis and golf, while among his other passions are music, literature and - of all football clubs - Chelsea FC.

Chris O'Neill's father is from New York originally, but moved to London in the 1960s. He has Irish, Scottish and Italian ancestry, while Chris' mother is Czech/German.

Mr. O'Neill proposed to the princess in early October. The wedding is planned for the summer of 2013. The couple has for now decided to continue living in the United States.

Princess Madeleine was earlier engaged to Jonas Bergström, but the relationship ended in 2010.


* Besides the details from the Royal Court, information for this article is gathered from the thread Ancestry of Christopher O'Neill, at Nobiliana.de, sub-forum Ancestry & Descendancy, with contributions by Netty Leistra, Hein Bruins and the signature "Ronald66".