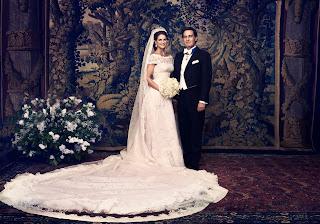 I only managed to watch "the basics" of the ceremony, but would describe it as "solemn and nice", but of course less ceremonious than Crown Princess Victoria and Prince Daniel's wedding in 2010. The couple seemed to be marked by the gravity of the occasion, but their love and affection for eachother shined through.

As I hadn't expected to see much of the ceremony, I had not read myself up on the event in advance, and was therefore surprised by little Princess Estelle's presence in the church. She seemed to enjoy herself most of the time, but got a bit bored in the end. The choice of music for the ceremony is of course a matter of taste. I would personally have preferred more traditional hymns rather than the songs performed by Marie Fredriksson (of Roxette fame) and Peter Jöback. I really enjoyed the Bridal Recession (Wedding March from Delsbo). The program of the ceremony can be viewed here.

For the record, the officiating clergy at the wedding were Chief Court Chaplain of the Royal Court and Bishop Emeritus Lars-Göran Lönnermark and Vicar of the Royal Court, Court Chaplain Michael Bjerkhagen. Mr. Christopher O'Neill's best man was Mr. Cedric Notz. He is according to the court a childhood friend of Austrian and Swiss descent and resides in Switzerland.

The bridal attendants at the wedding were Lillie von Horn, twin sisters Annais and Chloe Sommerlath, Count Louis Countess and Chiara Abensperg und Traun, and Jasper D'Abo. Princess Madeleine's wedding dress was created by the Italian designer Valentino Garavani (and that is as far as I will get into that).

The wedding celebrations begain on Friday 7 June with a private dinner for invited guests at Grand Hôtel, Stockholm. Following the wedding ceremony and the cortège, a wedding banquet (which goes on as I write) took place at Drottningholm Palace. More details about the wedding can be read here.

Several bloggers and royalty board participants have commented on the guest list already, and I have not that much to add. Interesting to note, howver, that Prince Carl Philip's girl-friend/live-in-partner, Sofia Hellqvist, in the Palace Church was sitting in the "family section". Many commentators regard this as yet another sign that she is fully accepted and that an engagement is not too far away.

I have, for the record, posted the guest list as published by the Royal Court, although with a few adjustments. For instance, as I find it a bit strange that Prince Pierre and Princess Silvia of Arenberg (d'Arenberg) were presented just only as "TT.SS.HH. Prince och Princess d'Arenberg", considering the numbers of princes and princesses of that house. But maybe that is just me. I am also intrigued by the presence of a Mr. Herbert Hoover, probably a friend of Chris O'Neill. How is he related to  Herbert Hoover (1874-1964), President of the USA 1929-1933? I consulted the Hoover Genealogy at the website of the Herbert Hoover National Historic Site Iowa, but didn't get a clue. The genealogy is not updated, though. I found an obituary of the president's grandson Herbert Hoover III (1927-2010), but as far as I can tell he had no son named Herbert Hoover IV. Anyone out there with more details?

If anyone wonders why Crown Princess Mette-Marit of Norway was absent from the gala dinner on Friday, it was because she was on her way home from a Red Cross engagement in Burma (Myanmar). She arrived in Stockholm early on Saturday morning.