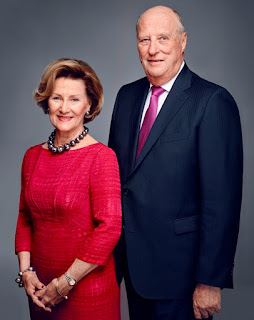 Today, 17 January 2016, it is 25 years since King Olav V of Norway died and his son Harald succeeded to the throne. The anniversary has been  marked during the weekend with several events.

There was no Council of State on Friday. Instead, Their Majesties received deputations at the Royal Palace. Among the representatives of the offical Norway attending in order to congratulate the king and queen were Prime Minister Erna Solberg on  behalf of the Government, Secretary to the Government Nina Frisak (who is to retire in July 2016) on behalf of the PMO and the public administration, Vice President of the Storting (Parliament) Marit Nybakk, President of the Supreme Court of Justice Tore Schei (who is also going to retire this year) and Jørn Are Gaski on behalf of Sametinget (the Sami Parliament).

The Chief of Defence, Admiral Haakon Bruun-Hanssen, conveyed his congratulations on behalf of the Military Services and County Governor of Buskerud Helen Bjørnøy on behalf of all the county governors. The diplomatic corps was represented by Argentina's Ambasador, H.E. Juan Manuel Ortiz de Rosas. Bishop Helga Haugland Byfuglien, who is praeses of the Norwegian Bishops' Conference, represented the Church of Norway, while the chairman of the Islamic Council of Norway, Ghulam Abbas, conveyed his congratulations on behalf of the Islamic society of Norway. Among others coming to the Palace on Friday were Oslo's mayor Marianne Borgen and chairman of Kommunenes Sentralforbund (Norwegian Association of Local and Regional Authorities), Gunn Marit Helgesen.

A congratulatory protocol was also opened on Friday for the diplomatic corps and later also for the public (in English). On Friday the Royal Court released new official portraits of the King, Queen and other members of the Royal Family. (A monogram to be used in connection with the anniversary was released on 18 December 2015.)

On Saturday evening a dinner was held at the Crown Princely estate of Skaugum in Asker. Present were most descendants of King Olav and their partners, besides the Swanstrøms (Haraldsen family) and Crown Princess Mette-Marit's mother Marit Tjessem and her partner. In addition King Carl Gustraf and Queen Silvia of Sweden and Queen Margrethe of Denmark. Missing were Princess Ragnhild Mrs. Lorentzen's youngest daughter Ragnhild and her family, as well as Crown Princess Mette-Marit's son Marius Borg Høiby, who attended a school ball instead. The following were in attendance according to the group photo (see link above), starting from back row (left):

The anniversary day was opened with a service in the Palace Chapel, where the members of the royal family, other family members, King Carl Gustaf and Queen Silvia of Sweden, Queen Margrethe of Denmark and representatives of the official Norway were in attendance. Bishop Helga Haugland Byfuglien presided. Afterwards the royals walked out to the Palace Square to watch (and some of the also took part in) the various winter activities taking place there, which included skiing, snowboarding, ski jumping, ice slading and biathlon with laser rifles. I spent a few minutes at the Palace Square and was impressed with how many people who came along wither to participate or watch, considering how really cold it was outside. The many people made it difficult to spot the royals, but at least I saw the queen before I left. Later on the royal family appeared on the balcony, in addition to Princess Astrid Mrs. Ferner, Queen Margrethe and King Carl Gustaf and Queen Silvia, so I guess I left too early (but I had to leave due to a dinner with friends).

There were also activities at the University Square and the Spikersuppa ice skating rink. Later the royal family attended a gala performance in the University Aula, followed by a private dinner at the Royal Palace in the evening.The gala performance was only for the royal family and invited guests, but the public could watch from a largre screen outside. The winter and other outdoor activities, including the performance gala, was the Norwegian Government's present to Their Majesties. I must say it was a wonderful way for the people to take part in the celebrations!

Some links to more information as well as photos from the events: