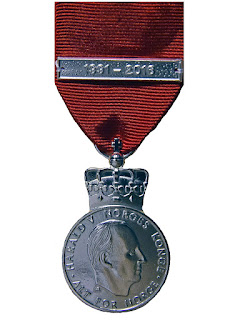 In order to commemorate King Harald V's 25th anniversary as King of Norway on 17 January 2016 His Majesty founded a new medal named King Harald Vs Jubilee Medal 1991–2016. In the order of precedence among the Norwegian decorations the new medal has been listed as no. 38. The list shows that also King Haakon VII and King Olav V founded similar medals on their 25th anniversary.

The new medal has been awarded to members of the Norwegian Royal Family, the foreign royal guests attending the celebrations last weekend, current and former court and staff members, the King's aides-de-camp, then Royal Police Escort, members of the government and other current and former representatives of the official Norway who have assisted the king and the royal family in carrying out their work. Among the recipients were:

The medal is in silver, 30 mm mounted closed crown. It is carried in a crimson ribbon with a sewn spangle of silver with the text «1991–2016».

The medal has been engraved by Ingrid Austlid Rise and produced by Polath, Germany for Reide. Ingrid Austlid Rise is a goldsmith working for Det Norske Myntverket. Her biography can be found on Wikipedia (in Norwegian).
Posted by Dag T. Hoelseth at 23:44