Christening of Prince Oscar of Sweden 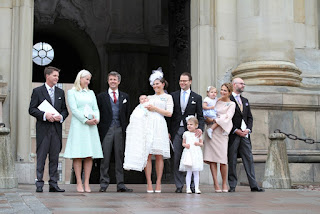 Photo: Hans Garlöw/Kungahuset.se. In the middle Crown Princess Victoria with Prince Oscar in her arms, Prince Daniel and Princess Estelle. To the left the sponsors Hans Åström, Crown Princess Mette-Marit of Norway and Crown Prince Frederik of Denmark. To the right Princess Madeleine carrying Princess Leonore and beside her the last of the five sponsors, Oscar Magnuson.

The program of the christening ceremony can be viewed here.

Among the guests at the church ceremony and reception were:

The Swedish Royal Family
HM The King's family
HM The Queen's family
Other foreign royal guests
In addition Prince Daniel's parents Olle and Ewa Westling, his siblings and their families and other family members, as well as representatives of Riksdagen (the Parliament), the leaders of the polical parties, the Government and the church, other authorities, including the governors of Stockholm, Skåne and Västra Götaland and finally representatives of the corps diplomatique. For a full guest list, go here. 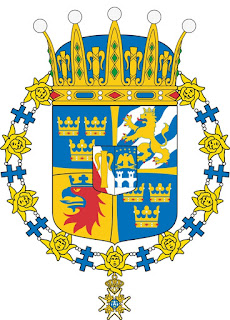 The arms of Prince Oscar of Sweden. (The image is taken from the Swedish National Archives' press photo section, where the photos and images are free of use.)

The arms and monogram of Prince Oscar were also published in connection with the christening. The four quarters of the arms show the lesser coat of arms of Sweden (field 1 and 4), the arms of Folkunga (field 2) and in field 3 the arms of Skåne (Scania) (Prince Oscar is also Duke of Skåne), while the inescutcheon shows the arms of the House of Bernadotte. The arms are crowned by the princes crown. The arms are drawn by the heraldic artist Henrik Dahlström, the Swedish National Archives. The monogram consists of the initial O and a prince crown above.
Posted by Dag T. Hoelseth at 22:38