UK: The marriage of Princess Eugenie of York and Jack Brooksbank 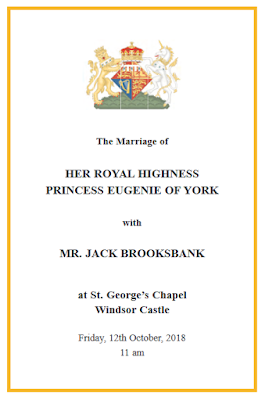 The Dean of Windsor, David Conner, officiated the ceremony. Princess Eugenie's elder sister Princess Beatrix served the role as maid of honour, while Jack's brother Thomas was his best man. The order of service can be viewed here.

Page Boys were Prince George of Cambridge and Louis de Givenchy (son of Olivier and Zoe De Givenchy, friends), while special attendants were Lady Louise Mountbatten-Windsor, who took good care of the bridal party, and Viscount Severn, both children of the Earl and Countess of Wessex and thus first cousins of the bride.

Most members of the British Royal Family attended the wedding, including Queen Elizabeth, Prince Philip, Duke of Edinburgh, the Prince of Wales, the Duke and Duchess of Cambridge and the Duke and Duchess of Sussex, the Princess Royal (Princess Anne) and Sir Timothy Laurence, the Duke of York (and hs former wife Sarah, Duchess of York), Princess Beatrix of York, the Earl and Countess of Wessex. Also present were the Phillips and the Tindalls and most of the Kents and Gloucesters. Absent were the Duchess of Cornwall, who had other official commitments decided before the wedding date was set (for the tabloids and some royal watchers who think this was a snub: you have won the competion of sillyness) and Princess Alexandra, Lady Ogilvy.

Present were also representatives of various charities which Princess Eugenie is associated with as well as many other relatives and friends. 850 people were invited to attend the ceremony and the reception, and judging from the various news reports, lots of celebrities were in attendance. As the wedding took place in the middle of the day while I was at work, I have not been able to watch much, and  will therefore not comment on all the guests. I am sure a list will be compiled at Nobiliana in the near future.

The wedding ceremony was followed by a reception in  St George's Hall hosted by the Queen and later a party at The Royal Lodge.
Posted by Dag T. Hoelseth at 21:42