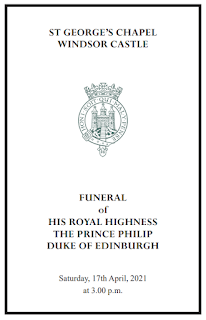 The funeral procession, which started at 2.50 p.m. local time, took place from the State Entrance to the chapel. The coffin of the duke was carried by a customised Land Rover. Behind it walked members of the royal family – the Prince of Wales, the Princess Royal, the Duke of York, the Earl of Wessex, the Duke of Cambridge, Peter Phillips, the Duke of Sussex, Tim Laurence and the Earl of Snowdon – while other members had driven to the chapel by car in advance. More details can be read at the official website.

Due to the pandemic and Covid-19 protocol, only 30 people were allowed to attend the funeral service. These were:

In other words – besides the widow the serivice were for the most part attended by children, children-in-law, grandchildren and their children – as well as a few other relatives. The Duchess of Sussex decided to remain in Los Angeles on advice of her doctor. The Hereditary Prince of Baden, the Landgrave of Hesse and the Prince of Hohenlohe-Langenburg represented the sisters of Prince Philip, while the Countess Mountbatten of Burma was a good friend and married to Norton Knatchbull, the 3rd Eaarl Mountbatten of Burma, a relative on his mother's side.
The funeral was a so-called «Ceremonial Royal Funeral», the same as that of the Queen Mother in 2002. The Dean of Windsor, David Conner, conducted the service, while the Archbishop of Canterbury, Justin Welby, pronounced the blessing. The full Order of Service can be viewed here.
The congregation wore masks for the service and the members of the royal family wore day dress or morning coat with medals.
As described by the official website, due to the public health guidelines, some of the funeral plan had been modified, «although the day was still be very much in line with His Royal Highness’s wishes». He had himself decided on the hymns and other music and that there should be no sermon. All in all it was a simple and beautiful service. What I will remember first of all is the sight of the queen, sitting all by herself in the choir , due to the health guidelines no-one could sit close to her and comfort her ...
The coffin was lowered into the royal vault at the end of the service. After the archbishop had pronounced the blessings and the national anthem was sung by the choir, the members of the royal family and members of the Duke of Edinburgh's family left the chapel via Galilee Porch.
The funeral was televised. The broadcast started already two hours before the service here in Norway. The historian Trond Norén Isaksen was one of the commentators on TV2.