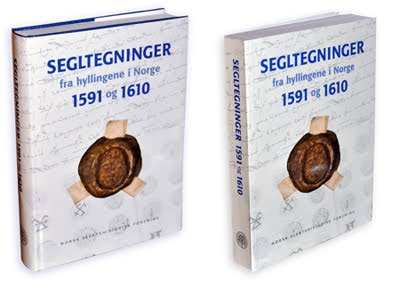 The publication Segltegninger fra hyllingene i Norge 1591 og 1610 ("Drawings of Norwegian Seals from 1591 and 1610") finally came on the market this week. The long-awaited book is published by Slektshistorisk Forlag AS, which is owned by Norsk Slektshistorisk Forening (NSF; The Norwegian Genealogical Society). The editor of the work is Anders Bjønnes, while the other members of the editorial committee are Svein Becken and Håvard Blom, all active members of the NSF. Contributions by Halvard Bjørkvik, Reidar Kjellberg, Anders Bjønnes, Hans Cappelen and Terje Gudbrandson. ISBN: 978-82-998428-0-8, price NOK 499 + P&P. 449 p., + name and place register.
On the back of the cover the following is written in English about the book:


At Akershus Castle Christian IV was sworn allegiance to as King of Norway in 1591. His oldest son, "the chosen prince" Christian, was honored with the same ceremony in 1610. Representatives from the cathedral chapters, local clergymen, burghers in the towns and peasantry brought with them sealed authorisation letters. The nobility attended in person and issued their own documents of allegiance - the one from 1591 is preserved.
The seals on these documents, published in this book, are an interesting source of material in many respects. Several articles on relevant themes are also included. This publication by The Norwegian Genealogical Society should therefore be of great interest also to researchers outside Norway.

As stated in the foreword of the book, the seals are "an interesting source of historical material seen from a genealogical point of view and they are primary sources of information relating to the history of personal names, art history and heraldry." The book is written in Norwegian, but there is an English summary at the end of each chapter.
The work on this publication was commenced in connection with the 75th anniversary of The Norwegian Genealogical Society in 2001, but obviously the task of completing it has been demanding. An inheritance from the late Margit Louise and Svein Holger Syvertsen has helped to fund the completion of the publication, and "Drawings of Norwegian Seals from 1591 and 1610" is therefore dedicated to their memory.
I have been a deputy member of the committee of The Norwegian Genealogical Society since May 2009, but I have not been involved in this project at all, except for giving a hand in the packing and distribution of the book after it arrived from the printers (see photos from the packing last weekend here). As I am first of all an "post-Napoleon historian" and certainly not an expert on heraldry, I am not going to review the book, so I will limit myself to the short presentation above.
The book looks great, though, and I am looking forward to studying it more closely.
If you are interested in the book (only the hardback is now for sale), please see NSF's website for more information. A subpage entirely dedicated to the publication - http://www.genealogi.no/segl - will soon be available.